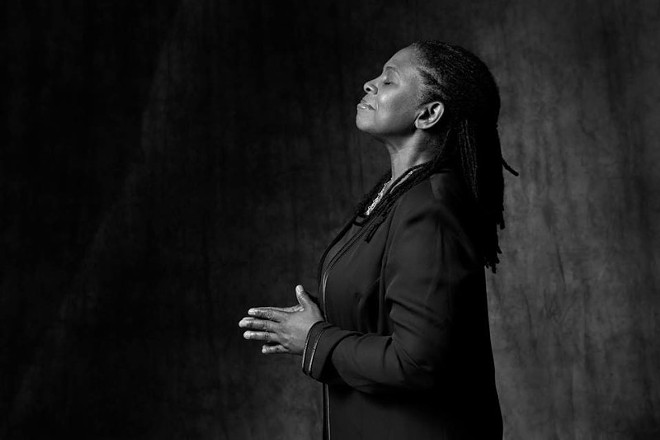 Ruthie Foster
8 p.m. Friday, January 17. The Sheldon Concert Hall, 3648 Washington Boulevard. $30 to $40. 314-533-9900.
On her most recent album, Joy Comes Back, veteran gospel-blues singer Ruthie Foster takes her listeners back to church — literally and metaphorically. Foster grew up in Caldwell, Texas, and was raised on the gospel music and preachments of the New Hope Missionary Baptist Church. No one who has followed her career would miss her gospel roots, but reuniting with her earliest community expands Foster’s own community of sounds and stories. She rocks the working class on “Working Women,” croons and sways on the soul standard “Loving You Is Sweeter Than Ever,” stomps the hell out of Sabbath’s “War Pigs” and even out-country-souls Chris Stapleton on his own “What Are You Listening To?” Across the diverse material, Foster’s supple phrasing and dauntless faith in the power of a great song are irresistible.
Commercial Break: Clayton Jones is a St. Louis native who makes his home in Nashville, where he's developing his country and pop career. He's also the most recent winner of the St. Louis Sound Competition for his song "Ringleader," which you'll no doubt hear on the Sheldon Stage during his opening set.
—Roy Kasten

Lamar Harris & the L: The Love Below Theory
7:30 p.m. and 9:30 p.m. Friday, January 17 and Saturday, January 18. Jazz St. Louis, 3536 Washington Avenue. $10 to $21. 314-571-6000.
The Love Below just may have broken Andre 3000. The 2003 release, one half of Outkast's massively successful double album Speakerboxxx/The Love Below, was shocking in its ambition and stylistic range, largely abandoning rap in favor of elements of pop, funk, electro and jazz styles while earning Andre comparisons to Prince. Its lead single “Hey Ya!” was one of the most inescapable of its time, pumping out of what seemed like every set of speakers in the nation on radio stations ranging in format from hip-hop to adult contemporary. But that massive success came with a price. Collaborators have said that the rapper seemed depleted by the end of the recording process, for which he worked at four studios simultaneously to generate his portion of the 120 tracks that were recorded in total for the double album. Save for the tracks on the group’s followup Idlewild, which served more as a soundtrack for the movie of the same name than as an Outkast album proper, Andre has largely stepped away from music, much to fans’ lament. That unintended consequence aside, The Love Below is inarguably a classic, and this tribute show by St. Louis stalwart Lamar Harris will surely be one for the ages.
Four Times and it Don't Stop: With two shows Friday and two on Saturday, you have four chances to catch this one. Would it be crazy to attend all of them?
—Daniel Hill

Yes We Can: A Tribute to Allen Toussaint
8 p.m. Saturday, January 18. Delmar Hall, 6133 Delmar Boulevard. $15. 314-726-6161.
While he’s rightly revered in his hometown of New Orleans, the pianist, songwriter, arranger and producer Allen Toussaint is not exactly a household name outside of the Crescent City. That’s a shame — his work with everyone from Lee Dorsey to the Meters to Elvis Costello brought an erudite grace and unmistakable groove to funk and soul music. Toussaint passed away in 2015 but his influence is felt all over the city, and many of the bands that borrow from his songbook are gathering to pay tribute this weekend. “Yes We Can: A Tribute to Allen Toussaint” will feature a rotating cast of performers, including members of the Funky Butt Brass Band, Al Holliday’s East Side Rhythm Band, the Provels, Kevin Bowers’ Nova, Dave Grelle’s Playadors, Gumbohead and many more.
You Will Not Lose: Portions of the ticket sales will benefit two fitting charities: the St. Louis-based Pianos for People and Toussaint’s own New Orleans Artists Against Hunger and Homelessness.
—Christian Schaeffer