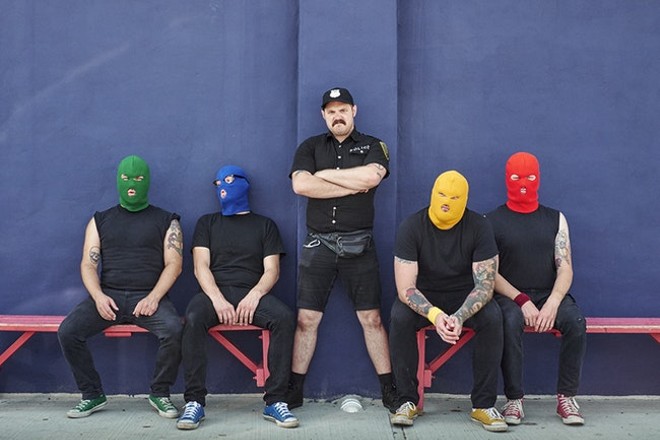 Amy LaVere
8 p.m. Friday, October 11. Foam, 3359 South Jefferson Avenue. $7. 314-772-2100.
On her latest record, Painting Blue, Amy LaVere takes a swing at Elvis Costello’s pensive and existential song “Shipbuilding.” His 1983 version has the grand sweep of an operatic elegy, with clangorous grand piano and a heartbreaking Chet Baker trumpet solo; LaVere’s casts the song in miniature with a tinny acoustic guitar and sweetly wheezing accordion to ask questions of war, duty and family. That’s a good snapshot of her gift at taking big concepts and shrinking them to fit her rootsy, occasionally bluesy songs, delivered with a voice best heard up close in an intimate setting. This week, Foam should fit that bill nicely, with LaVere joined there by regular collaborator in marriage and music Will Sexton. Strangs n’ Thangs: Local string-abusers the Hobosexuals and Aught Naughts will open the show.
—Christian Schaeffer

Luna
8 p.m. Friday, October 11. Off Broadway, 3509 Lemp Avenue. $25 to $30. 314-773-3363.
Since reforming in 2015, Luna has often revisited the hallowed ground of Penthouse, its third and most haunting and cohesive album. Recorded in 1995 in New York City, the album defines an urban and urbane sound that was archly counterposed to both the ironic college rock and grunge-driven trends of its day. It’s a guitar lover’s slowburn fever dream, filled with sounds and textures that even the band’s heroes, the Velvet Underground and Television, hadn’t explored. Songwriter Dean Wareham channels a prowling, desperate sense of mystery, much like Lou Reed and Tom Verlaine, but with his own droll wit and decadent sense of wonder. Alienation has rarely sounded so sublime as on Penthouse. The band will revisit the album (and much more no doubt) for this St. Louis date, which means this will be one of the rock shows of the year. Pay Now or Suffer Later: Luna’s last St. Louis show, in November 2017, sold out quickly, with ticket resellers reaping the benefits. Don’t get burned this time.
—Roy Kasten

Masked Intruder
8 p.m. Wednesday, October 16. Off Broadway, 3509 Lemp Avenue. $18 to $22. 314-773-3363.
Take the Ramones, ditch the leather jackets in favor of colorful ski masks, and rewrite the band’s oeuvre to focus more specifically on the criminal aspects of love and relationships, and you’ve got Masked Intruder. Since 2010, this group of dedicated pop-punkers have built a fervent following via hooky earworms for days and a hilarious gimmick that paints the band as criminals on parole, with their parole officer, Officer Bradford, always in tow. The band’s lyrics can border on terrifying — “No one in the world can make me feel the way you do / That’s why your ADT security can’t keep me away from you” — but their saccharine-sweet delivery and tongue-in-cheek intent assure that the joke always lands. The band’s latest, III, released in March on Pure Noise Records, doubles down on everything Masked Intruder does best, resulting in a glossy, smooth production of poppy tracks sure to be entered as evidence in a court case one day. Co-Conspirators: Like-minded punk acts the Bombpops and Tightwire will open the show.
—Daniel Hill