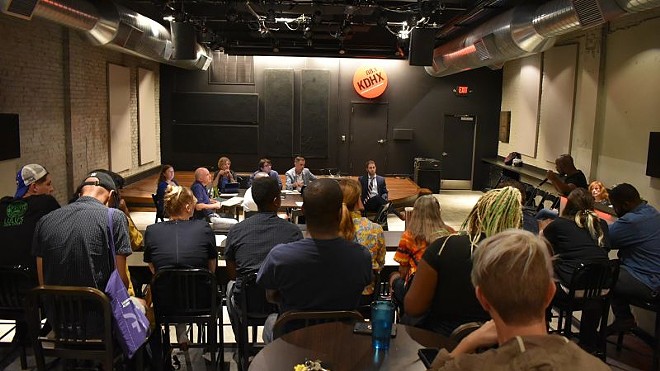 A pair of public meetings that were set to take place at KDHX (88.1 FM) to address recent allegations of racial insensitivity and mismanagement against the station's top brass have been canceled less than 24 hours before the first was set to take place.

The public forums, which were announced at a meeting of the station's board of directors on September 16 and which were to be facilitated by the National Conference for Community and Justice (NCCJ), were scheduled for today and Monday.

In an invitation sent to donors on September 20, the station wrote, "Over the last year, KDHX has been deeply engaged in a conversation about who we are, what it means to fulfill our mission of building community, and what our future holds. We want to hear from our community. On behalf of the Board of Directors, we invite you to participate in upcoming Listen Sessions."

The message included a link through which would-be attendees could RSVP and stated that just 50 slots were available for each meeting. The form within asks for a name and email address, and it displays a public tally of the number of slots remaining. As of this morning, all of the slots were spoken for.

Despite the obvious show of public interest, KDHX's leadership opted to cancel the forums at the last minute. A form email sent out on October 1 to those who RSVPed states that the station had "concluded that these sessions may not be the best forum to gather feedback. Therefore, the Listen Sessions have been canceled at this time."

A second email, sent to KDHX associates by board president Paul Dever and obtained by the RFT, uses similar language but includes a little more detail:

[W]e concluded that the sessions will not be the best way to gather constructive feedback, so we’ve canceled them.

The board has heard all the complaints from ex-employees and we have looked into them. Kelly’s dismissal is not on the table.


The "Kelly" in question is KDHX executive director Kelly Wells, who has been at the center of a series of complaints by current and former employees and volunteers at the station who alleged instances of racial insensitivity, mismanagement of funds and an overall culture of dysfunction at the station in an anonymous whistleblower email delivered to media earlier this year. (For a deep dive into the specifics of that email, see our July cover story.)

KDHX leadership, including Dever and Wells, have pushed back strongly against the email's claims and hired a law firm to investigate them. They claim the now-completed investigation cleared the station of nearly all the allegations. Meanwhile, several of the ex-employees whose experiences were included in the whistleblower email's claims say that investigators never contacted them.

KDHX's September board meeting included a public forum in which members of the community were invited to speak for three minutes each about matters related to the station. Approximately 30 people, including listeners, donors, DJs, volunteers and current and former employees, were in attendance. The forum focused nearly exclusively on the whistleblower email and its claims. Some expressed support for Wells and the board, most criticized both and some even called for Wells to be fired.

KDHX leadership had little to say in response to anyone who spoke at the forum. Upon arrival, attendees were asked to provide their names and email addresses, and during the forum, Dever explained that the board would be listening at this meeting but not commenting. He said the comments from the public would be compiled with those that came out of the (now canceled) public forums that were scheduled to begin this week, and that if anyone wanted a response to their specific remarks they should say so and expect an emailed reply.

RFT reached out Wednesday to multiple people who spoke at the forum; all say they have not gotten any reply from KDHX since the meeting.

Meanwhile, that silence has crossed over into internal communications within the organization as well. In an email thread obtained by RFT, several of the station's "associates," who have their own regular meetings and even the power to elect board members, according to the station's Governance page, repeatedly pressed for answers from Dever and Wells as to the specifics of the now-canceled public forums and were met with total silence.

The first email in that thread was sent on September 18. It reads: "Other than giving the dates (October 2 and October 7) at this week’s board meeting, has their [sic] been an official announcement with time and location of the meetings, Paul D.? Advance notice time is rapidly decreasing."

More than a week later, on September 28, following a lot of back-and-forth and confusion between the associates but no response from Wells, Dever or anyone on KDHX's board, Jeffrey Hallazgo, better known as Dr. Jeff, longtime host of KDHX's The Big Bang program and former KDHX board president, took to the thread with a lengthy screed.


This thread is now 11 days old. Numerous e-mails have been posted. Numerous questions have been posed to both the board president and the executive director. To this point, there has been no response whatsoever, which is very atypical and somewhat disturbing.

In the past, when there have been questions asked regarding much lesser issues, correspondence has been punctual, responses have been prompt, and issues have been addressed if not completely resolved. However, at such a crucial juncture in our organization’s existence, there has been absolutely no communication from anyone in positions of management with regards to this thread.

It does not seem to be too much to ask for any kind of response to a question from the president of the board or the executive director. The board president is the responsible officer of the organization, and as such there is a certain obligation to respond to the people in your organization. (As a reminder, I was not only the longest standing board member in the history of the organization but also the previous board president, am well familiar with the obligations that come with the position, and can not fathom not responding to any type of correspondence for such an extended period of time as this.) The total lack of response is, at best, disappointing and, at worst, infuriating.

Hallazgo goes on to add that the station's DJs, who work on a volunteer basis, have been bearing the brunt of the public's outrage in regard to the station's current strife and leadership's response to it.

"I myself have received calls in the studio and have encountered people outside the studio asking what is 'wrong' with KDHX," he writes. "In one instance, one DJ told me that he/she was approached by someone and asked if he/she worked at KDHX; when he/she responded yes, the response was 'F*ck You, KDHX!' So, even though we supposedly met goal during the last drive, all is not as rosy as you may think it is. Outside the walls of the station, the perception of this radio station and this organization at this time is not good."

We've reached out to Dever and Wells for comment on the cancellation of the public meetings. We've not yet heard a response.