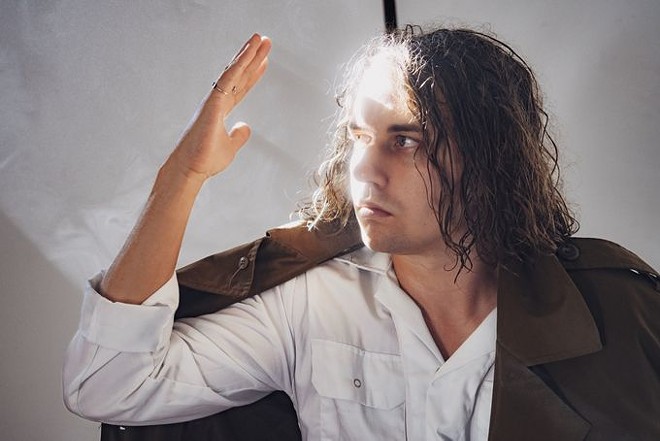 Kevin Morby and William Tyler
6 p.m and 9 p.m, Thursday, September 12. Native Sound, Ohio Avenue and Cherokee Street. $35. facebook.com/nativesoundrecording.
There’s a disheveled loucheness to Kevin Morby, and that’s not just because he appears all shirtless and bedroom-eyed on the cover of his latest, Oh My God. Even the opening title track suggests a certain dashed-off quality, as a syncopated piano riff gets pounded out on a sweetly out-of-tune upright. But Morby has carved out a niche for himself as a maker of nuanced, harmonically rich indie rock; his latest album employs subtle percussion, angelic choirs and a recurring saxophone that serves as a Greek chorus. Morby will be joined by noted instrumental guitarist William Tyler, whose just-released Lagniappe Sessions EP features covers of Fleetwood Mac, Yo La Tengo and Anton Dvorak.
Natives Only: Morby and Tyler will be playing two set at Cherokee Street’s Native Sound, the recording studio helmed by David Beeman and Ben Majchrzak. Expect an intimate set from both performers; check Native Sound’s Facebook page for ticket availability.
—Christian Schaeffer

Acoustic Music Festival
12 p.m. Sunday, September 15. The National Museum of Transportation, 2933 Barrett Station Road, Ballwin. $5 to $20. 314-965-6212.
Acoustic music, especially that of the folk or Americana variety, has always had a certain fascination with trains. It stands to reason: Any traveling troubadour criss-crossing the country in search of the soul of America is gonna have some time to kill while riding the rails, and what more portable instrument is there than a good ol' acoustic guitar? So it makes sense that the National Museum of Transportation is playing host to the Acoustic Music Festival this weekend, bringing a baker's dozen of St. Louis' best acts to perform relatively sans electricity and surrounded by locomotives (and, of course, buses, streetcars, planes, etc.). Performers include Jenny Roques, Rum Drum Ramblers, River Kittens, the Red-Headed Strangers and more, and there will be food trucks and craft vendors on hand as well. There's even talk of secret sets hidden throughout the museum, making for a unique experience sure to satisfy the explorer in all who attend.
Where's the Stag Though? This show was set up by erstwhile Stag Nite impresario Johnny Vegas, marking a reunion of sorts for many of the performers in attendance who frequented the Deer Beer event before Vegas packed it in.
—Daniel Hill

Sun Kil Moon
8 p.m. Sunday, September 15. Delmar Hall, 6133 Delmar Boulevard. $20 to $30. 314-726-6161.
On stage and off, Mark Kozelek can be a collossal, trolling, misogynist asshole. He can also be an artist of breathtaking wonder. Performing and recording largely, but not exclusively, under the Sun Kil Moon moniker, he dares anyone with a conscience to walk the fuck out and dump his records at Decluttr.com. And then the prick just goes on writing searing, honest fifteen-minute songs about gun massacres and starving kittens, and recording a harrowing charity album for street kids in Argentina. Often, with just a guitar and a few haunting vocal loops, as on most of his single greatest album, 2014’s Benji, Kozelek never makes listening or choices easy. Truth, like Kozelek’s music, demands a brutal reckoning that, against all reason, can still be cathartic.
Let it Bleed: The most common description of Kozelek’s songwriting is “stream of consciousness,” which is correct, if that stream is the opening of a vein in the soul.
—Roy Kasten