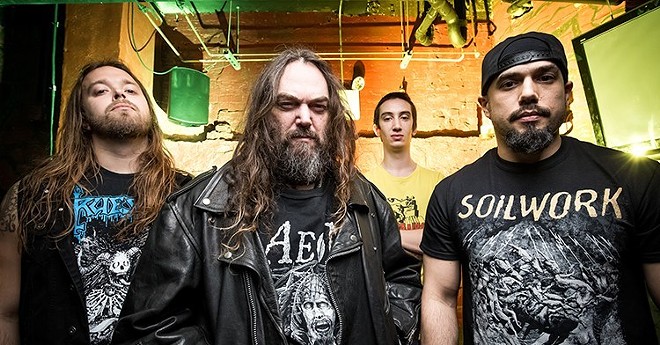 This reporter took a break from packing the cooler for a fifth FTA to talk with Full Terror Assault jack of all trades Shane Bottens about the festival's past, present, and future.

“My favorite thing is all the cool people I’ve met doing this thing,” says Bottens, organizer of the fest. “For me that is the best part about it: the people. Sometimes it’s what keeps me motivated, just knowing how much this fest means to all of them.”

A festival this size would normally be operating with a staff of hundreds, but Bottens and his small crew undertake the entire event year after year with the bare minimum.

“The biggest thing I have learned so far is you have to build a fest like this, and that takes time and patience unless you have a shitload of money, which I do not,” Bottens says. “It’s been five years, and the fans that come every year are lifers. Every year we are getting a little bit bigger, so every year we try to make our lineup better than the year before and keep the prices as low as possible.”

If bring-your-own-food-and-beverages camping and heavy metal legends at a bargain price aren’t enough to get you on the road, FTA offers even more bang for your buck with all day and night entertainment options including DJs, movie screenings, gravy chugging competitions, mechanical bull riding, tattoo parlors, regional beer swaps, rock & roll merchandise vendors and surprisingly appetizing food trucks. Catch your favorite rock stars cruising the grounds in golf carts after their sets looking for beer and high fives. Take a dip in Lake Hepatitis, where the juggalos once swam, or a stroll on the banks of the beautiful Ohio River. Lay out under the stars with a loved one and drift peacefully off to sleep to the piercingly shrill screams of the King Diamond karaoke contest.

Still on the fence? We’ll convince you with a list. Presented with little to no bias or feasible order, here are the top ten reasons you should attend Full Terror Assault.

1. Community. Camping and cooking and dancing and singing and moshing and drinking with a somewhat small but always growing group of misfits and metalheads from all over the country for three days leaves you with no shortage of opportunities to meet and reconnect with new and lifelong friends.

2. The Bands. Thrash, death, black, power, grind, prog, hardcore, slam, gore and a bunch of other words that mean “heavy metal” — Full Terror has them all. Over 50 bands over the course of three days means there will be something for every metal fan out there, even the most cynical old head talking about how he had to push his Marshall stack upstairs to load in and out of venues in his day.

3. The Ghosts of Juggalos Past. Explore the campgrounds that formerly played host to the Gathering of the Juggalos. Go on a hatchet man scavenger hunt. See the infamous whoop whoop barn or listen to local legends of Juggalo beef gone wrong. There are still plenty of interesting characters roaming the campgrounds eager to share memories of the golden days.

4. BYOB! As long as it’s not in a glass container you can bring in as much booze and food as your vehicle can carry. Grab a cooler with wheels and you have your drinks and your concert seat all in one. The convenience and affordability of watching bands while pounding hot dogs straight from the campfire can’t be beat. Bring an extra round of meat for late-night grilling and barter for booze and high fives from campsite neighbors.

5. You Need a Vacation. Let’s face it: Being cramped up in an office or a kitchen or stuck on a job site all day sucks. Summer is almost over and you spent way too much time indoors. This is your last chance to not totally blow it. Get your ass out on the road and head to the woods. A few days of pristine riverfront views and wide-open starry skies will do wonders for your gunked-up brainworks.

6. Exhorder. You know, the band that everyone says inspired Pantera, or as a lot of metal fans like to say, the band Pantera ripped off. Check ’em out live for yourself and form your own opinion. Is Exhorder the grooviest metal band of all time? Or do hip old metal fans just love to bash Pantera?

7. Supporting Your Metal Brothers. Full Terror Assault is an independently owned and operated festival run by hardworking fans of heavy metal. In order to continue the growth of this awesome event, Full Terror needs all the metalheads of middle America to come together and spread the word to keep the turnstiles turning. The bigger the turnouts, the bigger the bands — and the better the show will get.

8. Beer Swap! Have you heard of that new cryptic dark lager available only on the East Coast after midnight during the passing of a full moon? Someone coming to FTA probably has it! Hit up the Full Terror Assault regional beer swap and trade your way to a tour de force of nationally selected hops and barley.

10. Hammerhedd. Kansas City’s own pre-teen thrash prodigies and viral video sensation kick off Saturday’s lineup. Come see the future of thrash as these three young brothers play one of their first road shows.

Still not convinced? Bottens says just go ahead and take the plunge, because once you experience Full Terror Assault, you’ll be hooked.

“Come out and see what you’ve been missing,” he says. “If you come once, I’ve got you, ’cause you will be back every year. There really isn’t anything like this in the United States. I mean BYOB, camping and heavy metal? The real question is, ‘Why are you not already here?’”