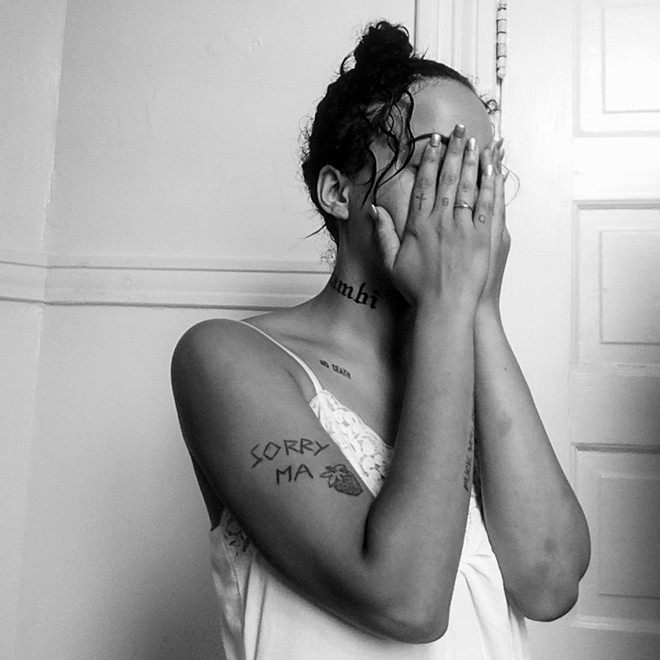 Bedroom pop musician Kijani Eshe is equal parts endearing slacker and nascent diva, with an open, inviting manner only slightly undercut by a prominent tattoo that reads “fuck you pay me.” A native of St. Louis, Eshe first became interested in a career in music when their mother, a guitar player, married a record producer who introduced them to the mastering process and who built his own effects pedals.

Four years ago, at the age of seventeen, Eshe began working at the Mud House on Cherokee Street, meeting prominent members of the local music scene. A classically trained violinist, they taught themselves bass in high school, and at the time, it served as their primary instrument. Eventually, Eshe was invited to play with a few acts around town.

“In St. Louis, for most things, you have to know somebody,” Eshe says. “And so, once you know somebody, then it all becomes accessible.”

In July 2018, Eshe built on these experiences to release their first solo EP, DEMO, under the moniker SEX BAM BAM. While admittedly raw, the wild experimentation and keen ear for melody on display hinted at a major talent. Then, earlier this year, Eshe officially arrived as an artist with two impressive song collections: St. Louis Is for Lovers, which dropped in February, and Sun Sets Over Ikea in June.

The former took more than six months to record, and by the end of the process, Eshe was feeling burned out. But they “really wanted to do a summer album, a heartbreak summer album for all the hurters.” So Eshe completed the second project within a matter of weeks. And despite, or perhaps because of the quick turnaround, Sun Sets Over Ikea demonstrates a newfound confidence and clarity of vision — especially tracks like “$$$” and “Devil Don’t Pay / But Prayers Don’t Pay My Bills,” which use sharp hooks and precise lyrics to subtly deconstruct capitalism and its influence on art.

Thanks to those efforts, Eshe is one of the rising stars of Pü Fest VI. The event was founded in 2014 as a tongue-in-cheek underground rejoinder to the family-friendly mainstream approach of LouFest. Until last year, the two festivals were scheduled to occur on the same weekend. But with the demise of the larger gathering, Pü Fest now functions independently. The 2019 installment, which takes place Saturday, September 7, at Foam and Sunday, September 8, at Off Broadway, features a typically eclectic lineup — including a farewell show from screamo band Anodes and the highly anticipated reunion of Demonlover.

It says a lot about St. Louis that Pü Fest, the celebration of D.I.Y. fortitude, outlasted its commercial namesake by two years and counting. In many ways, it’s a testament to the diversity and reach of local artists, as well as the loyalty of their fans. But it also speaks to the way the festival articulates a common vision — simultaneously familiar and strange, accessible and just gritty enough to feel relevant — for a music scene that often struggles to feel cohesive.

It’s an idea that tends to attract musicians like Eshe, whose work relies on those dualities. While Eshe listens to and takes inspiration from commercial acts like Frank Ocean, Smino and Solange, they create their own albums from a much more intuitive place. On both St. Louis Is for Lovers and Sun Sets Over Ikea, Eshe wrote, performed and recorded all of the parts alone. For most of the tracks, Eshe used an Akai drum machine that they borrowed from a friend, who later forgot about it, and a broken Korg synthesizer that was similarly abandoned. “It was all about the musical aspects of it,” Eshe notes — experimenting with new instruments and techniques.

As Eshe gains experience, though, they are becoming more intentional with the glitches and idiosyncrasies in their production, using the results to build a distinctive sound. Eshe recently revisited a song from St. Louis Is for Lovers, which was recorded entirely on a smartphone. At first, they were disappointed by the unusual “wavy feedback” on the track — a byproduct of running the instruments through an amp. But after a few listens, Eshe was so taken by the noise that they sampled it for a new composition. “I’m trying to get a little weirder with it,” Eshe says. “But I don’t know. I’m figuring it out.”

Some of that reluctance involves the inherent conflict between popularity and authenticity. In a charming approximation of a Buddhist koan, Eshe says, “I want to be rich for sure. Because I have no goals in my life.” At the moment, Eshe’s music shares a raw, improvised quality with fellow Midwesterners like CocoRosie and White Flight. But there are also hints of Smino and early SZA, artists who used their outsider appeal to break into the mainstream. Eshe hopes that their own albums become equally definitive for listeners, the soundtrack to a particular moment in their lives. They try “to set an atmosphere, you know, and tell a story. I want it to be an experience every time.”

Still, Eshe is in no hurry to become a celebrity. They only perform once or twice a month to avoid burning out.

“I’m mostly trying to get paid for the shows I play,” Eshe laughs.

Between concerts, Eshe obsesses over television, watching the same episodes of Gossip Girl and The Office on repeat. But after Pü Fest, they plan to take a short break to focus on the next album. This time, they are working more slowly, listening to the same track “a thousand times” before stepping away and deciding how it fits with the bigger picture. And as the music changes, Eshe grows along with it.

“I feel like there are good things to come.”