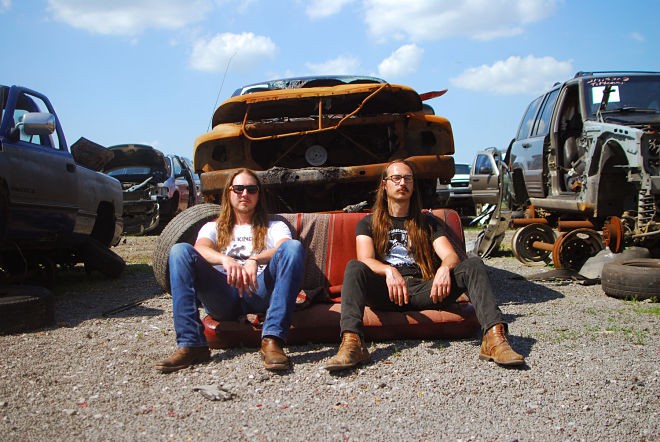 Josh Ritter
8 p.m. Thursday, August 22. The Pageant, 6161 Delmar Boulevard. $25. 314-726-6161.
In the most overcrowded demographic field in the history of music, the white male singer-songwriter, Josh Ritter has somehow set himself apart. Some two decades into a prolific career, Ritter has never needed gimmicks or hard swerves from his core sound, an effortlessly melodic fusion of anthemic guitar rock and plaintive folk, because he has a bottomless reserve of killer lines and faith-restoring sincerity, whether documenting a grueling divorce or slaying political dragons or chopping and screwing with myth, literature and murder ballads. And then there’s that voice: It always rings out like the archetype of the rakish troubadour with a soft spot for hugs after the gig. Against considerable odds, nobody else sounds like the kid from Moscow, Idaho.
Ready For the Big Stage: St. Louisan Beth Bombara doesn’t get many chances to play venues like the Pageant, but on the strength of her new album Evergreen, her opening set at the venerable hall won’t be her last.
—Roy Kasten

Summer Cannibals
8 p.m. Friday, August 23. The Duck Room at Blueberry Hill, 6504 Delmar Boulevard. $10. 314-727-4444.
The music that Summer Cannibals creates — quick, brash, delivered with a mix between a sneer and an eye roll — doesn’t seem to be freighted with too much drama. That’s one of the benefits of pop-punk, after all. But after a few years of creative and personal turmoil in the band’s orbit, including a new line-up, a new label and a scrapped album, the Portland-based quartet is back with Can’t Tell Me No. It’s an appropriately defiant title, and singer/guitarist Jessica Boudreaux channels some of the past few years’ frustration and perseverance in the group’s hooky and propulsive songs.
Arcade Fighters: The video for “Can’t Tell Me No” finds the band performing amid the glow of a vintage arcade — a perfect aperitif for Joe Edwards’ collection of coin-operated amusements at Blueberry Hill.
—Christian Schaeffer

Whiskey War Festival 8
2 p.m. Saturday, August 24. South Broadway Athletic Club, 2301 South Seventh Street. $15. 314-776-4833.
Jake and David Maness are now on their eighth year of their homegrown festival Whiskey War Fest, and the whole St. Louis region is all the better for it. The aptly named Maness Brothers have made an annual tradition of their wide-ranging local fest, bringing rock & roll, folk, blues, metal and more together under one roof for a night of musical magic. Standouts from this year’s lineup include New York anti-folk artist Jeffrey Lewis, Legendary Shack Shakers vocalist J.D. Wilkes, Canadian juke-joint blues act Catl and California-based roots songwriter Sarah Rogo. Not to mention the Brothers themselves, purveyors of the shit-kickingest hard-driving blues-rock this side of the Mississippi.
Hometown Heroes: St. Louis musicians always make a strong showing at Whiskey War Fest, and this year is no exception. The Opera Bell Band, Devil’s Elbow, Rover, Mother Meat and Mammoth Piano are just a few of the must-see local acts rounding out this year’s bill.
—Daniel Hill