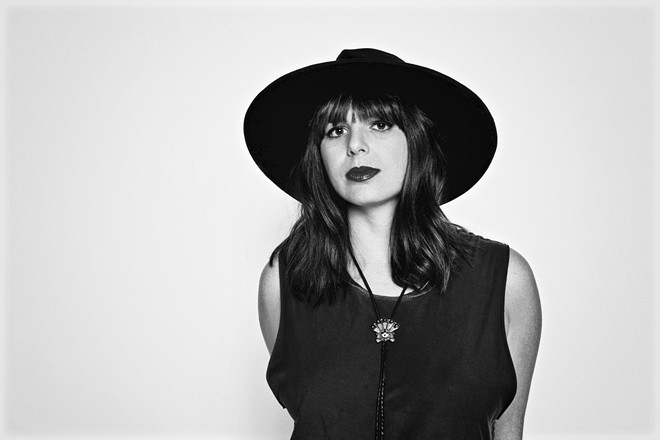 For her new album, Evergreen, songwriter Beth Bombara rode a fine line between pushing some creative boundaries and seeking a sense of comfort.

Familiarity was found by recording at Dan Mehrmann’s Jettison Studios, where she’d worked before. Though the rural Illinois studio is located within a reasonable drive of her South City home, Bombara preferred to make things a more immersive experience.

“We could’ve slept at home every day,” she says. “But we got an Airbnb really close to the studio. It solidified the process. We were just focused on this and not worrying about other distractions. This album was the most fun I’ve had in the studio. There’s always an element of pressure. I think a lot of it has to do with people feeling comfortable to be more experimental.”

She amends that final word to more specifically mean “off the cuff,” acknowledging that her band went into the studio with a new contributor. That’s multi-instrumentalist and co-producer John Calvin Abney, who had only a single rehearsal day with the remainder of her crew before going to record. His work on keys is heavily present on Evergreen, alongside the members of her touring group, which includes guitarist Samuel Gregg, drummer Mike Schurk and her husband and longtime collaborator Kit Hamon on bass, vocals and other instruments.

Abney’s presence as a new player in the mix afforded the group the opportunity to really push their boundaries, Bombara explains.

“It allowed us to come up with some really great ideas,” she says. “It wasn’t a set idea of, ‘This is exactly every single note that we’re playing.’ The songs were written, the basics were there, but [John’s arrival] made it a little bit more spontaneous.”

For this album, Bombara notes that there’s only a light smattering of acoustic guitar compared to previous efforts.

“This one’s definitely got more of a live rock band vibe,” she says. “I don’t know if that’s the exact right phrase, but my stuff in the past has had banjo, lots of acoustic guitar. And there’s hardly any acoustic guitar on the album, just a little bit. It’s me going back to my earlier, rock & roll days.”

For Evergreen, Bombara took some time in developing the songs, especially the lyrics. She recalls that at the start of the work, she took a five-day media fast: no books, no internet, distractions minimal. That approach, she says, drove her crazy for a day, but made sense only a day later. By the end of it, some material was beginning to come into sharper focus. She then took another new step, in co-writing a track that would become the single from the album, “Upside Down,” with fellow local songwriter Seth Porter.

“I like the idea of co-writing,” she says, “but when it comes right down to it, it’s intimidating. I’d only co-written with Kit prior to this and he suggested that, ‘You gotta go out and find somebody else to write with.’ So I called up Seth. I could tell he was hesitant. I told him that I had this song, but it was missing the words — well, I had one line of lyrics. I asked him to come over and we’ll sit, listen to the demo, just see if anything can happen. He came over, brought a six-pack and we played for a couple hours and came up with something totally great.”

She does take a moment to laugh that it almost felt like an awkward first date. But as the two got to work, she thought, “This is alright,” she says. “I don’t know if Seth would describe it that same way, but he might.”

In advance of the album’s official release in early August, Bombara’s got her band readied for more time out on the road, and she’s been working with a radio promoter, publicist and booking agent, a small team that she feels will allow her an opportunity to focus on the material more clearly.

Now a veteran with a half-dozen releases, she admits that she always forgets “how intense it is, how much time and effort it takes to put an album out. That’s been our focus these past four months.”

That work is paying off, though. In a few weeks, she and her band will be in town for the official release of Evergreen, a show that will take place at Old Rock House on August 9. The night prior, they’ll be playing a club in Nashville. That very afternoon, they’ll be playing a live set for a Nashville radio station. Pulling into St. Louis, she notes, the band won’t even have a chance to land at their houses before soundcheck and the hometown show. A hectic day, but one she doesn’t want to trade.

“The aspect of creating that I’m loving most right now is live,” she says. “Sharing that part of me with people, being able to interact with people in a real-life, physical situation. Obviously, I enjoy writing, recording. But the thing I get most-excited about is gigs.”