Five Years After Ferguson, Tef Poe Teaches Kids in the Middle East How to Rap 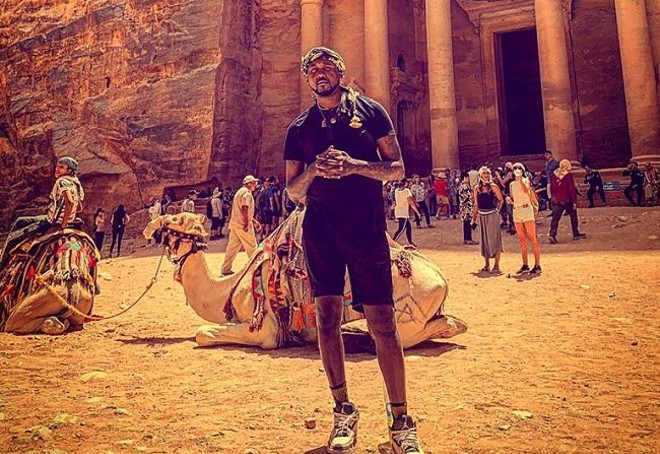 At present, St. Louis rapper Tef Poe is more than 6,000 miles away from his hometown, in the Arab country of Jordan, bordered by Saudi Arabia, Iraq, Syria, Israel and Palestine. He’s been sent halfway around the globe as an ambassador of hip-hop, representing the United States at large and black American culture specifically, and working to nurture a burgeoning rap scene in the Middle Eastern country by teaching a group of its young emcees the ins and outs of the industry.

Still, St. Louis is never far from his mind.

“Really it’s weird,” Tef, born Kareem Jackson, says. “Because I’m using the skills that I acquired from the St. Louis underground scene to help build a scene in a totally different country. I think back about the Hi-Pointe days. Learning about being on stage and how a crowd doesn’t have to naturally embrace you, how you have to train yourself to be embraced by the crowd. And just understanding that music is a universal language, as long as it’s good music.”

Tef has been sent to Jordan as part of the Next Level program, presented by the Meridian International Center through a partnership with the University of North Carolina, to work with Jordanian students through the U.S. Embassy and the Bureau of Educational and Cultural Affairs. He was afforded the opportunity through his record label, the esteemed Tommy Boy Records, which over the years has been home to such rap luminaries as Biz Markie, Afrika Bambaataa and De La Soul, alongside countless others.

He was chosen, in part, due to his teaching experience — as a recipient of the Nasir Jones Hip-Hop Fellowship, founded by rap legend Nas, Tef spent 2017 and 2018 teaching at Harvard through the school's W.E.B. Du Bois Research Institute. In other words, he has considerable experience at the front of the classroom.

“It’s really a program for artist-educators,” Tef explains. “An artist who isn’t a very good educator probably wouldn’t do good in this program, because you have to teach every day. You have to be able to really quickly adapt to the language barrier. Because I don’t speak the same language as these guys — they’re better at English than I am at Arabic. They know what I’m saying, for the most part, and then for the students that don’t know what I’m saying, one of the students will translate, or a translator will translate for us.”

Tef is one of a group of five artists that has been sent to the country to spread their love of hip-hop. He’s joined by a team of beat-boxers and a dance choreographer. Each day, he says, the country’s king, Abdullah II bin Al-Hussein, sends a bulletproof vehicle from the embassy to pick them up and take them to the school, where they teach from 5 p.m. to 9 p.m. Tef’s role is to teach the young students, who already have an interest in hip-hop, how to be effective emcees.

“They already had a hip-hop scene, so I don’t wanna say we’re birthing a hip-hop scene,” Tef says. “But we’re definitely beefing it up and adding creatine to it. Helping the artists with resources. We’re leaving behind a nice amount of equipment.”

To hear Tef tell it, the country’s rap scene is on par with any he’s encountered in the states. But, he explains, young rappers don’t necessarily have access to the tools and equipment they need to be effective. On top of that, it’s a Muslim-majority country whose culture isn’t as receptive or welcoming to hip-hop as some.

“The goal is to basically empower the hip-hop scene, and also do some cultural diplomacy between our country and their country. To showcase a different side of Americans, to also showcase a different side of black American culture, and to inspire artists that just don’t have access on a global level,” Tef says. “They’re really not typically living in an environment that empowers them to even think about being artists professionally or to even think that they can be involved in hip-hop.

“Even in some of the dance courses — I’m working with a choreographer from Philly by the name of Queen Dinita, and she’s trying to show them that it’s OK for women in the community to dance,” he continues. “And some of these young men, their fathers don’t understand why they wanna be dancers. These kids don’t come from easy lifestyles; they don’t have easy backgrounds. Some of these kids live in refugee camps. Some of these kids are fighting with their parents every day just to be a part of this program.”

Tef explains that the group is using the program as an opportunity to motivate the students and inspire them, and to show them that there’s nothing wrong with art, there’s nothing wrong with music. He also aims to teach them that hip-hop can lead to a better life, but that you have to push yourself and make your own opportunities. That ties, once again, to his experience coming up as a rapper in St. Louis.

“We had nothing,” Tef says of his hometown. “There’s no Def Jam down the street, there’s no million-dollar corporations coming to St. Louis, snatching rappers out and giving them careers. They have the same problems. Where do you find a way out when there’s no way out? How do you make a career for yourself doing hip-hop in a place that traditionally doesn’t embrace this type of music?”

Tef’s own way out came in a somewhat unusual way. Though he was already an accomplished rapper, particularly in the field of battle-rap, which Tef rode to a freestyle championship on BET’s 106 & Park, his national profile really rose in the summer of 2014 with his activism surrounding the death of Ferguson teenager Mike Brown. Tef was constantly in the streets protesting, and he’s one of the co-founders of Hands Up United, a community organization that sprouted from that activism.

During that time, Tef developed a friendship with noted intellectual Cornel West, who has taught at Harvard himself as well as Princeton and several others, and who was here in St. Louis to protest during what has since been dubbed the Ferguson Uprising. West remains a fan of Tef and even gave him a shoutout during a recent appearance on Joe Rogan’s podcast.

With the five-year anniversary of Brown’s death coming this week, Tef explains that he has mixed emotions about being seen as a figurehead for the movement that followed.

“I feel very blessed and gracious to be in a position to contribute to the city of St. Louis at a time we were really going through something, and I have a lot of respect and reverence for the families of victims of police brutality,” he explains. “But I also feel, in the aftermath of such type of tragedy, that a lot of people took advantage of our city and our willingness to embrace out of towners, and our willingness to embrace people that positioned themselves in the midst of the conflict. And all too often, for me on my end, I would have to keep digging even harder to place myself in this ecosystem as an artist, because every year around this time folks call me for interviews basically to exploit the situation, exploit the city and exploit the family for clickbait and personal gain within their own stories.”

Tef points to the national media types that essentially parachuted into the St. Louis area during the turmoil and, in his mind, used the situation to advance their own careers. Tef, meanwhile, grew up in the area, and his involvement was organic and built out of a love for the city and its people.

“So I really don’t necessarily wanna do media surrounding that because I wanna be respectful to Mike Brown and his family, and I also wanna be respectful to the city,” he says. “I feel as if we do a lot of work in the community 24/7 365, and if we could just get a little bit of that same type of support outside of when it’s glamorous or when it’s convenient to write stories about it, we’d be able to accomplish even more.”

Meanwhile, Tef is accomplishing plenty on his own — for his students in Jordan, for those he taught at Harvard, for those that benefit from the grassroots organizing in which he participated in St. Louis and beyond. He’s currently in the midst of writing a book about his story titled Rebel to America, to be released by Norton Publishing, which will touch, in part, on that time in Ferguson. But as far as Tef is concerned, his story, and that of St. Louis at large, still has much more to be told.

“I’m grateful that I was a part of the resistance and I’m grateful that I played a role in helping our city make history, because I feel like that’s the greatest rebellion of its type that has ever been seen in North America,” he says. “St. Louis made history and will continue to make history. That’s how I feel.”