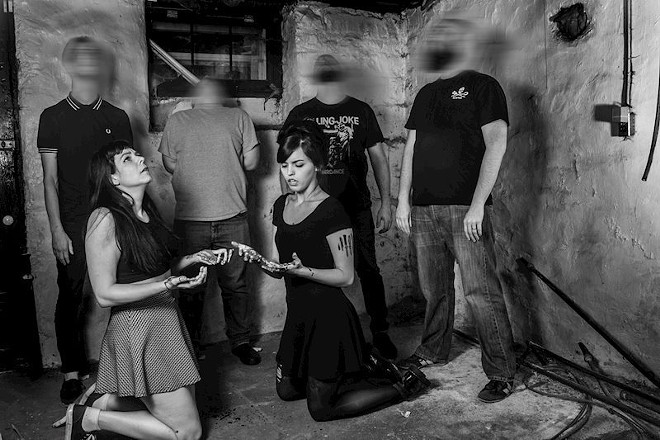 Lake Street Dive
8 p.m. Thursday, August 1. The Pageant, 6161 Delmar Boulevard. $27.50 to $40. 314-726-6161.
You would probably be right to assume that most students at the New England Conservatory of Music have their sights on the more “respectable” realms of jazz and classical, but the founding quartet of Lake Street Dive turned its tutelage into a winsome, harmonically dexterous folk-pop band. The past decade has seen LSD grow from a well-kept secret to a theater-filling Hydra of pop music, and last year’s Free Yourself Up kicks off with a set of songs written by bassist Bridget Kearney that are as smart as they are tightly constructed.
Live Once More: NPR junkies may have seen lead singer Rachel Price sitting in with Chris Thile’s band on the Live From Here recording back in May at Powell Symphony Hall.
—Christian Schaeffer

Redbait Record Release
3 p.m. Sunday, August 4. The Record Space, 8716 Gravois Road, Affton. Free. 314-437-2727.
St. Louis' Redbait is an activist collective first and an absolutely ripping metallic hardcore punk band in the vein of Tragedy second. Lyrically the group tackles subjects ranging from labor solidarity to racism to addiction to animal rights, pushing its activism through a blackened filter of tightly executed metallic riffs and the viscerally screamed vocals of co-lead singers Rebecca Redbait and Madeline B. This show is a release party for the band's New Age Records debut Cages, and it sees the group refining its sound with the addition of sludge, grind and black metal elements, making for a gripping slab of politically charged punk.
Matinee Madness: This early show will also feature performances by locals Bastard Squad and Man the Manipulator, as well as Nashville sludge/grind act Bled to Submission.
—Daniel Hill

Jade Bird
9 p.m. Sunday, August 4. Off Broadway, 3509 Lemp Avenue. $20 advance, $25 day of show. 314-498-6989.
Cross Loretta Lynn with Patti Smith and, oh what the hell, throw in Alanis Morissette and the Pixies while you’re at it, and you either get an unholy mess or you get Jade Bird. The 21-year-old UK songwriter and singer has been a twangy shooting star for less than three years, and the primary Americana institutions and scene haven’t a clue as to how to keep up. On this year’s self-titled album, her voice is as brash as the rhythms are bashing, and yet she generates the most power on spare, soul-wrenching ballads like “17,” a career-song of teen angst. Her voice is utterly original, utterly riveting.
On the Road Again: Jade Bird closes out this year’s Open Highway Music Festival, a near-week-long run of shows at Off Broadway that includes big names like North Mississippi Allstars as well as cult-favorites like John Moreland. If you have the stamina and a hearty liver, the VIP five-night pass is the way to go.
—Roy Kasten