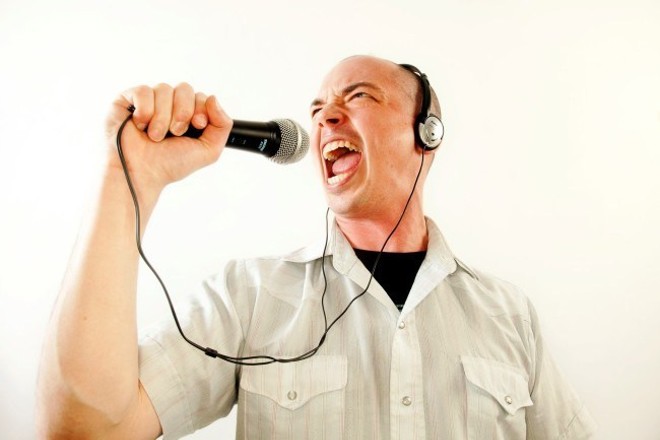 It’s getting late in Nick Vatterott’s set at the Beat Kitchen in Chicago when he decides to tell some one-liners. Before he begins, the St. Louis native explains that standup comedy school taught him that one-liners should be punctuated by a musical instrument between each joke. Vatterott doesn’t know how to play any instruments, but he says he’ll make music the best he can.

Then he starts: “I like ramen noodles,” he says, “but I always get that same lame prize. ‘Flavor packet?’” Vatterott then launches into a series of exaggerated noises dealt out in a jazzy rhythm that sound vaguely like a drum solo, but mostly sound ridiculous.

This routine, as captured on his 2014 album For Amusement Only, is a perfect microcosm of the comedian’s modus operandi. He can craft clever straightforward jokes, sure, but he’s itching to frame them in the bigger gag of an absurdist premise that occasionally pokes fun at the conventions of comedy.

“I just get bored with the same format all the time and the same way of doing everything,” Vatterott tells RFT. “And sometimes a way to switch that up is to sort of make fun of the form inside of it.”

And while he’s hardly the only comedian to play with standard comedic formats, Vatterott breaks from the norm like no other. Past bits include pulling a setlist as tall as himself out of his pocket, using a pre-recorded director’s commentary to satirically analyze his performance in real time and donning werewolf gloves to tell jokes in the persona of a monster.

That last idea made its way into a successful submission tape for the 2011 Andy Kaufman Award, which culminated in a talent show. Vatterott won the competition and with it the prize, which “seeks to recognize a performer who lives and works outside the ordinary, as Kaufman did” (other past recipients include Kristen Schaal and Reggie Watts). Indeed, Kaufman is a logical comparison for Vatterott, who is a big fan but interprets the legend differently than some.

“I love Andy Kaufman but I hate what some people got out of Andy Kaufman, which was like anti-comedy,” he says. “I don’t really want to do anti-comedy. I think you can make fun of comedy and not be anti-comedy at the same time.” In other words, for all his experimentation, Vatterott believes “you still have to tell real jokes.”

Vatterott didn’t arrive at this comedic philosophy immediately. Long before his appearances on Conan and Late Night with Jimmy Fallon, Vatterott was a fledgling comic at Mizzou in the early 2000s. He tried his hand at a few things: a humor column for the school paper, improv, and the local comedy contest at Deja Vu, the one venue for comedy in Columbia at the time. He’d also make drives to St. Louis and Kansas City for meager stage time, but it wasn’t until Vatterott dropped out of school and moved to Chicago that he found his voice working the Lyon’s Den open mic.

Primarily a music venue, the now-shuttered Lyon’s Den hosted a weekly open mic where comics such as Vatterott, Hannibal Buress, Kyle Kinane and Kumail Nanjiani honed their chops and had four minutes of freedom to try anything.

“I think we didn’t know how to do comedy, so we just did anything,” Vatterott says with a laugh. “Everybody tried everything there. Some of the weirdest stuff I ever saw was in that room.”

A cult of repeat customers and comics soon flocked to every show, forcing Vatterott to have a new four minutes every week. “I’m the comedian I am because of the Lyon’s Den,” he says.

As formative as that time was, some of Vatterott’s high-octane style is innate, especially when it comes to voicing characters in his sets.

“I remember waiting tables in Columbia, one of the waiters going, ‘You know, when you tell stories you do all the voices of everybody,’” he says. “And I didn’t even really think about it. This is years before I ever did standup.”

This skill proved vital to Vatterott’s most recent album, Krock90q.Buzz, in which he and producer Jesse Case create a scarily convincing full-length parody of purportedly “edgy” rock radio stations.

“That was just a funny idea to me, to sell an album like that that people listen to and wouldn’t get that it isn’t a real radio station at first,” he says of the 2018 release, which is replete with multiple characters and sound-effect-heavy interludes (“Here’s a dishwasher!”). While the fictional station takes aim at the genre more than any specific real life counterparts, Vatterott admits there was some local influence.

“Those radio station stingers on all those St. Louis stations were just so extreme,” he says, citing how promos were always “talking about how big the antenna is and how many megawatts [it has] and all these things you don’t even know if, is that a lot of megawatts or is that a few?’”

It’s not all a single-minded goof on radio – some unrelated routines and jokes are tweaked to make sense within the album’s concept. But in its entirety, Krock90q.Buzz demonstrates Vatterott’s ability to achieve his incredible ambition.

This limit-pushing creativity is not without drawbacks, particularly in standard comedy venues. Some were resistant to Vatterott’s use of a jarring lighting effect for a bit. “I’ve gotten club owners who’ve just yelled at me for it and gotten mad about it,” Vatterott says. And even in the more receptive “alt” venues he prefers, Vatterott has to arrive extra early to make sure all the technical aspects are in order.

Fortunately, Vatterott’s upcoming Ready Room appearance will be presented by the kindred spirits of Bare Knuckle Comedy, a ten-year-old sketch and standup showcase that is using his performance as its final show. Vatterott credits Bare Knuckle with “helping to make a cool scene in St. Louis” in the years since he left, through its showmanship and cultivation of a local DIY aesthetic.

It’s a compliment that speaks to what Vatterott values most in comedy, and what he wants to accomplish.

“It’s impossible to be the funniest comedian,” he says, “but I would still love to try to bring something to the table that isn’t already out there.”