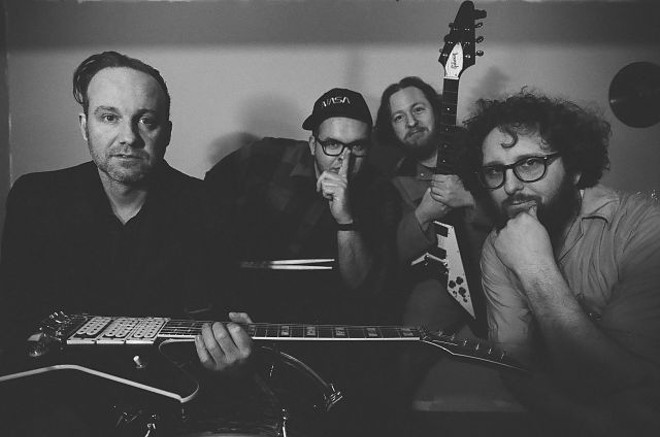 Asumaya
8 p.m. Friday, June 28. Foam, 3359 South Jefferson Avenue. $7. 314-772-2100.
Not to harsh Keller Williams’ mellow, but pretty much anyone can set loops on their guitar; today’s rapidly expanding guitar-pedal technology means that even the most novice of shredders can pick one up and noodle away. Madison, Wisconsin-based artist Luke Bassuener, who records as Asumaya, prefers to make loops out of his mbira, an instrument popularized by Zimbabwean musicians (it’s close in construction to a kalimba). Asumaya gets a wide range of tones from his little thumb-piano, from marimba-like bass notes to the flurry of metallic blinks that he sets against an overdriven bass guitar and emphatic vocals.
Loop-de-Loop: Any touring loop-centric artist will have to contend with our very own queen of the form, Syrhea Conaway, who will perform a set alongside fellow St. Louisan Eric Hall. Local electronic wranglers Stephen Favazza and JoAnn McNeil will also perform.
—Christian Schaeffer

Dylan LeBlanc
8 p.m. Friday, June 28. The Old Rock House, 1200 South 7th Street. All ages: $12 advance, $15 day of show. 314-588-0505.
One thing’s for sure, Dylan LeBlanc knows how to write a rock & roll line. “Police car radio howling out an APB,” he sings on title track to the newly released Renegade. “Some bad motherfucker, and they say he looks a lot like me.” The stance he cuts is pre-Army Elvis bent with post-motorcycle-wreck Dylan, and the sound he conjures, ethereal and threatening at once, like Laurel Canyon smoldering on the cusp of fire season, has become his own. His rich tenor could sail above the turbulent guitars and layer upon layer of backing vocals, but he’s letting the music drive his finely crafted lyrics, even if he can’t say where. Rock & roll outlaws always strike a pose, but LeBlanc’s new stance has the wide-ranging ring of truth.
Catch His Drift: Andrew Ryan’s 2017 release Across Currents remains one of the strongest St. Louis-based singer-songwriter albums of the decade. Arrive early and dive into his opening set.
—Roy Kasten

St. Louis Punk Rock Flea Market
11 a.m. Saturday, June 29. The Silver Ballroom, 4701 Morganford Road. Free. 314-832-9223.
Punk’s not dead, it’s just all grown up and interested in bargain shopping now. That’s the only sensible takeaway from the existence of the St. Louis Punk Rock Flea Market, held from 11 a.m. to 10 p.m. this Saturday in the parking lot across from the Silver Ballroom. With more than 40 vendors selling records, collectibles, punk gear and handcrafted goods, you’re sure to walk away with that rare album you’ve been searching for, or maybe a studded vest with which to broadcast your continued disdain for society. Drinks from 4 Hands Brewing, Alpha Brewing, Stag, Jameson and Brick River Cider will be served, and some eleven bands will perform, including Trauma Harness, Bassamp & Dano, Bastard Squad and Boomtown United. Admission is free, but obviously you’ll want to bring some scratch for the treasure on hand.
Declassified Records: St. Louis conspiracy-punk band Maximum Effort will be using its slot at 4:30 p.m. to host a listening party for its latest, a double LP to be released July 6 at the Sinkhole. This show should serve as a nice primer.
—Daniel Hill