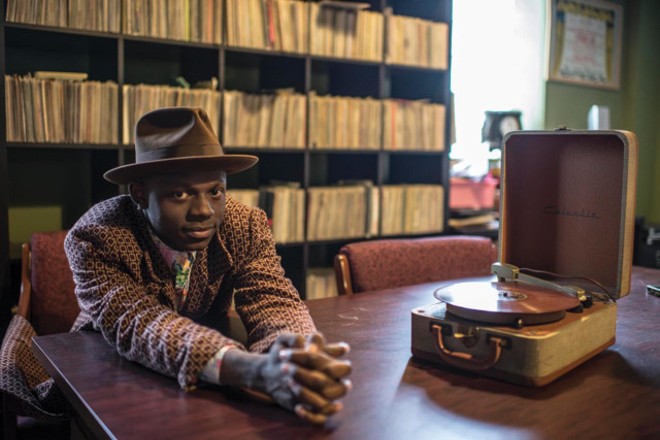 Trombone Shorty & Orleans Avenue
8 p.m. Friday, June 7. The Pageant, 6161 Delmar Boulevard. $30 to $40. 314-726-6161.
Troy Andrews, better known as Trombone Shorty, plays the horn as if he was born with one in his hand. And frankly, that was nearly the case. The musical prodigy and multi-instrumentalist started performing when his age was still in the single digits, sharing a stage at the New Orleans Jazz & Heritage Festival with the legendary Bo Diddley at four years old and becoming the bandleader of a brass band parade when he was only six. The grandson of celebrated New Orleans blues singer-songwriter Jessie Hill, Andrews has carved out an impressive career since his pre-k days, working with Lenny Kravitz, Charles Neville, U2, Eric Clapton, the Foo Fighters and countless more. His work with his own band, Orleans Avenue, is high energy, filled with the funkified spirit his hometown is known for, and sure to get asses shaking at the Pageant.
Party Like It’s 2014: Though he’s been back to town since (to Ballpark Village, meh), Andrews’ performance at 2014’s iteration of LouFest was a memorably good time. Here’s hoping he and his band bring that same energy back around on this trip.
—Daniel Hill

J.S. Ondara
8 p.m. Monday, June 10. The Old Rock House, 1200 South Seventh Street. $10 to $12. 314-588-0505.
At 26, J.S. Ondara has lived the kind of American life that even Ira Glass or James Baldwin could not have scripted. Born in Nairobi, Ondara immigrated to Minneapolis six years ago (the weather took some getting used to). His American journey has been fueled by Bob Dylan and Van Morrison records, tempered by the madness of the Trump era, buoyed by political resistance and illuminated by his gift for collecting and telling stories. On this year’s extraordinary debut album Tales of America, Ondara makes no apology for his pre-electric Dylan and Guthrie influences. His voice, however, is a force of unique nature: piercing, searing, supple and full of wonder. His art is the definition of the American vernacular and the American promise.
Powered by Pop: Opener Adam Melchor may not wish to be compared to Lennon and/or McCartney, but with melodies as dreamy and bold as his, he better get used to it.
—Roy Kasten

Vampire Weekend
8 p.m. Wednesday, June 12. Fox Theatre, 527 North Grand Avenue. $35 to $92.50. 314-534-1111.
If Vampire Weekend has clogged your pop-culture media feed over the last month, you can blame it on the principle of feast or famine: After a five-year hiatus, the band recently unleashed Father of the Bride. Fans are likely still digesting the two-disc set, which features guest spots from Danielle Haim, Steve Lacy and a few other West Coast luminaries, but Ezra Koenig has reasserted his command over pantheistic pop music. The breadth of the album gives the singer/songwriter more room to stretch out — from the conversational country-weeper opening track to the loose, slightly jammy vibes of lead singles “This Life” and “Harmony Hall.” VW’s original quartet has grown since its debut but its scope is now seeking to better fulfill Koenig and company’s breadth.
Freedom Fighters: Eternally charming Los Angeles quartet Chicano Batman opens the show with a mix of psych, soul and garage rock last heard on its 2017 album Freedom Is Free.
—Christian Schaeffer