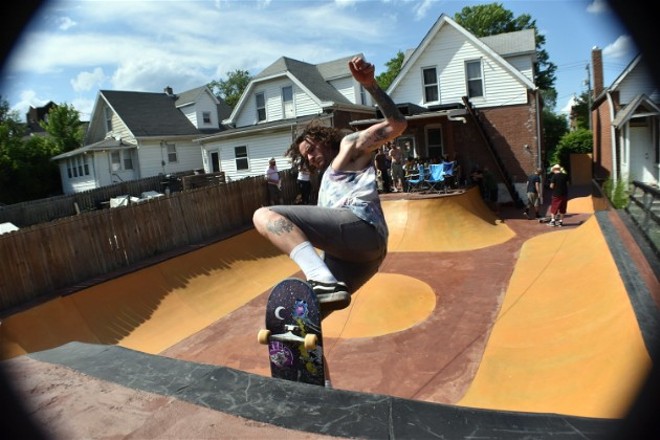 The next time you're sweating in the sun, cursing nature itself as you push a mower around your lawn in the sweltering summer heat, spare some ire for the third president of these United States, one Thomas Jefferson.

It was that horticulture-loving son of a bitch who is credited with bringing the European concept of close-cut, well-maintained grass to this once-wild country, way back in 1806. The idea soon spread, and now we have him to thank for the tedious and never-ending yard work routines we're all forced to undergo every damn week. Just try conscientiously objecting; in most American municipalities, city inspectors will soon be dropping by.

But one St. Louis genius finally has that bastard Jefferson outsmarted, with a brilliant solution to the lawn care problem: Pave over all of that shit with a bitchin' skate park, and never mow again.

Jonathan Getzschman, better known in St. Louis music circles as Frozen Food Section rapper J-Toth from Hoth, recently completed work on a jaw-dropping arrangement of sculpted concrete covering every inch of his backyard. With the help of Always Hard Concrete and Construction, operated by Bryan Bedwell — a founding member of KHVT, the local nonprofit responsible for multiple skate parks in the St. Louis area — Getzschman has fully realized the dream of skaters and lazy homeowners alike with a completely skateable park right behind his south city domicile.

"We all worked together; we all put our collective efforts in to buy the cement," Getzschman explains. "Basically we made a $150,000 park out of $15,000. Just us working our asses off. We put in for the cement all together and then we did it all together. So now we have a meeting place."

Getzschman and Bedwell have known each other for years through skateboarding, and they did the work on off days and weekends over the course of six months. Bedwell's crew of four took the lead on the labor, with about 100 man hours put in by each one.

They'd also grab volunteers to help out from time to time; pitching in came with the promise of perks.

"In skateboarding, if you help out, you get access later on," Bedwell explains. "'Come and swing a shovel for a little while and you get to skate this shit.'"

Perhaps most surprising, the city of St. Louis even issued a permit for the construction. Getzschman says it took three months to get the OK from inspectors. At first, he called his plan a "sewer drainage system" — skateboarding has some unfair connotations, and he was worried the project wouldn't be approved. But the city got wise.

"They were like, 'This looks like a weird drainage system,'" Getzschman says. "So finally they put 'plans for private skate park.' They made me. They were like, 'Are you gonna skate on this?' I'm like, 'Yeah.'"

As it turns out, his concern was for naught. As Bedwell tells it, the people currently working in the city's building department are interested in new and cool things. "That's part of being a forward-thinking city," he says. All it took to get full approval was for the neighbors adjacent to Getzschman's home to sign off.

That, too, proved easier than imagined: One house is a rental property filled with young people who are stoked at the prospect of living next door to a skate park; the other is occupied by an architect who was fascinated by the project, and often sat outside and drank beers while he watched them work. With their approval, the park got the green light. 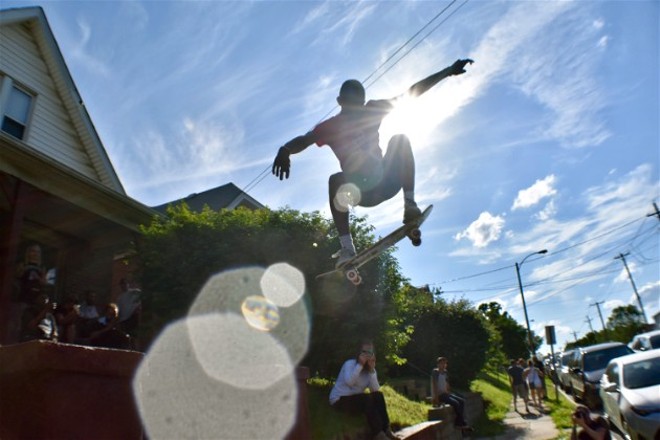 "The city planner rides by every day on his bike, seeing our progress," Getzschman says. "Brags to all of his department people like, 'Yeah, I approved that.' So it's kinda cool to have them on our side. They really just want St. Louis to look better and I'm pretty OCD, if you can't tell. Make it look really pretty and everybody's happy."

The full plans for the house, which is not Getzschman's primary living quarters, involves a recording studio for the Frozen Food Section collective as well as an Airbnb-style concept exclusively for professional skateboarders.

The ambitious project was born largely out of Getzschman's recent foray into sobriety.

"I've been sober for over a year now," Getzschman explains. "This all happens when I'm sober. I go crazy, I just get shit done."

Dubbing the house, appropriately, "the Cooler," Getzschman refers to his plans to let pro skateboarders from across the country stay at the property as "Cooler Bnb," with the "-er" pronounced like "air." He's even already recorded a theme song and album of the same name to advertise the spot, with a forthcoming video to match.

"And then we're gonna blast it out to the country, to skaters," Getzschman says. "Thrasher Magazine, Skateboard Magazine. I haven't talked to them yet; I've been waiting to get it all done. Really just advertising the St. Louis skate scene. Like, 'Come hang with us, we're lonely. You guys are having so much fun on the coasts.'"

One place the house will not be advertised is Airbnb itself. Getzschman is firm about keeping the location of his skate paradise under wraps as far as the public at large is concerned, and wouldn't even let us mention the neighborhood it's located in for this story.

"The most important thing about this would be keeping this location a secret," he explains. "Skateboarders will be all over here if the address gets out."

In other words, if you're interested in pushing wood around a grass-free backyard skate utopia, you're gonna have to build your own. Maybe give Always Hard a ring. After all, far worse things could happen to this city than a rise in backyard skate parks and a decline in yard work.

In your face, Thomas Jefferson.