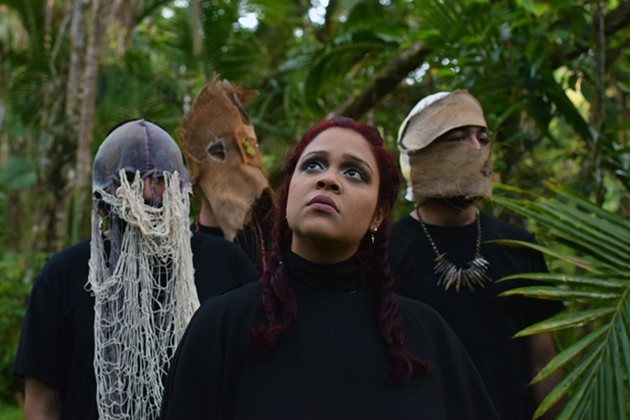 Tacocat
8 p.m. Friday, May 24. Off Broadway, 3509 Lemp Avenue. $12. 314-773-3363.
Moving from Sub Pop’s farm-team label, Hardly Art, to the imprint’s main roster may seem like a little too much inside baseball, but Tacocat’s ascension to perhaps the most storied indie label speaks to how well the indie-pop quartet has mastered its multi-pronged approach. On its just-released LP This Mess Is a Place, Emily Nokes’ malleable voice sounds great on both the rangey, reverberant opener “Hologram” and the glammy stomp of “Grain of Salt.” The quartet grew out of a love for a previous generation of riot grrl records, and Tacocat’s message of self-actualization — “Don’t forget to remember who the fuck you are,” Nokes implores — mixes well with its smart and syrupy pop jams.
Arrive On Time: Sammi Lanzetta opens the show with punkish, quick-hit energy and dreamy, languid reveries.
—Christian Schaeffer

Combo Chimbita
8 p.m. Tuesday, May 28. Off Broadway, 3509 Lemp Avenue. $10 to $12. 314-773-3363.
Were the author of One Hundred Years of Solitude still alive to opine on the matter, he just might deem Combo Chimbita the most magically real of all bands. Alchemizing all manner of traditional Latin and Afro-Carribean music — cumbia, champeta, calypso and trippy dub — the New York City-based group wails, fuzzes and grooves into an Afrofuturism that even Garcia Márquez could not have imagined. On this year’s bracing Ahomale (Yoruba for “adorer of ancestors”), Combo Chimbita immerses listeners in a trance that’s as spiritually supple as it is playfully psychedelic, led by the keening vocals of singer and percussionist Carolina Oliveros and rhythms that slow burn, surge and jubilate like a dozen saint-day festivals in the barrio.
Indie Cred (Not That It Matters): For its second album, Combo Chimbita enlisted producer Daniel Schlett, who has worked with the War on Drugs and Modest Mouse. The results are even more hypnotic than you’d expect.
—Roy Kasten

The Damned
8 p.m. Wednesday May 29. Delmar Hall, 6133 Delmar Boulevard. $25 to $28. 314-726-6161.
In a pretty great get for the talent-buying team at Delmar Hall, the Damned will be hitting St. Louis on its short run of U.S. dates pinned to the Punk Rock Bowling fest in Las Vegas and Camp Anarchy in Thornville, Ohio. Better still, the legendary British punk band will be performing its 1979 masterpiece Machine Gun Etiquette in its entirety, in celebration of the album’s 40th birthday. A departure from the band’s earlier work, Etiquette incorporated garage-rock, pop and psychedelic influences — along with early flashes of the gothic style the band would experiment with in later releases — with the punk rock for which it was already known. The end result is rightly hailed as a classic, and Delmar Hall will be a hell of a cool place to see it performed live.
Enter the Snake Pit: Garage-rock act Detroit Cobras, hailing from — well, you can probably figure it out — will open the show.
—Daniel Hill