Tool Would Be a Better Band Without Maynard James Keenan 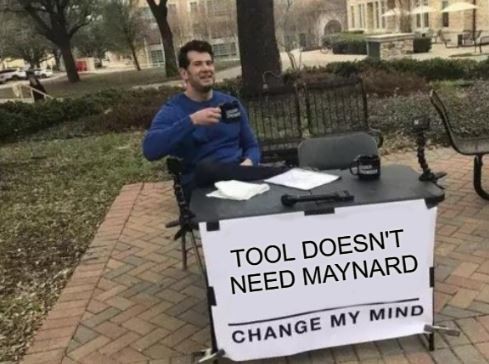 Somebody has to say it: Maynard James Keenan is a completely unnecessary member of Tool.

The internet rejoiced earlier this year when everyone's favorite pseudo-intellectual band announced it was going to tour again. Bros of a certain age flipped their shit and started saving up to buy (very expensive) tickets to the shows. They just love them some Tool.

And there is a lot to love about Tool, too. The band has been making great music since the 90s, mixing up a powerful combination of prog, psychedelic and industrial rock to create its own genre. Its members’ musicianship is indisputably some of the best in the business. Adam Jones’ guitar style is legendary, Justin Chancellor’s bass work is enchanting and Danny Carey remains a monster behind the drums and an unmatched titan in his field.

But then there’s James Herbert Keenan a.k.a. “Maynard.”

As the lead singer and lyricist, Maynard is the reluctant face of the band. And because the image of the group rests on his tiny shoulders, the entire band is often perceived as a joke, when it should really be seen as three professional-ass musicians and one embarrassing dork.

Maynard takes a world-class band and does his best to ruin it at every turn. Even when he's performing he ignores the audience and hides at the back of the stage in a Starbucks Stormtrooper costume or in a glued-on rainbow mohawk and clown makeup.

Proof of his ineptitude is in his other bands. Nobody really likes A Perfect Circle. That group was a disappointment from top to bottom. And Puscifer? Come the fuck on. It's almost like Maynard and Morrissey are in a secret competition to see who can bring more shame to their fans.

Need more proof? The issues with Maynard range from bad to worse. First of all, he likes to hang out with Guy Fieri. And few years ago he called his fans “retards.” And then there were those heavy (but unproven) #MeToo accusations.

Tool fans not only have to deal with Maynard's insufferable public persona, they also have to realize that he’s completely checked out of the band. Homie moved on about two decades ago. He’s run a successful wine company for the past fifteen years and his involvement with the band and the music industry in general seems minimal at best. Dude just wants to make Jesus Juice in the desert, not engage with his stupid white trash fans.

And then there’s the obvious fact that listeners dare not speak: Maynard can’t hit the notes anymore, anyway. Sorry. The truth hurts.

His vocals and lyrics might have been useful back in the day, but at this point Maynard is the Bernie Sanders of rock: You want to thank him for his past contributions, but send him on his way.

Without his interference, Tool could be a much more prolific, respected band. Free from Maynard, Tool has the potential be the best instrumental band ever. With him out of the way, the band would just be three seriously talented musicians at the height of their game performing intense songs with crazy time signatures and genius-level instrumentation. And everyone would love it.

It’s time we all face facts: Free Maynard. Save Tool. It’s the best option for everybody.

Tool plays the Enterprise Center (1401 Clark Avenue; 314-622-5400) in St. Louis tonight. There are still many tickets available because they are hella overpriced.