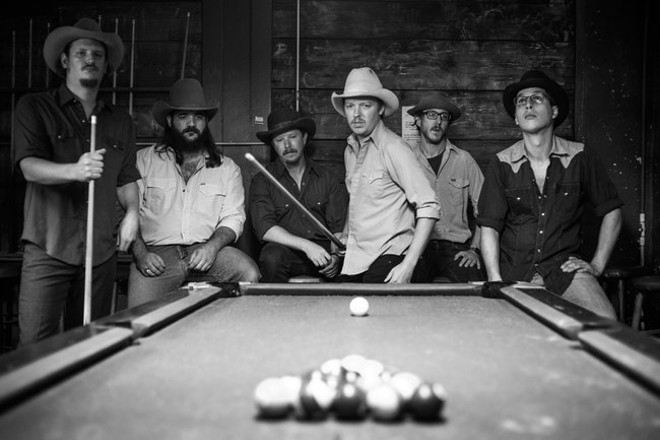 Cher
8 p.m. Friday, May 10. Enterprise Center, 1401 Clark Street. $35 to $196. 314-241-1888.
We’ve become such a spoiler-averse populace that revealing the ending to pop-culture lodestones (like the final Avengers film, say, or some big Game of Thrones reveal) warrants a hasty tribunal and ritual beheading. So take this as a warning if you’re planning on attending Cher’s upcoming show, but we have it on pretty good authority — a grainy smartphone video taken at a recent New York show — that the singer recreates the spirit of the “If I Could Turn Back Time” video by donning the same fishnets-and-leather combo of yore. The “Here We Go Again” tour is heavy on ABBA hits, befitting her appearance in the recent Mama Mia! sequel, but expect to enjoy the songs (and outfits) that made her an icon.
Good Times? GREAT Times! Cher may be an icon, but let it be known that Nile Rodgers — that’s Nile Goddamn Rodgers of Chic and countless production credits, mind you — opens the show.
—Christian Schaeffer

DJ Paul
6:30 p.m., Tuesday, May 14. Pop's Nightclub, 401 Monsanto Avenue, Sauget, Illinois. $30 to $75. 618-274-6720.
Three 6 Mafia rapper DJ Paul has had a pretty interesting career since his band went on hiatus in 2013. The deaths of compatriots Lord Infamous and Koopsta Knicca stymied efforts at a related effort dubbed Da Mafia 6ix, but that group’s embrace of Three 6 Mafia’s horrorcore roots brought Paul and Co. to the attention of the juggalo community. Nowadays you’re just as likely to see wicked clowns swinging hatchets and singing along to the likes of "Sippin' on Some Syrup," "Poppin' My Collar" and "Stay Fly" as anything the Insane Clown Posse has ever released. That explains how the DJ and rapper ended up on the lineup of this determinedly juggaloian affair alongside the likes of ICP, Rittz, Mushroomhead, Ouija Macc and Kissing Candice. Just don’t expect him to don any face paint.
Put Some Spice On It: Be sure to head to the merch booth at the show and pick yourself up some of DJ Paul’s “On Errthang” All-Purpose Seasoning. Tastes great on eggs!
—Daniel Hill

Mike and the Moonpies
8 p.m. Wednesday, May 15. Off Broadway, 3509 Lemp Avenue. $10 to $13. 314-773-3363.
If you’re gonna start a bar band, you might as well go all in. Mike Harmeier, leader of Mike and the Moonpies, set out to play hard-rocking honky tonk with the aplomb of gnarled journeymen who could care less if they ever make it out of the buckets of blood alive. “1-2-3 Bam Bam” goes the count off to this year’s swinging Steak Night at the Prairie Rose, the Austin, Texas, band’s most polished and thoroughly enjoyable release. These shitkickers can play, with Telecaster and pedal-steel duels that give no quarter and some of the hottest piano riffs this side of Jerry Lee Lewis. Surprisingly, the band and the songwriting shine on the ballads, including the warm and wistful title track, which could be a George Strait hit if Strait could still get a hit. Neo-traditional country rarely burns this sweetly.
Dancers Welcome: Buff up your boots and get ready to practice your two-step moves when the Moonpies roll into town. The dance floor will be open.
—Roy Kasten