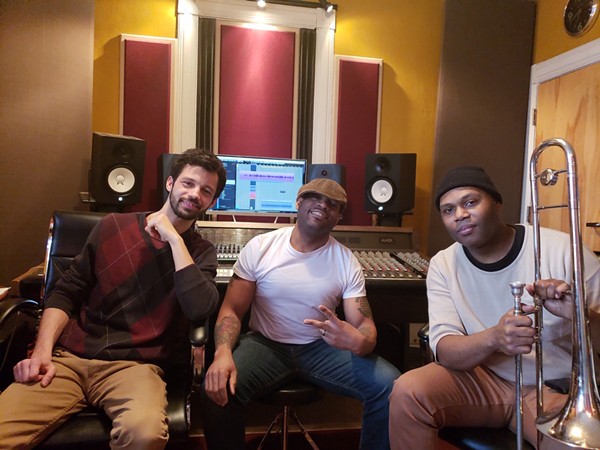 Andrew Stephen, 32, sits inside of Eightfold Studios, a tidy, everything-in-its-place facility located inside the converted attic of his Dogtown home. For the past several years, it is here that the keyboardist has produced, recorded and written alongside a host of St. Louis musicians. One such artist, Grover Stewart, 39, is warming up on the house drum kit in a neighboring room, preparing to lay down tracks for the pair’s second collaboration, a song co-written by Justin Barksdale called “I Can’t Wait for Your Love.”

This Sunday afternoon session will also include a round of vocal takes by Stewart — a relatively new development for a man who has made his bones as a drummer around town, one capable of playing every style of music. He's spent time gigging with a range of groups including Hip Grease, the Service, Brothers Lazaroff, Superhero Killer and multiple projects with Mo Egeston and Lamar Harris.

The fact that he plays in so many groups on a regular basis, in fact, is a large part of why he and Stephen have been moving at a relaxed pace on the songs that Stewart had initially envisioned as his first solo album. Instead of putting them out in a batch, the pair are following Stephen’s recent path of releasing one song at a time, with an accompanying video, every so often. It’s an approach that Stephen says fits into a recent trend he's noticed: People are releasing smaller snippets of music.

“You’re seeing it in something like Netflix,” Stephen says, “which has more of the subscription model. It provides you ongoing content to entertainment artists that you like. Why can’t music do something of the same thing?”

With his own work, dubbed Sample Kulture, Stephen has been releasing collab- and cover-heavy material every two or three months, each time presented under the umbrella of an album series.

"It’s a great opportunity to master the craft of continuous content," he says. "It’ll keep people engaged and give us a continuous relationship” to an audience.

Earlier this year, in fact, RFT’s Christian Schaeffer took note of Stephen’s take on the yacht rock favorite “Summer Breeze,” recorded to feature the vocals of his personal and frequent musical partner Chrissy Renick. It’s that song that helped cement the emerging relationship with Stewart. The latter, who’d been looking for a songwriting/production partner for several years, had already been tipped to Stephen’s work by his frequent rhythm section partner, Theodore “Teddy” Brookins, who insisted that the pair would be a perfect fit.

Once that personal recommendation was matched to Stewart’s love of the “Summer Breeze” project, interest was more than piqued.

“I stalked him," Stewart laughs. "We actually played one gig together, with the Brothers Lazaroff. We were going through a transition in keyboard players and Nate Carpenter was deciding if he’d stay or go. Andrew came in and I thought, ‘Yeah, he can throw down.’ But I play so many freakin’ gigs that I don’t even really remember that one. To make a long story short, I’d been searching for this, yearning for this connection."

Stewart already had material, he says, and had been looking for a producer for a long time.

"When I’d find somebody, something would always fall through," he explains. "It’s always about time and season. And it just wasn’t ready yet. When I asked Teddy if he knew anyone who’d done house production, he said, ‘Dude, you need to talk to Andrew.’ Seeing ‘Summer Breeze,’ I had a conniption fit. This is exactly what I’d wanted to do.”

The project, as noted, wouldn’t only feature Stewart as a drummer. His vocals are going to be prominent on the material, and he says things have been going well on that front. The pair recently completed their first song together, called “I’ve Grown.” Aside from the two songwriters, the only person to have contributed to the cut was horn player Lamar Harris, who added trombone and flugelhorn.

When they cued up the basic tracks for Harris and noted that it was Stewart singing, Harris’ reaction was a mix of surprise and pleasure.

“The reaction to my vocals has been really healthy so far," Stewart says. “The process has been absolutely phenomenal; it was meant to happen. Every session has allowed me to grow and mature and allow me to look at these different places in myself. ‘Are you ready to sing this? Yeah you are.’ You find individuals that help you strengthen your skills. I think I have a decent voice, but can I push it? He’ll let me know that I can push, can reach for that note. All that’s really helping my creativity.”

"I get a lot of people through here who say, ‘Oh, I’m a closet singer, let’s make a record,’" Stephen adds. "Some of them make you grin, some not so much. That’s when you’re busting out the Autotune, beknownst or unbeknownst to them. But if Grover wanted to, he could have a singing career. It’s as if, had he spent all of his time on voice instead of the drums, he’d definitely be known as a vocalist. He’s been around music his whole life and has a great voice for this type of music.”

Which, as Stewart describes it, is “good, old-fashioned dance music.” With an ability to run wild in the studio, Stephen says that “I’ve Grown” features somewhere around 90 tracks. "There’s a lot of ear candy there,” he notes. The song has been mastered with Brad Sarno, and the next step is a video release with Stephen behind the lens. Both audio and video forms are set to be released within April.

In the meantime, Stewart’s still going to be working a day job as an HR manager while seeking to finish up his college degree in the same discipline. As always, he’ll be found around town behind the kit, performing with a slew of local acts. And every so often, on a bright and sunny Sunday afternoon, he’ll tuck away inside of Eightfold, bringing another aspect of himself to life.

“I’m following in this guy’s footsteps,” he says, slapping Stephen’s shoulder. “At first, the excitement was about doing an album, but seeing what he’s been doing has allowed me to get excited about releasing this house music, with audio and video, one idea at a time. I’m getting well educated in the process; he’s got a lot of knowledge, man. It’s been a very humbling experience.”