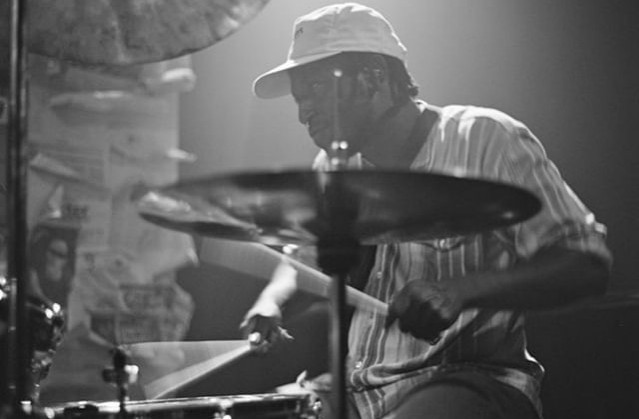 The Dhoruba Collective
7:30 p.m. Thursday, March 21. The Dark Room, 3610 Grandel Square. Free.
314-776-9550.
It is no longer a secret that St. Louis is in the midst of a jazz renaissance. That’s shown not only in the number and quality of local performers but in the uptick in solid local venues. The Dark Room, located in the foyer of Grand Center’s Grandel Theater, has become a nexus for established and up-and-coming jazz artists to ply their craft — recent weeks have featured sets by Tonina, Kasimu Taylor and Owen Ragland (all of whom are represented on the Kranzberg Arts Foundation-produced The Sound of St. Louis — Jazz Compilation Volume 1). Local drummer Dhoruba Shakur takes over the spot with his collective this Thursday night; he’s been featured on recent releases by Jesse Gannon and Andrew Stephen, and his intensely energetic and pinpoint-precise playing will provide the backbone for his headlining spot.
Rainchecks Available: The Dark Room offers live music seven days a week alongside food and cocktails, so if this Thursday doesn’t work for you, check the venue’s schedule at thedarkroomstl.com and pop in soon.
—Christian Schaeffer

The Legends of Hip-Hop Tour
8 p.m. Saturday, March 23. Chaifetz Arena, 1 South Compton Avenue. $55 to $128. 314-977-5000.
As the years have gone on and ’90s kids have advanced into their forties, there’s been a dramatic upsurge in the number of arena tours populated by old-school hip-hop bands, though the quality and caliber of artists on deck varies greatly. Some strive solely to satiate the nostalgic hunger of the masses — MC Hammer’s House Party, we’re looking squarely in your direction (seriously, Tag Team?) — while others package older titans of the craft into a must-see night. The Legends of Hip-Hop Tour provides the latter. Featuring Cash Money rapper Juvenile, Houston rapper and King of the South Scarface, Memphis duo and Three 6 Mafia associates 8Ball & MJG, West Coast legends Too Short and DJ Quik, and Houston MC and UGK member Bun B, this show is wall-to-wall packed with classic artists for real hip-hop fans.
But Respect to the Monsta Mack: OK, we’ll probably be at MC Hammer’s thing too, if only for Sir Mix-A-Lot. Posse up!
—Daniel Hill

Robert Ellis
8 p.m. Sunday, March 24. Off Broadway, 3509 Lemp Ave. $14 to $17. 314-773-3363.
A singer-songwriter who changes instruments doesn’t exactly make for a white-hot, burning lede, but in the case of Robert Ellis, it’s the key to his most recent story. The Houston, Texas, musician has never been content to follow in the footsteps of the Lonestar School of pickers and shitkickers. His sound has a rich, often hyper-layered texture that suits his supple, falsetto-friendly voice. It’s not quite yacht-Americana but it’s not quite not. The recently released Texas Piano Man comes as advertised, and it’s the kind of record he sounds born to have made. His chops at the keys are solid, and his melodies and rhythms are set free, like Tumbleweed Connection channeled through his own sardonic wordplay — song titles like “Passive Aggressive” and “Fucking Crazy” catch the drift — and spirited, pop-friendly tunefulness. He’s come a hell of a long way, and the ride’s still worth it.
Deer Tick Picker: Guitarist for Rhode Island group Deer Tick, Ian O’Neill takes a break from the band as the must-see opener for this night.
—Roy Kasten


We’re keeping you informed…
...and it’s what we love to do. From local politics and culture to national news that hits close to home, Riverfront Times has been keeping St. Louis informed for years.