Garth Brooks Isn't Who You Think He Is (He's Even Better) 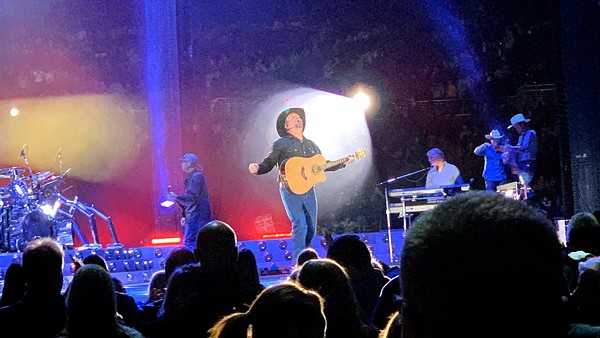 Garth Brooks is much more than he seems. He’s known to audiences around the world as the king of country music. Judging solely by albums sold, he’s the best-selling solo artist in the U.S., having moved more than 148 million albums in his career. Seven of his albums have achieved diamond status; just last week he set a record for vinyl sales, when his upcoming box set pre-sold 420,000 records in thirteen hours. And still, there's more.

Brooks’ impact on country music (and American music as a whole) cannot be overstated. He’s the original Taylor Swift — country did not cross over to pop until he built the bridge. Country used to be considered almost a fringe genre, but then Brooks came around and got city slickers dreaming of spurs, latigo and that damned old rodeo.

And he's a good guy, too. Brooks spends much of his life off-stage donating time and money to charities. He's even formed his own charities, including Teammates for Kids, which finances renovations at children's hospitals. He even once literally saved children from a burning building.

He's a gay rights activist, one who supported the LGBTQ community in concrete ways (including releasing the most woke-ass anthem ever, “We Shall Be Free”) long before it was cool. He was always down to show up for the cause, once doing a legendary duet with George Michael at a concert for gay rights. He also supports gun control, recording a Facebook video directed to Parkland student activist Emma Gonzalez. “Your generation is the generation for the school shootings," he said. "Let’s make sure the next generation is not.”

And he does it all as a flag-waving Christian from Nashville via Oklahoma.

All of this and more is part of what made Brooks’ Chris Gaines character so fascinating. In the late '90s, Brooks recorded an album of R&B songs under the name Chris Gaines. Brooks was the biggest country star on the planet (ever) so he couldn’t just go make non-country songs without some kind of backlash. The Gaines character gave him a way to make other types of music without having his name attached directly.

Brooks made Gaines an Australian with a complicated backstory and an intense wig. (The character was even going to star in a movie, although that never materialized.) Gaines was also subject of an entire (fake) episode of VH-1's Behind the Music.

The alter-ego was not only an outlet for Brooks’ overflowing talents, he was proof that we all can change, that we’re not actually stuck in the box that we’ve been assigned. We don’t have to be narrow-minded country boys because that’s what our neighbors are doing; we can be an Australian pop star who sings songs that sound like Babyface and who dresses like a Eurotrash magician. In short: We can be heroes.

And Brooks has a history of looking out for us here in St. Louis, too. Right after the second round of Ferguson protests, after a grand jury failed to indict Officer Darren Wilson, Brooks posted an update to Facebook saying he was canceling upcoming scheduled promotional appearances in New York because it would seem distasteful to him to go on.

He ended the note with “Love one another, g.”


Many of us St. Louisans were too distracted at the time to notice his display of respect, but Brooks made a point of talking about events here when he played St. Louis a month later. The city was emotionally raw — to say the least. From the stage, Brooks encouraged the audience to love each other before playing “People Loving People,” which includes the line: “People loving people / That’s the enemy of all that’s evil.”

Brooks brought up Ferguson again Friday afternoon at a press conference before his big show at the Dome at America’s Center on Saturday. He said his decision to kick off his five-date tour of massive stadiums in St. Louis came down to how much love the audience showed him the last time he played here, just after the protests. He spoke of the healing power of music and how he felt overwhelmed by the warmth he was shown here.

After being presented with an honorary name change of the Dome (“The Garth Brooks Dome”) and solemnly speaking on Ferguson, he turned back into a good-times entertainer again. He told tales of his family and appeared to choke up a bit about his departed mother. He was funny and lovable and exactly like the guy you see on the big stage except instead of wearing tight Wranglers he was sporting a Carhartt jacket and Nike (is that a statement?) construction boots. 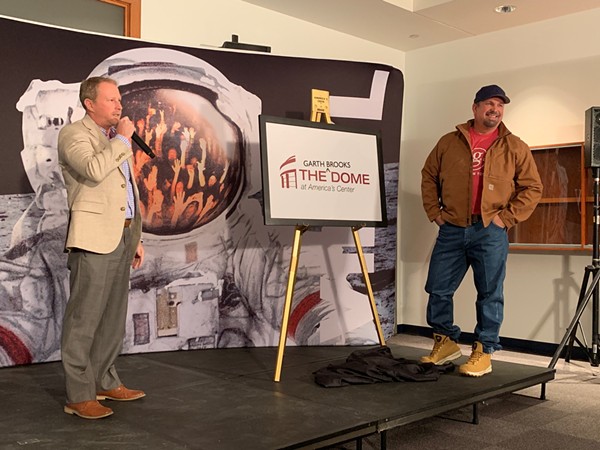 I got to do a quick interview with Brooks after he talked to the group, and I used the time to pass on a sincere "thank you" for the care and compassion he showed to St. Louis in the wake of the Ferguson riots… but I also just had to ask him about Chris Gaines. I am deeply (and weirdly?) obsessed with the time he spent as Gaines and I knew I’d never get another opportunity to ask him about it face-to-face.

After a long, rambling intro, I asked Brooks if he had any Gaines left in him. He didn’t miss a beat, but he did redirect the question a bit.

“When you go to concerts,” Brooks explained, “you know what you like, but more importantly, you know what you don’t like. So why are you putting anything on them that they don’t like? Do all the things that they like and then surprise them with stuff they didn’t even know they liked. They’ll tell you. If you’re watching, if you’re awake, they’ll tell you if they don’t like something and then —" he chuckled "you get that done quick!”

It was an artful dodge; I had been hoping for something a little more personal. But just as I was about to leave, Brooks slid up to me, leaned in close and with a twinkle in his eye said, “Thank you for the ask on Chris Gaines. It’s my wife’s favorite Garth Brooks record.”

We talked about it a bit and he said his favorite song on the Chris Gaines album is “Drifting Away.” And just like that, he gave me exactly what I was after — not a sound bite, not a quote that was useful to any other journalist, but just a bit of insight that I’d come there, selfishly, to find.

Garth Brooks never leaves a fan (or a journalist) unsatisfied.


He proved it the next night in concert. There is a certain buzz to any room with 75,000 people in it, but the vibe at the Dome on Saturday was positively electric. It was also slightly frazzled — there was gridlock traffic outside and entrances were overloaded, resulting in the entire show start time being delayed about an hour so the audience could get inside.

But once Brooks took the stage it was all big, big love. He appeared to get choked up a couple of times, and some members of the audience were sobbing on the Jumbotron.

As the first date of the tour, nobody in the audience knew what songs to expect in the setlist, but he played all of the hits and — true to what he’d told me the day before — surprised them with things that they couldn’t expect, like a performance of fan-favorite “Wolves.”

He jogged across the stage and beamed love and togetherness and acceptance into every corner of that room and his fans mirrored it right back. St. Louis is a deeply divided city that seems always on the verge of complete collapse, but strength and love and community holds us together and makes us strong. Garth Brooks knows this.

And when you’re at one of his shows, it feels like he’s trying to teach his fans this, too, in his own way. Thanks, Garth. We’d be glad to have you back anytime.