Even Without Mark Dew, the Hideaway Is Still a Haven for St. Louis Music Lovers 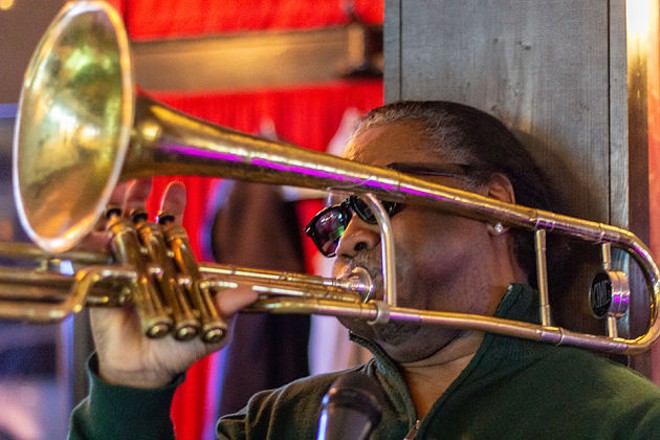 For what seemed like decades, the old-school, lighted sign outside of the Hideaway (5900 Arsenal Street, 314-645-8822) alternated between notices for “barmaids wanted” and reminders that Mark Dew was playing that night. The bar, established in 1954, has gone through a series of changes within the past few years, though the new ownership carried over many of the traditions of the old joint, including Dew and his work at the quirky, W-shaped piano bar.

Valerie Carroll is one of the new(ish) owners of the place, part of a five-person group of friends, including two couples, that acquired it in June 2016. As a bartender and operating manager, she’s the person you’ll see behind the bar on some nights, or hanging out at the bar for a good number of the other ones. She’s the person greeting customers by name, monitoring Jeopardy broadcasts and making sure that the dogs wandering through the space don’t quarrel.

When she and her crew took on the project of running the Hideaway, she had solid expectations from her experience bartending in south city for twelve years.

“I knew there was a list of things we had to keep,” Carroll explains. “The piano. The red walls. The paintings of the ladies. And because of the customers, the TJ’s Pizza had to stay.”

Note that piano music was first on that list of items. Veteran pianist Dew, she told the RFT at the time, could keep working there for as long as he wished. But health issues caused his appearances to decline. And in early 2018, Carroll says, he came in on an off day and simply packed up his remaining items, never to return.

After decades of performer and venue being basically intertwined, it was an abrupt (and unsatisfying) ending. The bar had planned a 32nd anniversary party for him this past fall, but it never materialized. Carroll acknowledges that she finds the situation all a bit unusual, though she realizes that Dew always marched to the beat of his own drum machine. (Dew did not respond to several email and phone messages from us, either.)

But the Hideaway wasn’t without options, and multiple musicians have found a home at the keys in the last year. Oliver Johnson, a holdover from the bar’s past, has become the most frequent. Having gigged at the bar for two decades, Johnson is no stranger to the room, as comfortable at the club as he could be.

Starting out a track with a drum machine, Johnson will effortlessly introduce the song with a few words, tickling the ivories and sliding from announcements and casual chit-chat into the song’s lyrics. At some point, there’s a good chance that he’ll pull a trumpet out from the recesses of the piano booth, simultaneously handling horn and keys. His performance style is smooth; there’s really no other word for it.

Carroll has seen versions of his performance dozens of times. His patter never ceases to amuse her.

“Oh, man, he’s hilarious,” Carroll says. “He’s soulful, funny, he works hard. He travels for music and has played with some big names. He’s definitely going to drop some names on you.”

And that Johnson does, noting his presence in this soul band or that blues group, dropping quick references to shows in Japan or across the country. These aren’t always told in a linear fashion, so putting together a list of dates and names can be a bit tricky, but we can say safely that he’s played a lot of gigs in a lot of places with a lot of people.

These days, there’s still some travel involved, though his bread-and-butter work comes from gigging around St. Louis. Those are a real wild mix, from bookings at Chimichanga’s on deep South Grand to Westwood and St. Albans country clubs to nursing homes.

People are people, though, and they want to hear the same music, no matter where they set their gin-and-tonics. In the days prior to Christmas, Johnson treated a growing Thursday night audience at the Hideaway to a burst of Christmas classics in his first set.

“Some people wait until deep into the season before they want to hear holiday music, but this is deep enough, so let’s bring it,” he told the crowd. “You want to touch people and these songs have touched me real good. It’s pretty neat to hear people to be singing along to Christmas music.”

“Sometimes when people come to the bar you don’t know what their situation was before they came in,” he reasons. When they request songs, “I’ve got a policy to talk to them, even when I’m off the clock, or if they’re really demanding. I’ll always try to do that song. Because you don’t know what it might mean to them.”

Once, a group came in and a woman mentioned that her mother had been diagnosed with a serious ailment.

“She didn’t know how long she had to live,” Johnson says. “The lady asked me to play a couple of songs and I dedicated those to her mother. The same lady came in during the next week or two, and said, ‘Thank you,’ and gave me a very nice tip. She mentioned that her mother had really enjoyed herself and though she didn’t know how long she’d have, she’d enjoyed that night and I’d entertained her. That really made me feel good about what I do.”

And he likes doing what he does at the Hideaway.

“These club owners have done a good job of preserving the original Hideaway while upgrading it and making it something new,” he says. “It’s one of those places where you never know who’s going to walk through the door.”