LouFest Vendor Sabotaged Festival to Set Up His Own Event, Lawsuit Alleges 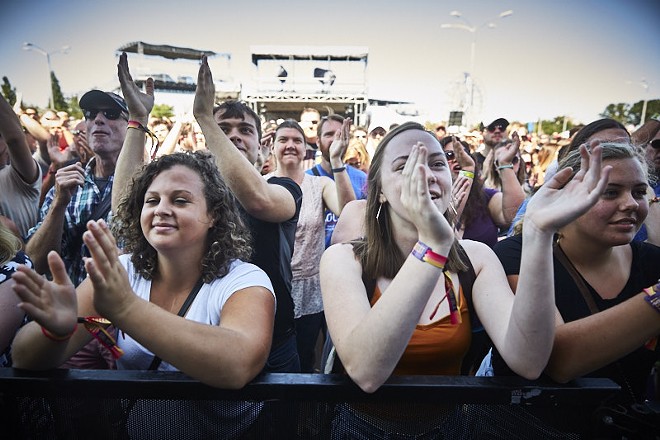 Last August, St. Louis Public Radio published a bombshell report: The backers of LouFest were having trouble paying their vendors. Chip Self of Logic Systems, which had been hired to provide sound and lighting for the music festival in Forest Park, told the station that his company was pulling out. "We're not doing it," he said. "They failed to fulfill their contract with us."

Six days later, LouFest was canceled, citing in part the bad publicity set off by that report. And it's what happened later that day that's now Exhibit A in a new lawsuit by the festival's promoters: Chip Self apparently contacted the city to see if he could get a permit to hold a music festival of his own in Forest Park in 2019 — on the same dates that had historically been LouFest's.

In a lawsuit filed last Friday in St. Louis City Circuit Court, Listen Live Entertainment and LouFest LLC are now suing Self and Logic Systems, alleging tortious interference — and suggesting that, without the bad publicity he set off, LouFest would have survived.

The lawsuit blames Self not just for his statements to the public radio station, but also accuses him of directly contacting talent agencies to stir up trouble for the festival as early as August 21.

At the time, the suit says, the festival wasn't late on any payments — because none of the deposits were due as of that date. But by suggesting otherwise, the lawsuit alleges, the lighting vendor set off demands for payment akin to a line of dominos.

Self, the suit says, "made negative, misleading comments about Plaintiffs, exaggerated statements regarding LouFest funding issues, and suggested LouFest would be cancelled, all in a strategic effort to cause artists to withdraw from LouFest 2018 and/or alter the terms of their contracts to accelerate payments in full in advance of their respective performances."

The representations made by Self weren't just false, the lawsuit says — they were made with "actual malice" in "a scheme to disparage" LouFest's promoters to its sponsors, vendors and talent agencies.

"Defendants engaged in improper means designed to prevent Plaintiffs from proceeding with LouFest in 2018 and subsequent years so that Defendants could usurp the business opportunity to provide a music festival in Forest Park for the City of St. Louis," the suit charges.

Reached this afternoon, Self said he'd have no comment beyond a brief statement. "This is a frivolous, defensive legal tactic that we expected, and we will defend against it vigorously."

As proof of its claims, the LouFest team notes in the lawsuit that Self approached the Kranzberg Art Foundation on August 31 — the very day St. Louis Public Radio aired its first piece quoting the lighting vendor about problems with LouFest.

The LouFest team had been working with the deep-pocketed local foundation to get a line of credit. But Self met with a representative of the foundation and asked that his company "be brought in as equity owners of LouFest," per the lawsuit.

The St. Louis Public Radio story that set off rounds of bad publicity for the festival quoted three vendors, not just Self. But the lawsuit notes a curious detail: The other two vendors operated out of the same Valley Park address as Self's Logic Systems.

And, the suit says, while Self told St. Louis Public Radio he was pulling out (an assertion that became the story's headline), behind the scenes the situation was more complicated.

On August 22, the suit says, Self threatened to halt work unless he was given some percentage of payment upfront. It was only then that the festival organizers signed an agreement saying they'd give him 50 percent of the total payment due by August 29. When they ended up missing that date, Self went public.

Even so, the suit says, Self took a harder line with the media than he did behind the scenes. According to the suit, "Chip Self advised [LouFest's Mike Van Hee] at that time that Logic Systems still had its gear and would work LouFest 2018 if Logic Systems received an advanced deposit by September 4, 2018. This statement was contrary to what Defendants had stated to the public in the media."

In a statement, Mike Van Hee, a partner in Listen Live Entertainment, said, "This litigation is just one step toward remedying the cancellation of last year’s festival and working to rebuild it for years to come. A variety of circumstances made LouFest 2018 impossible to carry out, and we’ll continue to shed public light on that larger story, as appropriate.

"We apologize for disappointing the city of St. Louis and its music fans, as well as the LouFest sponsors, partners, musicians and vendors who were financially impacted by the event’s cancellation. Our work hasn’t stopped since September, and we’re dedicated to restoring lost trust as part of our path forward.”

Self's Logic Systems filed suit against LouFest last November, saying he was out $55,082 and hadn't been paid a time on a contract worth twice that. To date, it's the only lawsuit that's been filed against the festival over its cancellation.

Editor's note: This story was updated at 1 p.m. to include a statement from Chip Self.