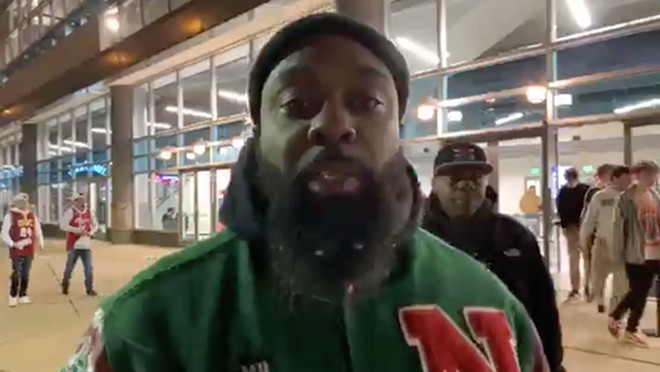 A small group gathered outside the St. Louis' Enterprise Center last night to protest a concert by Travis Scott. The Houston rapper recently performed for an audience of millions during the Super Bowl halftime show, but many people in St. Louis were not happy about his arrival here.

In a video captured by Real Stl News, the protesters let Travis Scott know that they didn’t appreciate him coming to St. Louis, citing his comments about Michael Brown after the Ferguson teen was shot by police in 2014.

In an interview with legendary New York radio station Hot 97 that same year, Scott seemed to blame Brown for the shooting. “I’m not saying he deserved to get killed, but I’m not saying that he didn’t deserve to pay for consequences he probably inflicted," the rapper said.

Scott then expressed his views on “the problem with black people," stating, “You gotta just stop putting yourself in positions where you’re continuously having this situation go down.”

Scott's loyalty to the black community was brought into question more recently when he agreed to perform at Super Bowl LIII this year. The gig had reportedly already been turned down by prominent black artists such as Cardi B, Jay Z and Rihanna, who were reportedly angered by the NFL’s treatment of Colin Kaepernick after he took a knee during the national anthem to bring attention to racial injustice in the United States.

Scott's performance at the Super Bowl brought his previous comments on Ferguson back into focus. His commentary was promptly ripped apart on social media.

In a reference to his relationship with Kylie Kardashian and the Kardashian family, he was called “a Kanye” — implying that he was a traitor to his fellow black men.

Mike Brown Sr. and the other protesters seemed to agree with this view.

“Y’all know the reason why we here,” Mike Brown Sr. told the crew from Real StL News. “We’re here for disrespect, man. Travis Scott disrespected an unarmed black man, my son. Which is our son, everybody in the community. For another black guy to talk bad about a situation that happened — from police brutality to murder — hey, somebody gotta do something. We out here trying to do something.”

Brown Sr. and a small crew stood out in the cold at the corner of Clark Avenue and South 14th Street to appeal to people getting ready to enter the stadium. Fans filing in seemed to mostly ignore or seem confused about the protest, with few stopping to talk to the group.

Still, the protesters chanted and they ranted and they let their presence be known. They also tried to speak individually to fans as they entered. One pair of black gentlemen stopped to hear their story and were visibly conflicted on whether to enter. The older of the two said their tickets were a birthday gift for the 15-year-old he had in tow.

The camera doesn’t show the eventual outcome, but it does catch Brown Sr. explaining that there “ain’t no brothers in there for real” and then pausing to wish the kid a happy birthday.

When a security guard gently asked the protesters to move off private property and onto the sidewalk, the group moved without issue, but continued its cold vigil.

There has been no mention of the controversy on any of Scott's social media accounts, but maybe he knew to keep quiet. After all, he already embarrassed himself a couple of nights ago when he thanked St. Louis while on stage in Kansas City.

The full video from Real Stl News is below.