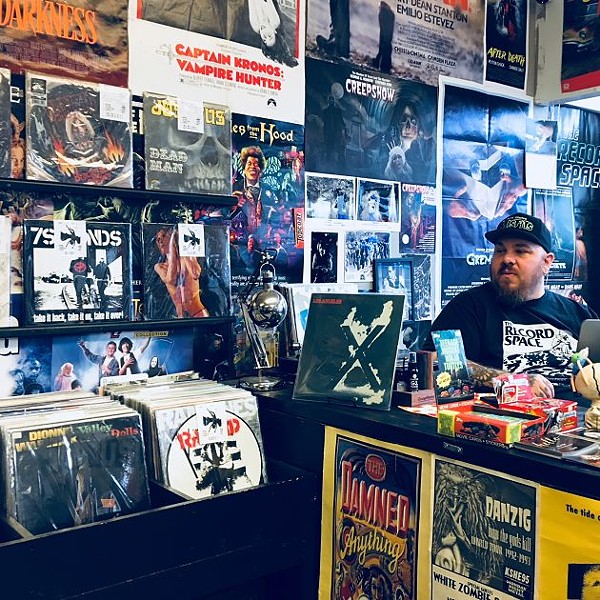 A fascinating graduate school paper could be written on the businesses of Gravois Road, that curving, swerving thoroughfare that slices from Soulard into southwest St. Louis County. And it never offers a more interesting mix of retail and services than in the couple miles it takes to drive from south St. Louis through Affton. There, Gravois has mega-pharmacies, Bosnian bakeries, a pool hall, HVAC repair shops, mole control specialists, barbers and delis, with graveyards liberally dotted into the landscape. It’s not a paradise, with dozens of empty storefronts, though in this part of town, they tend to come back to life with a wild mix of outcomes.

One example of a new business: In the middle of it all sits a good old-fashioned brick-and-mortar record shop, born in 2018.

Seven days a week, Donald Gene Brazel sits inside the business he debuted on December 15. For the past two months, he’s been slinging vinyl out of the Record Space (8716 Gravois Road, 314-437-2727), as well as cassettes, CDs, movies on all formats (with Betamax coming soon), as well as posters, toys and other collectibles.

Though he researched different neighborhoods and buildings, including a storefront that’s located almost directly across the street, he wound up settling the shop into a vacated storefront rooted in a stretch of businesses that include a hair salon, a law office, a Domino’s, and, because this is Gravois, a cemetery.

“Essentially, it was almost ready,” Brazel says of the two-room shop. “We built this sales counter, but everything else was already built into the place. We didn’t have to do a whole lot, oddly enough. It already looked like a record store.”

He’s completely right on that point. This is a classic record store, in a host of ways. The flooring doesn’t exactly match and there are some inconsistencies in the tin ceiling, but those minor matters only add to the store’s lived-in charm. Its two rooms are each lined with original theatrical and record-release posters. The larger retail space is in front, where you find most of the albums and videos in various formats, with multiple racks dedicated to a substantial horror section. The back room features toys and collectibles, as well as several of the shop’s eight arcade games, all of which are set to free play, no quarters required.

“We also sell gear and video game systems,” he adds. “Anything collectible. But the focus is on records.”

Brazel grew up in St. Louis, then spent twenty years living in Poplar Bluff. There, he peddled his wares at pop-up shops, antique malls and flea markets, though most of his business was done online.

“We had a booth, just to test the waters,” Brazel says of one flea market. “I’d been selling online for nineteen years, but they gave me an opportunity to set up in a room, with its own door, so it was our little shop. That’s where the name ‘the Record Space’ came from, since it was where the records were, compared to the rest of the space.”

But constantly moving all of his goods from place to place proved cumbersome. “You’d have everything set up: records, videos, games, toys, everything. It felt like we just keep building this shop up and tearing it down,” he explains. Soon he found himself dead-set on establishing a brick-and-mortar location. The storefront on Gravois was the first space he visited, and everything moved quickly from there. “It all happened within two or three months,” he says.

Brazel figures that any record store needs to establish an identity. His collection is not the biggest in town, nor does he ever expect (or even want) it to be, but he figures he can serve some niche markets.

From his station behind the counter, he points to his right. There, his punk albums and horror collection are found, the most popular sections of the store for sales and browsing. He has plenty of other rock & roll, but punk and horror (across soundtracks, movies and posters) are the bedrock portions of his collecting, curating and sales. All-purpose record stores “already exist,” Brazel says. “You definitely have to stand out, make your own mark. For me, this is doing what feels natural, and the punk rock and horror things are what it’s all about here.”

Brazel is in a punk band, Bastard Squad, with Jon Coriell, owner of Cherokee Street’s San Loo. He views that bar and music club as a sort of sister business, allowing the Record Space to sponsor events off-site while also bringing in cross-promoted, locally themed events. On May 30, for example, Bastard Squad will be sharing a stage with T.S.O.L. at Fubar. To extend the fun, Brazel’s hosting a meet-and-greet at the Record Space with limited edition posters for sale. Tying in local artists, consignment sellers and graphic artists is part of the plan as well. The store’s Devilnaught mascot and most of the shop’s flyers were done by Steve Banes (a.k.a. Punky of Voice of God and Sons of Black Mass). The store’s horror section was recently the apt location of an album release by the St. Louis band Horror Section. And locally created puzzles, zines and albums are found all through the shop.

When Brazel signed the lease, he asked his uncle, who owns Bayless Key & Lock, to change out the locks. As it turns out, 40 years ago, his uncle ran his lock shop in the very same storefront. Two generations of St. Louisans, both looking to Gravois to launch their businesses.

“The only thing I’d say about the business is that you have to love what you do, as corny as that sounds,” Brazel says. “I’m open seven days a week, 11 to 8. I’m here every single day. I would say that doing something like this puts stress on everything else going on in your life. You have to really want to do it, or be rich and able to hire people.

“At the end of the day, it’s just me,” he continues. “I’m not trying to do an idea of what people might want. I’m from the world of punk rock. You do what you want, and if other people want it too, that’s fine.” 