The Pink Slip Will Reopen, Grandson of Founder Vows 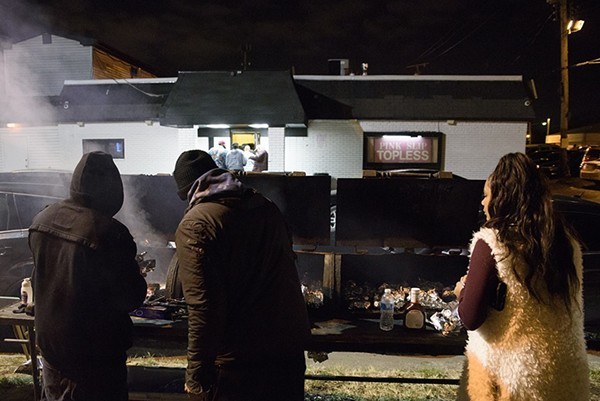 The Brooklyn-based strip club unceremoniously closed its doors last September. But Lennil Johnson, a grandson of its original founder, says he plans to reopen it this June after winning a fight in probate court. He says he plans to run it differently than his predecessor, vowing to “remodel and modernize” the popular club.

In its new incarnation, though, the Pink Slip will still remain the Pink Slip that St. Louis drinkers have come to love. Of his plans, Johnson says, “Rappers and naked bitches. That’s it.”

Johnson, who has most recently served as the club’s bookkeeper, says one of his main goals is to improve its safety. In 2012, a Pink Slip security guard shot and killed a man in line after a fight broke out. In 2015, a man was killed inside the club. “I want to make people feel safe,” Johnson said. “I don’t want no guns, no bullshit.”

Johnson has ambitious goals for his new business plan as well. He wants to bring in music stars like R. Kelly, Boosie Badazz, Young Jeezy, and TI to perform. He even claims to be in contact with a few of them. He also says he wants to add more attractions inside of the club — possibly inserting a hookah bar, barber shop, gift shop, and food court — while also bringing back private booths and laser lights.

The club has been in Johnson’s family for his entire life. His grandfather, Madison Garrett Sr., founded the Pink Slip in 1993 and ran it before passing away in 2003. Johnson credits Garrett for its success in the late 1990s and early 2000s, calling it the first all black strip club in America. “Not in St. Louis,” he clarifies. “In America.” In those days, he claims, the family was bringing in over $1 million in revenue.

Garrett Sr., however, died without a will, creating some tension within the family. Madison County records show that his estate ended up in probate court last November, with Johnson’s mother and Madison Garrett Jr., who served as the previous manager, both making claims. (Garrett Jr. did not return a call seeking comment.) Johnson says the case’s resolution has cleared the way for his management going forward, saying, “I’m operating the Pink Slip strip club until death calls my name.”

Johnson hopes to restore some of the energy surrounding the Pink Slip after what he feels like were unproductive years under his uncle. “We have to upgrade Brooklyn entertainment and that’s where my focus is... My goal is for Brooklyn to flourish again,” Johnson says. He adds that he specifically wants to help Brooklyn receive “adequate street lights and affordable housing.”

Brooklyn, a city of just 700 residents, had been a hotbed for nightlife and strip clubs, but in recent years, the scene has diminished. Roxy’s Strip Club announced its closing December 4. Another club, P.T.'s Brooklyn, rebranded as Black Magic, only to close last year as well.

These closures don’t worry Johnson. He is confident that the updated safety precautions and attractions will bring people to the club. “I don’t give a damn if [other businesses] are around,” he says. “We started alone.”