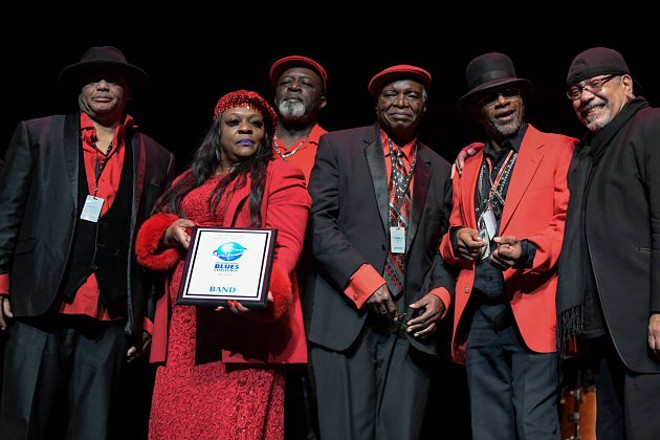 "Just believe," she says. "You can do whatever you set yourself out to do, but you've got to believe in yourself."

It's advice she heard frequently from her grandmother, and in recent weeks it has served the 50-year-old (born Jacinta Branch-Griffin) quite well. On January 26, she and her Fresh Start band took home the top honors in the 35th annual International Blues Challenge in Memphis. The win saw her beating out more than 200 fellow competitors from across the world and securing a prize that includes $3,000 in cash, recording time at Showplace Studios in New Jersey and slots at several blues festivals all over the country — even one on a Caribbean cruise.

St. Louis' Board of Aldermen recognized the magnitude of her victory on Friday. "To say that this is a big deal for St. Louis is an understatement," its resolution reads. "While we are so often overlooked as a player on the international stage, this success puts us squarely on the map."

All told, it's been a whirlwind for the woman at the center.

"When I entered it I really didn't think it was a big deal," Branch-Griffin laughs. "And then when I won I was like, 'Well, I guess this really is a big deal!' It's sinking in now, it's sinking in."

Her journey to victory started in the fall. A lifelong St. Louisan who got her start as a child singing in a church choir and later branched out to blues music, Branch-Griffin caught wind of the International Blues Challenge and decided she wanted to enter. She reached out to the St. Louis Blues Society to see what she needed to do.

Jeremy Segel-Moss, chairman of the St. Louis society, explains that the Memphis-based Blues Foundation is something of an umbrella society for blues organizations worldwide. Affiliate organizations like his host local competitions, with the winner going on to Memphis.

In October, Hy-C and her crew claimed victory at the Kirkwood Station Brewing Company. But with Memphis in her sights, Branch-Griffin was faced with another obstacle: The blues society said she needed more original music in her repertoire. Her only recorded song at the time was a reimagining of a Bobby Bland track she'd titled "My Love Is Not for Sale."

"My girlfriend said, 'Girl, you better go upstairs and write something real quick,'" Branch-Griffin explains. "I said, 'What I'm gonna write about?' She said, 'I don't know, but you gonna figure it out.'"

She did — and quickly. "What I'm gonna write about? Oh, I am going to Memphis," she recalls thinking. "OK, Memphis here I come!" The resulting track, "Memphis, Here I Come," will appear on the St. Louis Blues Society's upcoming 18 in 18 compilation.


With original material secured, when it was time to actually head to Memphis, Branch-Griffin turned to her grandmother's advice — and again to that magic word — for the courage to push forward.

"My grandma — bless her heart, she just passed in October — she gave me this doll that has a chain around it that says 'Believe,'" Branch-Griffin explains. "She said, 'If you put your mind to it, and you claim it, you'll get it.' So before I left home and went to Memphis I put my hand on top of the doll. And I said, 'I'll be back with that trophy.'"

Her victory on January 26 was a first for St. Louis.

"We've actually had no one ever even go to the finals, and Hy-C just went straight to the front of the bus," says Segel-Moss. "It's kind of like winning the World Series of blues."

"I didn't find out until one in the morning that Saturday," Branch-Griffin says. "We all had a house together, all under one roof in Germantown. And I woke everybody up, I was like, 'We made it! We made it!'

"All down Beale Street, all I kept hearing was 'Hy-C! Hy-C!'" she adds. "I mean, they were everywhere. So for one minute I felt like Beyonce, OK?"

Alderwoman Cara Spencer, who introduced the resolution at the Board of Aldermen honoring the band, says the city should take a more active role in celebrating the cultural achievements of its citizens.

"We spend a lot of time down there fighting over policies, but this is something obviously that we can all get behind," Spencer says.

For Segel-Moss, the exposure for the city in general, and Hy-C & Fresh Start in particular, cannot be overstated.

"Every blues society that is engaged in this was checking all night that night to see who won," he says. "So basically every blues community in the world just heard St. Louis."

Branch-Williams plans to take a beat and let her newfound success sink in, and then she has some tough choices to make. She currently works a day job, but the spate of festival dates her band secured by winning the contest — not to mention the new offers now filling up her inbox — could make it difficult to keep. If she decides to hit the road full-time, she reasons, there's no going back.

But grandma prepared her for that long ago.

"When I started really getting into singing and I started doing the blues she said, 'Now you want to be a blues singer?' I said, 'Yeah.' I said, 'Grandma, you think I can do this?' She said, 'Do you believe?' I said, 'Yes, ma'am.'