Huht Comes Into Its Own With New Self-Titled EP Release 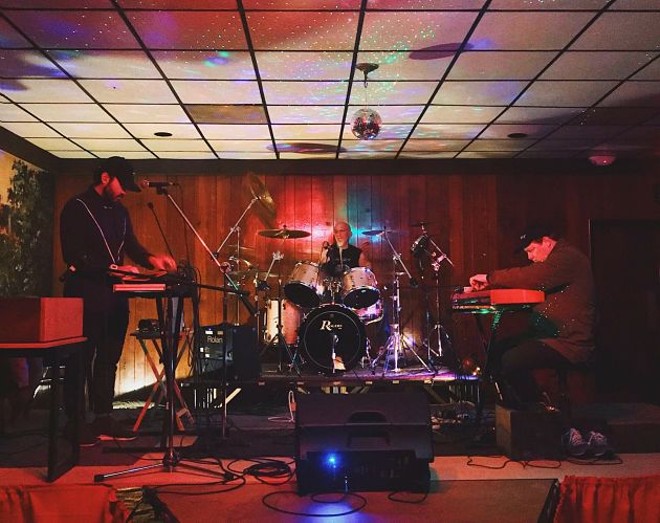 A year ago, Huht was so new to the St. Louis scene that it had only played a handful of gigs and its members weren’t even sure that their songs were, well, songs. At the time, they called them “song starters,” as the group was still in the phase of basic coalescence. Were they going to bring lyrics to some of these instrumentals? Were they going to aim for more of a jam direction, or would these “song starters” be set at a specific length? And would a sound as unique as theirs be able to find an audience?

Over the past twelve months they’ve found answers to most of those questions. The songs are now songs, outright, and are set in duration. They’ve added some lyrics, though the trio is still primarily an instrumental affair. The audience has come, via a wide range of independently oriented venues in town, with a growing fanbase along the way. And, as of this week, the band will finally have some music to share in the form of a five-song, self-titled digital EP.

One thing that hasn’t changed in the least, though, is the way the band’s fans tend to hear different things in its music.

“To me, what’s interesting about this music is that people will come up to me after we play and say, ‘It kinda reminded me of…’ And they always say a different band, something completely different from the last,” explains the group’s drummer, who goes simply by Q. “And I don’t even know a lot of the bands that they’re referencing.”

The group’s instrumentation gives a strong indication of its unique approach. Q may not be an octopus, but you’d swear a couple of additional hands must be at work to create all the rhythms he’s generating on his vintage Rogers kit. Facing one another are Todd Dillon on a Nord Electro II keyboard and Ian Quattrochi, who plays a Roland JD-Xi keyboard while adding some percussion on a tongue or split drum and handling the group’s minimal vocals. Both of the latter have been picking up the bass on occasion as well of late.

“We’re getting away from our classic two-synthesizers-and-drums feel,” adds Quattrochi. “We’ll come up with a different triangle of sound.”

The group’s EP will still feature that “classic” approach. And though the band is comfortable jamming with a host of talented friends, the recording does not incorporate any additional musicians.

“At our studio setup, where I live, we invite other musicians to come play with us,” Quattrochi says. “But nothing extra was used for this particular project.”

Instead, the band rolled into Native Sound Recording and wound up using a single, ten-hour session to knock out its five cuts. And a good chunk of that time was spent setting up drums and getting cables and cords into place. The release is not a fully live album, but one as close as possible to that, with the band’s five songs fit and in fighting form, none longer than five minutes.

“The way in which we make songs, the way we improvise, makes us think that we shouldn’t press a bunch of records,” Quattrochi says. “Then, three months later you have a whole new set of songs and think, ‘We could’ve waited.’ I think that’s where we’re at right now.”

The band’s release show will be at Tim’s Chrome Bar in the Bevo neighborhood. One gets the sense that the band was, in some respects, looking for the right reason to throw a show at this particular venue. For those unfamiliar, Tim’s features one of the longest bars in the city, behind which sit dozens of spirits that you won’t see anywhere else. The small stage juts from a wall near the front of the building, leading into a dance floor that can accommodate revelers. The decor’s been intact for years, and with the club’s naturally dark lighting, the scene tends to take on a movie-like vibe.

For years, Tim’s played host to small ensembles, three- and four-piece bands that cranked out the hits of yesteryear. Of late, a one-man band named Tommy Flynn has been holding down a regular weekend gig, with some karaoke tossed in. Hours have shrunk to just Friday and Saturday nights. It’s safe to say that a band like Huht hasn’t gigged there in a bit. Maybe ever.

On the night the deal was sealed, “they were watching professional wrestling in 1980s from the Tokyo Dome inside there, talking about the old days of the bar,” Dillon says. “We knew we had to do a show there. I’ve wanted to play there for a quite a while. This is the perfect excuse for us to make it something special.