Wild St. Louis Ladies Twerk on SUV's Roof as It Rolls Down the Highway 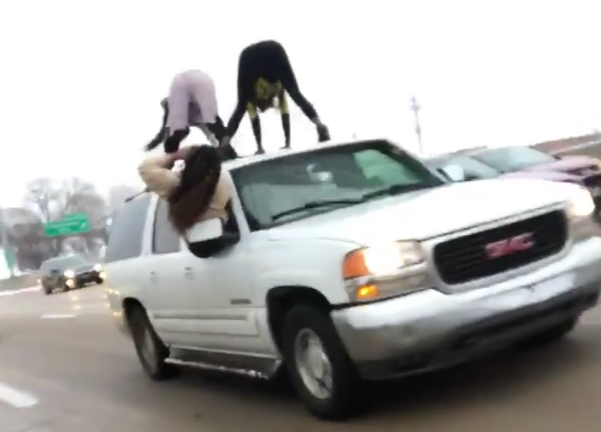 This past week has seen many St. Louis drivers exercising rare caution on the roadways after a massive weekend snowstorm resulted in nearly 900 car accidents across Missouri. But two women spotted twerking on the roof of an SUV as it traveled down the highway Monday apparently missed the memo.

A Washington University employee named Jackie Friedhoff is the source of a pair of now-viral videos that show two women bent over and shaking what their mommas gave them atop what looks to be a GMC Yukon. They're twerking even as the vehicle rolls down I-64, passing beneath the St. Louis Science Center's pedestrian bridge at Kingshighway.

A third person can be seen leaning out the passenger-side window, filming the spectacle. (If this is for a music video or something, please do send that our way ASAP.)

The women in the videos are not wearing what we would call proper twerking-on-a-moving-vehicle-in-January attire, with shirts baring their exposed midriffs. (Please note, the high temperatures yesterday were in the 30s.) At least neither of them fell onto the highway during the stunt like one of our other favorite local maniacs?

It all just goes to prove what we've long known: St. Louis is wild as fuck, through and through.

Watch the videos below: