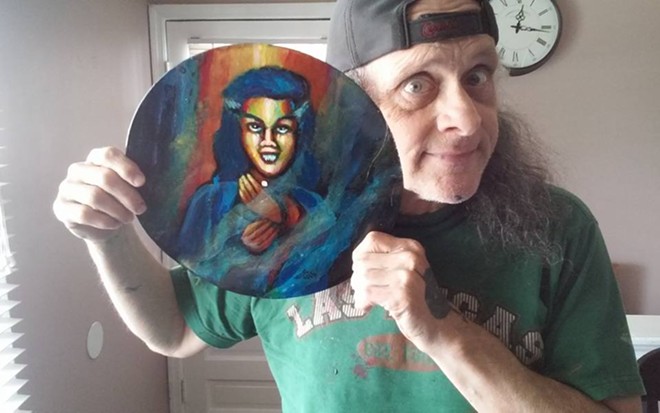 Wayne Ermatinger, known throughout most sectors of the cosmos as Wayne St. Wayne, passed away on Friday, January 11, after a lengthy battle against prostate cancer. Treatments of radiation and chemo proved unsuccessful in turning aside the effects of a disease he lived with for half a decade. With his death at age 64, he leaves behind a family that includes son David, 31, of St. Louis, and son Chris, 35, and daughter Shana, 33, both of Whitehorse, Yukon, along with two grandchildren.

All of St. Louis, meanwhile, lost a unique character who bridged multiple generations of bohemianism here. Both a self-taught artist and longtime professional wrestler, St. Wayne was a presence in South St. Louis barrooms, coffee shops and cafes over several decades — sometimes as an employee, more often in his self-appointed role as artist in residence. It’s a title he enjoyed at several spots, most notably Mangia Italiano, where his mural Mangia Evolutiano remains a years-in-progress work, showcasing his singular interpretation of history. At Mangia, patrons can observe his visions of history’s biggest moments, from the Big Bang to the teat-sucking Romulus and Remus to Cary Grant’s mad dash from a crop duster in North by Northwest.

His output at Mangia was symbolic, in many respects, of his general approach to art creation. He’d dab at a portion of the mural, often revisiting what an onlooker might see as a thoroughly finished panel, instead of pressing ahead on the mural’s completion (which he’d regularly suggest would be “this year, definitely, and if not this year, then next year, for sure”). Meanwhile, friends and onlookers would pause to chat on a regular basis, often taking out time for visits to nearby alleys for “inspiration walks” with his favorite forms of creativity-enhancing vegetation. Painting while sipping at both coffee and Stags, St. Wayne would frequently pause to work on commissioned pieces, simultaneously hawking works on his preferred canvasses of twelve-inch records and beer bottles.

St. Wayne speaks about his mural at Mangia in this 2013 video by filmmaker Susan Herzog: "I don't know anything about what's gonna happen after I die, so just in case I want to leave some great stuff behind."

For years, he lived near the Carpenter Branch Library on South Grand, and his familiar figure could be seen walking north and south between Mangia and the compact apartment he shared with his sons. His gait was affected by what amounted to an added body part: an old-school gym bag slung at the hip, loaded with bottles, paints, brushes, dog-eared folders teeming with newspaper clippings and, always, vintage, paint-splattered copies of Famous Monsters of Filmland magazine.

The visuals he created were dominated by the contents of that bag, with B-movie cinema at the heart of things. His paintings of old St. Louis often illustrated the dead movie houses of his youth, or the films that played on those screens, though they were far from his only muse. A first-time viewer might, for example, wonder why so many paintings were dedicated to the colorful pro-wrestling scene of the 1960s and 1970s, though a quick conversation with him would yield that information.

As a youngster, St. Wayne was entranced by KPLR's long-running Wrestling at the Chase, a show that inspired him to develop his body, to join the wrestling team at St. Mary’s and to eventually train as a pro. By the time he achieved some level of local fame as St. Wayne, his barnstorming days were well behind him, but photos of his younger self show a young man who was committed to his craft and body.

He developed a thick, muscular frame, his buzz-cut dome and broad chest propped atop tree-trunk thighs. Developing a kinship with Canada that would last a lifetime, St. Wayne would live and train in Edmonton, Alberta. That included time spent with the famed Hart family, and he eventually settled into a role as a “heel” (or villain) in many of his matches, though he’d also battle other heels or provide an amusing foil in tag-team matches.

Over time, with the Canadian promotion company Stampede Wrestling, he was known as Buddy Frankenstein, Mike/Michael Hammer, Mike Blood and, later, Doctor Blood. Moving back to St. Louis with that name, he took part in a lively period in local pro wrestling lore, battling at regional civic centers, ballrooms, high school gymnasiums and, most notably, the South Broadway Athletic Club. He was a fixture in a golden moment that included Big Daddy the King of Men, Ron Powers, Gary Jackson and the Giant Assassin, with their Saturday night exploits at the club in heavy rotation on Double Helix cablecasts.

Eventually, his body wore down from the years of intense mat work and multi-hour drives. That's when his presence as an on-location painter began to really blossom. Mangia was the perfect landing spot. This was the first generation version of that Italian-pasta-shop-turned-restaurant-and-bar, under the auspices of founder-owners Doc and Micci Parmely. They created something of the spiritual kin of Gaslight Square’s culture cafes there, with open-mic poetry, Budweisers and savory pasta salads mixing sensibly. With his daily presence, St. Wayne was as much of part of that environment as anyone.

In time, St. Wayne would be employed at other freewheeling spots, including a stint in the kitchen of the boho Cummel’s Cafe, along with a tenure as the backdoor bouncer of Creepy Crawl, where he came into contact with dozens of punk, ska and metal bands, some of which would wind up commissioning him for the covers of their records. These he’d execute with only a bit more speed than his usual it’s-done-when-it’s-done approach to timely assignments.

For a good chunk of the 1990s, he became a regular presence in local papers (including the RFT), in student and indie films, and on cable access shows like World Wide Magazine, all at a time when places like Mangia, Venice Cafe, Cummel’s, the Way Out Club, the Wabash Triangle Cafe and other locales were offering young St. Louisans a chance to grow into their own, new selves. He was something of a funny uncle for those of us in that community, cracking wise and offering up catch phrases such as his standard, lilting greeting, “So what’s new and exciting?”

After he moved closer to Kingshighway and Gravois, St. Wayne’s daily walks down South Grand became less frequent, and his illness eventually paused them entirely. But in recent years, St. Wayne was still spotted at Ert Nights, an art-making experience that took place at clubs like 2720 and the Art Bar, as well as the home of curators Jamie Jessop and Lana Camp. There, St. Wayne was among kindred spirits, working in their preferred media, alongside other free-spirited souls.

Realizing that all those south side sightings are over is a bit jarring; his presence is so ingrained in the visual geography of his old neighborhoods. But the magic dust he liberally scattered on his many long walks will remain on these streets for years to come.

A celebration of life for Wayne St. Wayne will be held at Mangia on Saturday, February 23 at 3 pm. For some added personal reflections, see the author’s homepage: thomascrone.com.