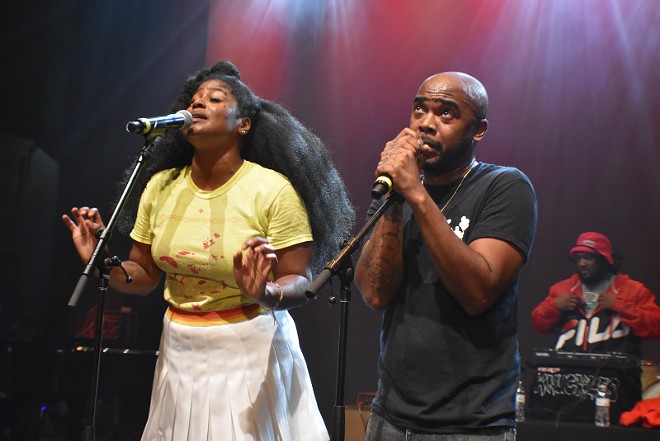 Drool w/ Sewingneedle, Little Big Bangs, Kids
8 p.m. CBGB, 3163 South Grand Boulevard. $5. No phone.
Chicago duo Drool dresses a loose-fitting sleeve of noise around a shapely set of punk played in slow motion. Circular riffs leak out from the guitar, feeding into a structure that sees each part degrade a little with each repetition. It’s like memory, which we now know works a lot like a game of telephone: Each time we recall events, we’re really calling back to the last time we remembered them. Drool’s subtle use of looping and octaves applies a similar feeling through quick songs that rarely pass the two-minute mark. DROOL II, a full-length follow-up to years of tapes and EPs, is set to release a mere week after this show, so expect new songs in the set.

Sad Cops w/ St. Villagers, John Hawkwood’s Blackfoot Sun
9 p.m. Schlafly Tap Room, 2100 Locust Street. Free. 314-241-2337.
Sad Cops crafts the kind of polished power-pop you might expect from a band whose members spent their formative years moonlighting in church bands. The band’s first EP was even made in the depths of a huge church in Coppell, Texas. A far cry from Christian rock, the group spends most of its time in Denton, a college town known for its solid DIY scene and exports of emo bands. And Sad Cops is no slouch in that scene, with a handful of solid EPs and one full-length under its collective belt.

Hit Like a Girl w/ Jupiter Styles, Carte De Visite, Flourescent
9 p.m. Foam Coffee & Beer, 3359 South Jefferson Avenue. $5. 314-772-2100.
You won’t be able to grab any Hit Like a Girl merch at this show, which is a shame, because that’s a great name to wear across your chest. Instead, the folk-rock outfit opts to sell goods from No More Dysphoria, a nonprofit that aids transgender individuals in transition. At the center of both the band and the organization is Nicolle Maroulis, a non-binary/queer artist based in Montclair, New Jersey. The band itself is an evolution of Maroulis’ humble start with little more than an acoustic guitar and a voice. Now Hit Like a Girl is run as a collective, with an amalgam of collaborators who rotate in and out to flesh out its lush, indie-leaning sound.

In the Mouth of Radness w/ Path of Might, Van Buren, Beyonder
8 p.m. The Sinkhole, 7423 South Broadway. $5. No phone.
What In the Mouth of Radness lacks in subtlety — that name! — is made up for by bliss-inducing bass riffs running roughshod over cannon-fire drumming. Singer and bassist Noah Koester pushes out lyrics in frantic bursts, as if he were coming up for air between what has to be a test of endurance on the four-string. Any track off the aptly titled Radsterpiece Theatre is proof-positive of the Iowa duo’s sugar-snorting brand of math metal. St. Louis has its own set of bass-and-drum shredders with Van Buren, which will lend local support hot off the heels of debut Flameless Forge.

S.L.U.M. Fest 2019 Hip-Hop Awards w/ the Knuckles, Bates, T Dubb O and many more
8 p.m. The Bootleg, 4140 Manchester Avenue. $5. 314-775-0775.
There are few entities as integral to St. Louis music as S.L.U.M. Fest, run by a collection of luminaries with their fingers on the pulse of local hip-hop. It’s no secret that winning an award through S.L.U.M. Fest really means something. Sure, it’s a stepping stone for a select few on their way to broader success, but these hip-hop awards exist primarily so fans can take a look back at the last twelve months while getting primed for the year to come. Whether you’re a lapsed fan or a diehard or you’re new to local hip-hop altogether, consider S.L.U.M. Fest a one-size-fits-all guide to regional rap that’s been proven year after year.