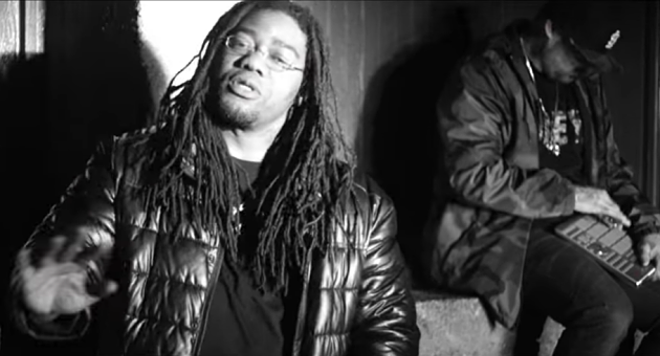 The up-and-coming St. Louis rapper, born Vincent Sanders, 35, was shot to death at approximately 3:30 p.m. Sunday in the 2600 block of Chippewa. The only reason he was at the scene at all, witnesses later said, was to defend two young women who were reportedly being harassed by a much older man.

That man, 42-year-old Christopher Rainey, has now been charged in Sanders' murder.

According to court documents, the altercation started when Rainey began arguing with two teenage girls outside of the Moto Mart located at the corner of Jefferson and Chippewa. Close friends of Sanders told KSDK in the days following the shooting that one of the girls was Sanders' niece. She apparently called him and told him that she was being bothered by an older man.

Sanders showed up at the scene to assist, witnesses told police. Sanders and Rainey then got into a physical confrontation, according to court documents. After Sanders punched Rainey, Rainey pulled a gun, firing two shots in the air. Sanders then began backing away from Rainey. That's when Rainey shot him in the chest, police say.

Sanders ran away from the threat, collapsing at the nearby Regions Bank branch before being transported to a hospital, where he was pronounced dead.

Rainey also fled the scene following the shooting, but was taken into custody on Monday. Police found the gun that was used to kill Sanders in Rainey's backpack. Rainey then admitted to the shooting, but claimed it was in self-defense, according to court documents.

Police say they have viewed footage from a nearby security camera that shows Sanders was backing away when he was shot.

Rainey was charged Tuesday with second-degree murder and armed criminal action. He is currently incarcerated at the St. Louis Justice Center, with a $500,000 cash-only bond.

Sanders leaves behind a sixteen-month-old son and a burgeoning rap career that even saw him teaming up recently with diamond-certified St. Louis super-producer Jay E, best known for his work with Nelly and the St. Lunatics, for Jay's July release Jay E Presents "In The City" Vol 1.

Fellow rappers and producers were quick to mourn Sanders' passing on social media.

"Just saw the worst news," writes Suburban Pro Studios owner Matt Sawicki. "Veeno Gunna we juuuuuust kicked it and were making plans. You were an amazing individual and will be greatly missed. This is awful."

"We deal with death constantly dog. But this one hurts in a wild way," writes rapper and former RFT contributor Tef Poe. "REST IN PEACE VEENO. Another one that just hit me in the stomach. We had a video shoot planned next week. We tried to shoot it this weekend but I wasn’t fully prepared. We were all just together at the studio on Thursday. There was plenty of life left in this man. I know for a fact he planned on living, we all had plans."

"I have an indescribable pain in my chest for my nigga Veeno, and I know if I'm this hurt I cant even fathom what Preach, Sketch and Veeno family feeling," writes rapper Bates. "I got my start from Veeno and all my gs and I'm for real broken by this. Lord help us."

"I love you brother. I'm in shock, I'm in pain," writes producer and frequent collaborator David "Sketch" Barnes. "We were doing so much, you were doing so well."

Rapper Preach (stylized P.R.E.A.C.H.), who was part of the group Rhyme Royals with Sanders, has launched a GoFundMe to help raise money for memorial services. That effort has already raised $2,456 of its $8,000 goal in just one day.

"Due to the tragic loss of our dear brother and friend, we have decided to band together to do our part in assisting in providing financially for his memorial services," Preach writes in the fundraiser's description. "Veeno was not only a talented artist, but also a wonderful friend who could light up a room with his smile, and could warm the coldest souls with his infectious personality."

A candlelight vigil will be held in Sanders' honor at 8 p.m. on Friday at McDonald Park (4200 Utah Street). Preach has also said he will be putting out Sanders' unreleased tracks to keep his memory alive.

Stream Sanders' collaboration with Jay E, featuring Preach and Fresco Kane, in the video below.