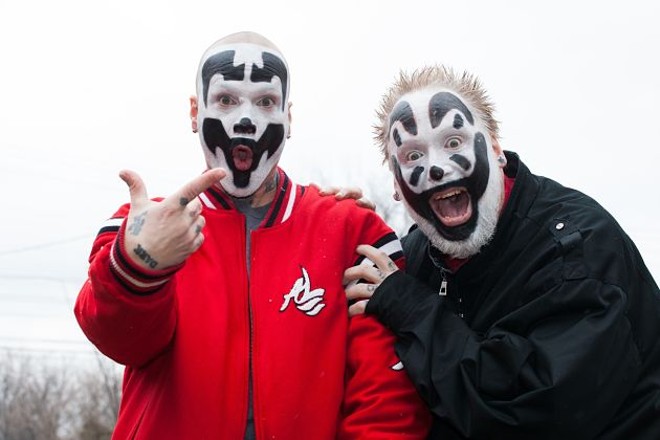 Violent J, one half of the Detroit horrorcore duo Insane Clown Posse, will not be performing at Blueberry Hill's Duck Room on January 30, as his entire solo tour has been canceled.

"Juggalos, we regret to inform you that due to circumstances that are out of our control, we cannot continue forward with the E&J tour," the post reads. "To all the venues, promoters and fans, we would like to apologize from the bottom of our hearts."

Fans of face-painted clowns and off-brand soda needn't fret, though, as this month offers a rare double dose of wicked clown rap for St. Louis fans. In fact, the other half of ICP, Shaggy 2 Dope, is slated to perform at the Duck Room this Friday, January 11. Tickets from the canceled Violent J show will be honored at the Shaggy show as well; conversely, refunds can be acquired at the point of purchase.

As it happens, Shaggy's show is one that we are highlighting for a Critic's Pick in our upcoming print edition. Here's that, for those who would prefer not to get their fingers all newsprinty:

As one half of the raucous Insane Clown Posse, rapper Shaggy 2 Dope is no stranger to controversy. Still, the most recent reason his name hit the headlines is one of the most ridiculous to date. Back in October, during a Limp Bizkit performance in New Jersey, Shaggy unexpectedly ran out onstage and performed a flying dropkick aimed right for Fred Durst’s head. ICP backers point out that it appeared to be a pro-wrestling style move that wouldn’t actually have hurt the singer, but nevertheless security snatched him from mid-air before he was able to make contact, dragging him away violently enough to make it clear they were not in on the joke. As it turns out, neither was Limp Bizkit, with the band’s DJ Lethal taking to social media in the days that followed to call Shaggy a "bitch ass clout chaser." Just when you thought the story couldn’t get any more absurd, no less than pro-wrestling madman/legend the Iron Sheik stepped in and brokered a truce between the two sides, dubbing Shaggy’s dropkick “fucking drizzling shits” even while calling him a “good man” and referring to Lethal as his brother. That seemed to be just preposterous enough to get Lethal to drop the beef, putting an end to one of the most ridiculous sagas of the whole ridiculous year.


No word on what the hell is going on at Blueberry Hill to make them crazy enough to book dual ICP shows in one month, but an unsubstantiated rumor that we've just now started suggests that owner Joe Edwards has traded in his formal shorts for giant pants and is now down with the clown until he's dead in the ground.