St. Louis Is the Best City for Nightlife in America, According to New Study

Would-be visitors to Las Vegas and its storied nightlife scene might as well cancel their plans now, because there's a new king in town, and his name is St. Louis.

That's according to Apartment Guide, anyway, which has just released a study this morning listing the top-ten nightlife cities in America — with the Gateway to the West coming in at first place.

Perhaps you've heard of Anheuser-Busch or Schlafly? St. Louis has a long history of suds, speakeasies and bootleggers. Today, you can grab a pint in Ball Park Village, catch a blues show in historic Soulard or simply raise a glass to America's best city for nightlife in any one of The Lou's beloved watering holes.


It is true that we drink, and drink heroically. But St. Louis is joined in the top slots by a few other cities less well-known for their propensity to party when the sun goes down (Cincinnati at number 2, Dayton at number 3) as well as some that are legend (New Orleans at number 7, we're looking at you).

Here are the top ten:

The reason for the unexpected inclusion of some of these cities comes down to the methodology of the study, which saw the website basing its rankings on how many nightlife options were available per resident while excluding cities with a population of less than 100,000. Using those metrics, St. Louis' abundance of bars, breweries, clubs and music venues, coupled with our smaller population, sees us leading the pack with one nightlife-related business for every 1,143 people. By contrast, the cities that you'd expect to see here — New York, Miami, etc. — were held back by their larger populations. 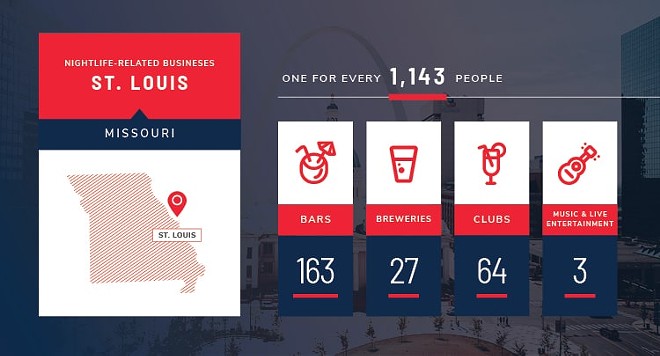 Curiously, even with its abundant nightlife options Las Vegas didn't crack the top ten, just barely missing out at number 11. (A listing of the top 50 cities can be found here.) In other words, roll out the welcome wagons for the country's hardest partiers, because St. Louis is the new place to be.

Nobody here can keep a secret for shit.