The 5 Best Concerts in St. Louis This Weekend, December 21 to 23 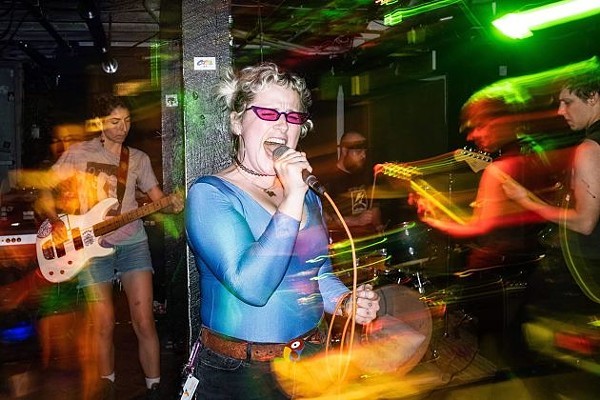 Kids w/ Dogtown Athletic Club, Dancer Prancer Vixen
9 p.m. El Lenador, 3124 Cherokee Street. $5. 314-875-9955.
Kids' clean punk is played in the key of twee, banking on crisp bass riffs and a straightforward approach to recording. The trio's debut EP 7 Nation Army — or the Spotify-exclusive, Jack White-friendly version 8 Nation Army — is pitch-perfect in its minimalism and sideways sense of humor. Singer Julio Prato reprises a sarcastic splicing of spoken-word and singing once heard in Kenshiro's (and more recently, nebulosa) while Ani Kramer chimes in with an airy and straight-forward style. It's a tidy kind of punk kept afloat by drummer Colin Ferguson's buoyant beats. Both Dogtown Athletic Club and Dancer Prancer Vixen join Kids for one of the only X-Mas-free parties this side of the busy and bloated holiday season.

Slay Belles 2018 w/ Mom, Shux, Newt Patrol
9 p.m. CBGB, 3163 South Grand Boulevard. $5. No phone.
While "female-fronted" is not a genre, there will be no shortage of shows featuring punk with the femmes up front. Named with a tongue placed firmly in cheek, Slay Belles aims to raise funds for NARAL Pro-Choice Missouri and the Gateway Women's Access Fund. Pop this is not, but the bands on hand all excel in rewriting whatever "punk" is supposed to mean. From Shux's wiry quirkiness heard in "Not a Not Nazi" to Mom's ground-pounding "im picky," there's enough to incite dancing or any other manner of primal body movement. Newt Patrol is maybe lesser-known for now, but its lightning-fast brand of punk is no less a hidden gem brought to you by members of Lumpy and the Dumpers and a long list of other south city bands.

Gaslight Christmas Sessions
7 p.m. Old Rock House, 1200 South Seventh Street. $10 to $13. 314-588-0505.
There's no avoiding it — give in to the drunk-on-eggnog warmth of Christmas. At least that's what ALT 104.9, St. Louis' fresh-faced alternative station, wants you to do. But wait, don't alt-rockers already have 105.7 the Point? Sure, but if this show is anything to go by, this newer station leans a little closer to local fare by sponsoring a lush and diverse selection of St. Louis artists. Gaslight, too, has been a steady purveyor of river city sounds, with a long list of live recordings that range anywhere from country and folk to free-jazz and experimental. Whether you're drinking the eggnog or you'd just as soon ignore the Santa-flavored fare, this show is a worthy primer on local songwriters in both 2018 and the year to come.

Spirit Of Christmas Rock & Roll Benefit Show
8 p.m. CBGB, 3163 South Grand Boulevard. $5. No phone.
The second in a duo of weekend benefit shows at South Grand's favorite dive, this "Spirit of Christmas Rock & Roll" does have its fair share of rock, but the sounds here are more subversive that you might think. Consider MotorJaxon and the MERCS the riff-heavy core of the show, with the R6 Implant as a bloody, axe-wielding outlier. With members from the brain-bending Yowie and Fragile Porcelain Mice, R6 Implant is hot off a long hiatus from shows that has been spent sculpting its angular math rock. Aiko Tsuchida is able to change the atmosphere of a room, bringing an ambient brand of sonic squalor to round out an event that benefits Places For People, whose mission is, in their own words, "to provide caring, effective services to help those with the greatest challenges recover from mental illness, substance use disorders and associated chronic illnesses."

Soufside Showcase w/ Rooster+Cras, Sloopy McCoy, MYCOL•VYNN, Jerei
9 p.m. Foam Coffee and Beer. 3359 South Jefferson Avenue. Free. 314-772-2100.
At one point, Barely Free Partial Prisoners was the glue between hip-hop, live poetry and noise in south city. Not that the crew died out, but its members went elsewhere, receding into different parts of the St. Louis music scene or, in lyricist Rooster's case, leaving the city altogether. Rooster relocated to Denver and joined the prismatic trip-hop crew of Utajahs. With any luck, he's picked up some detritus on the way back to St. Louis and is ready to share. Sloopy McCoy offers up a sharp and minimalist take on post-punk with little more than a bass, drum machine and a singular voice to back it all up.