The 5 Best Concerts in St. Louis This Weekend, December 14 to 16 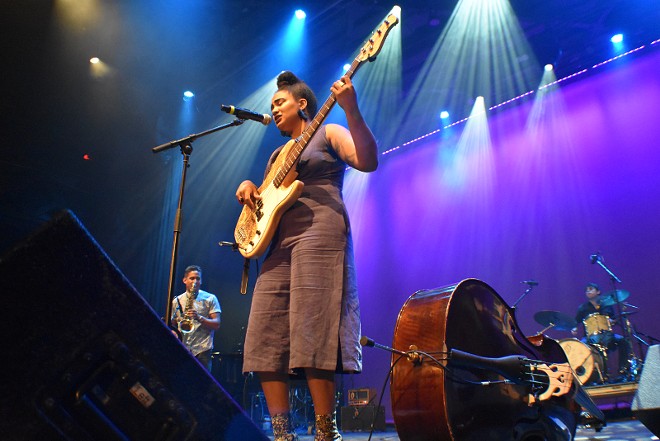 Heaven Honey w/ Nibiru, Camp Counselor, Nicole Grace
8:30 p.m. Foam Coffee and Beer, 3359 S Jefferson Avenue. $7. 314-772-2100.
Head Case, released this past March, is Heaven Honey's debut EP, containing a breezy four-song jaunt through rolling hills of alt-pop. Fuzzed-out chords move like a pendulum, buffing up the Bloomington band's shoegazey sound with a well-suited swing. Singer Jordan Gomes-Kuehner has a voice that swims over the contours of bright guitar chords, making for a sweet yet sinewy brand of songwriting. Sure, this could be called "indie," but that's merely a trailhead for the group's exploration of the genre, with winding paths and forks in the road. St. Louis' own Camp Counselor performs with a freshly formed backing band set to flesh out its brand of bedroom pop.

STL Women of Rock Showcase w/ Tiger Rider, Crystal Lady, Seashine
8 p.m. The Ready Room, 4195 Manchester Avenue. $10. 314-833-3929.
Three no-frills rock bands who bathe in the muddy waters of the Mississippi join forces to raise funds for the St. Louis Area Foodbank. The commonality here is "STL Women of Rock" and there's no question that between the three bands, there are several years’ worth of shows and studio records committed to history. The term "rock" is used loosely, as each group takes a distinctly different approach. Seashine's dreamy shoegaze mingles with Tiger Rider's glamorous garage punk, while Crystal Lady rounds out the night with a strong throwback to '90s-esque grunge. A veritable variety hour of power.

Van Buren Album Release Show w/ Alan Smithee, Slow Damage, Kilverez
7 p.m. The Firebird, 2706 Olive Street. $8 to $10. 314-535-0353.
Maybe it's the inanity of being landlocked in the Midwest, but the region has a knack for exporting warped brands of metal. Van Buren's doom is the audible sound of painting on black with even blacker paint, an exercise that won't do much but assure that the color you're looking at is indeed, without a shadow of a doubt, black. The sound this duo builds in the live space outdoes bands two or even three times its size, using little more than bass guitar and drums to build a strong sense of density. Unrelenting beats and proggy bass riffs are glued together by a gravelly voice that bellows above the noise.

Man the Manipulator w/ Bagheera, Buttercup
9 p.m. The Heavy Anchor, 5226 Gravois Avenue. $7. 314-352-5226.
Man the Manipulator tightly winds up its angular sounds with a chain-linked rhythm section that stutters with sharp precision. The vibe here hearkens to early excavations of hardcore, breaking apart straight-ahead structures with fractured riffing. The vocals could shatter glass — or really anything not made of solid steel — and are faithfully matched in both tone and tenor by the band behind them. Last month Man the Manipulator dropped its self-titled album, a seven-song airing of grievances with a darkly leaning sense of humor.

Stagfest II w/ Tonina, 18andCounting, Fond Han, The Donald Woodhard, Inc., Nick J Gusman, the Love and Drug Experience
6 p.m. Livery Company, 6728 South Broadway. Donations. 314-558-2330.
After the drunken marathon that was last December's Stagfest, the brains behind the event have once again bought together who they consider the best bands in town for a year-end blowout. This boozy bout features six acts that span a wide spectrum of sound, casting a wide net to raise funds for the American Civil Liberties Union. Tonina leads the pack with genre-splicing pop-rock that incorporates Latin and jazz-fusion while 18andCounting shifts tectonic plates underneath an unrelenting flow of hip-hop. The Livery should be tightly packed for this all-local musical family reunion, just in time for the holiday season.