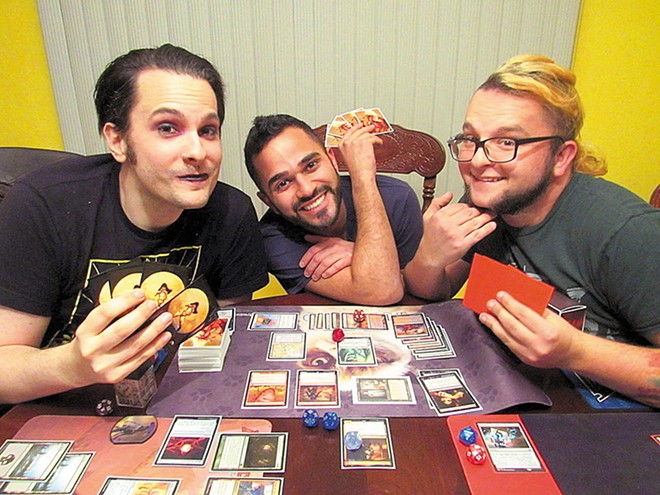 The Kuhlies' practice space is fraught with silent tension.

Emotions have been running high since drummer Sean Torgoley dropped the Armageddon card minutes earlier. It's serious business. "I might not even win, but it's like unlocking a video-game achievement: Make Zach the Most Mad," he says before launching into a stream of trash talk directed squarely at guitarist Zach Paul. They continue to lay (or angrily slap down) cards in turn on the kitchen table in the Ballwin house where they practice every Sunday. Torgoley is taken down early in the game, but the damage to Paul's morale is already done. In the end bassist Joe Roe handily wins while Paul quietly seethes in his chair.

Although the frustration is palpable, after five years of playing together it seems unlikely that the band will break up over irreconcilable differences related to a game of Magic: The Gathering.

In fact, after all the stages of MTG grief have been processed and the trash talk subsides, the members of the Kuhlies are excited. They have finally solidified a lineup (Roe joined the band in August, replacing a string of former bassists) and they're ready to start recording their third studio album, while gearing up to play their first show in seven months.

"It was kind of hard to get anything done with a revolving door of bass players," Paul explains.

The band specializes in an infectious brand of pop-punk that melds Screeching Weasel-level catchiness with garage-rock grit, and if those card-game shenanigans are any indication, its members definitely have the requisite juvenile mentality for the genre. Paul and Torgoley even met when they were, in fact, juveniles, in band class in sixth grade.

"We used to beat the shit out of each other on the bus, and it was really fun," Torgoley explains. "We legit talked about making a band for ages."

The duo initially started out by playing metal together, but after seeing a live show with Teenage Bottlerockets and NOFX, Paul was inspired.

Fun is certainly in no short supply on the band's most recent album, 2016's The Sequel No One Asked For. With song titles including "Your Boyfriend vs My Aquarium," "Legalize Cementland" and "Wish I Was Goth," it's clear the band doesn't take itself too seriously — practically a prerequisite for the simple, poppy guitar riffs and straight-ahead songwriting on display. Vocal duties are shared by all three members, adding a much-welcomed sense of variety to a genre that can occasionally feel somewhat stale. These songs bounce between nasally, lighthearted vocals that call to mind the likes of Blink 182 or the Dead Milkmen (made all the more enjoyable with judicious use of group vocals) to slightly harder-edged rock & roll vocals in the vein of Matt Skiba.

That slight stylistic schizophrenia makes sense when the members of the Kuhlies list their individual influences. Paul cites rock & roll classics such as the New York Dolls and Joan Jett, while Roe mentions more conventional punk-rock fare including the Ramones and the Queers. Torgoley leans more into the early-2000s sounds of New Found Glory or Story of the Year. ("He wants to say P.O.D. and Disturbed," Paul keeps whispering.)

A pop-punk gem on the album, "Yardsale," demonstrates the balance of a band creating something new while not being shy about wearing its influences on its sleeve. Other songs like "What The Fuck Is Going On" have more of a rock & roll affect but manage to stay in line with the rest of the tracks.

So what the fuck is a kuhlie? Paul and Torgoley are avid aquarium and aquascaping enthusiasts, and they named the band after their shared favorite fish.

"Every time people hear the name they think we're talking about how cool we are," Torgoley laughs. "But that's not where it came from; it's the name of a loach."

The members of the Kuhlies are quick to clarify that they don't, indeed, think they are cool. One look around their practice space — littered with binders full of Magic cards, Pokemon decks, energy drinks and twenty-sided die — and it's clear that no one will be mistaking any of them for the Fonz anytime soon.

Cool though they may not be, the Kuhlies do the local scene one better, representing fun, dorky punk rock at its finest.