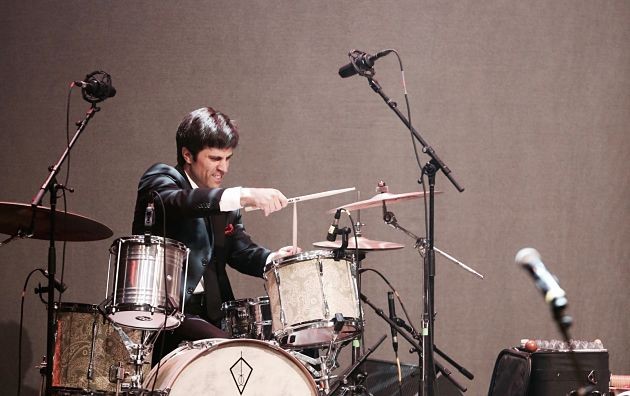 Just two and a half years after releasing Nova, the breakout album that reintroduced the city of St. Louis to the musical force of nature that is Kevin Bowers, he and his band are being called up to the big city.

Bowers and Co. will perform at the vaunted Winter Jazzfest this January, alongside such luminaries as the Bad Plus, Ravi Coltrane, Meshell Ndegeocello and about a hundred more. Over the last fifteen years the New York-based festival has developed a reputation for gathering the biggest names in jazz alongside the hottest up-and-comers — and this year, Bowers' name is included in that latter category.

"We were invited to perform — we've been talking with them and trying to get the band on the bill really this whole year," Bowers says. "I've been to the last two festivals just as a fan. And finally we just heard about it last week that we are going to be playing at the Bitter End on Bleaker Street."

It's quite the development for a group that, despite checking off all of the usual St. Louis milestone boxes (landing a slot on LouFest's lineup, earning multiple nods from this here publication) has yet to perform outside of the city.

"It's our debut in New York City and outside of St. Louis too," Bowers says with a laugh. "So we're looking forward to it."

Bowers' show is a sprawling, theatrical affair involving a veritable murderers' row of St. Louis' finest musicians, including members of the Funky Butt Brass Band, the Playadors, Cree Rider Family Band, Sleepy Kitty, Brothers Lazaroff and many more. With eleven people total filling out the group, it can be something of an unwieldy affair, especially in transportation terms. Bowers says that's why he's aggressively pursued the festival circuit, rather than packing into an Econoline and hitting some clubs.

"The thing is with this band, there's so many musicians that make it what it is," Bowers says. "So I've been really trying to push this, trying to get this band on the festival circuit. And it's tough. It's tough to make it work, with all these musicians who play in so many different groups and that kind of thing. I think for us to all jump in a van and do the club circuit, it's just not going to work that way right now."

With help from a grant from the Regional Arts Commission, the band gets to skip that headache altogether and head straight to New York. The group will be performing on the second weekend of the festival, January 11 and 12 — the "marathon" weekend, as it is known, wherein bands perform at every hour in venues throughout Greenwich Village.

Bowers is excited, and his band is ready.

"It's a big deal for us because it's one of the premiere jazz festivals in the U.S., and just kinda puts us on the national level I guess," he says. "I think this is our time to really shine. To show 'em what we got."

For more information about the Winter Jazzfest, visit the official website.