For the Bottle Rockets, It's Still a Good Time to Be Outlaws 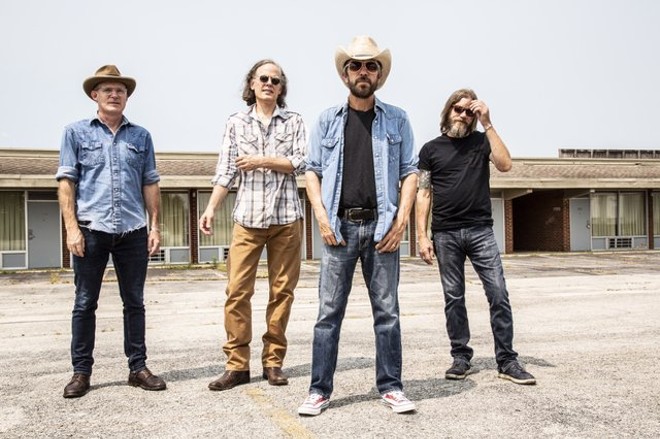 The meeting takes place at Killer Vintage, a jammed-to-the-walls guitar shop in the Clifton Heights neighborhood of St. Louis. Inside you can test drive a Vox Super Beatle amp, roughly the size of a refrigerator and built to overpower screaming teens at Shea Stadium, or lay well-washed hands on a 1966 ocean-turquoise Stratocaster. It can be yours for $30,000. The store isn’t open for the day yet; being inside is like stealing into a secret museum of rock & roll.

Brian Henneman, the principal voice of the Bottle Rockets and its co-leader since the band emerged out of Festus in 1992, has worked at the shop for years. He’s joined for an interview by Mark Ortmann, the other original Bottle Rocket, the band’s drummer and a major partner in the group’s direction and songwriting. They’re talking about the band’s new album, Bit Logic, in some ways its most striking sounding record — “clean and tight” to quote Henneman’s mantra — driven by phase-shifted guitars (an homage to outlaw hero Waylon Jennings) and its fullest embrace of straight-ahead country music.

“We wanted to do something more suited to our age,” Henneman says. “It’s so easy to see 60 from here. There are things I like to see a 60-year-old man do better than other things. We have these country bands: Diesel Island and Colonel Ford. The idea probably started at CJ Muggs, where I’m playing tonight. One night John sat in with Diesel Island, and he’s such a great country guitarist. I thought, ‘Fuck yeah, we should make a country album!’ If I was in the crowd I’d rather hear me sing those kinds of songs, rather than songs that sound like Cheap Trick. We’re an Americana band, and we decided to make an Americana album for a change.”

For more than three decades, the Bottle Rockets’ songwriting has been its foundation, and its approach has always been uniquely collaborative. The band’s members could care less who technically wrote the song; they’re all honed and reimagined to become true to a single spirit.

“I have been as much an editor as a songwriter in this band,” Henneman says. “That tends to make the songs seem like my songs, because I’m the grand editor. That’s partly so I can sing them. Once you start recording they end up different than what you had in your head. I tend to overthink things, tweak them out too far, and I hate when that happens.”

Case in point: “Silver Ring,” perhaps the Bottle Rockets’ prettiest love song (the band has more of those than its reputation suggests), provides the album with a perfect, personal coda. Over a sparely strummed acoustic guitar, Henneman sings, “Gave you a silver ring, but it doesn’t mean I love you any less than gold.” The lyrics were written start to finish by Ortmann, who knew he had something special, even though it took a few years to find a home on an album.

“I write the lyrics first,” Ortmann says. “If I have a musical idea I’ll dabble on guitar. With that one I just had the lyrics and wanted to give them to Brian. When you provide lyrics to Brian he has to be able to relate to the character, to the story.”

“There were few hard instructions that had to be laid down to the band,” Henneman explains. “I had this weird idea, and it gets pretty fringy! Even at the wildest extremes of my imagination, I had to imagine Kris Kristofferson singing these songs. Unlike the other albums, we always had songs pile up. For this one, we had nothing. We said fuck it. We booked the studio before we even had all the songs. Everything was born right before that studio date. We had whole songs, but we may not have been convinced or even known what we were going to do with them.”

What sustains the band, beyond just how tightly its members play together (the current lineup, featuring John Horton on guitar and Keith Voegele on bass, has been together since 2005) is the foundational friendship of Henneman and Ortmann. The two have been collaborating since high school, starting in 1982.

“When you’re in high school, every band you’re in breaks up,” Ortmann recalls. “Back then, Brian was in a punk band and I was in a band doing the hits of the time, what’s called classic rock now. It wasn’t working out for either of us. Scott Taylor [Ortmann’s high school English teacher and the band’s eventual songwriting partner] kept saying, ‘You gotta meet this guy. You should play together.’ We figured, what was there to lose? I went to Brian’s house and played a bunch of Tom Petty and Rolling Stones songs. There are really only two years, from 1982 to now, when we haven’t been in some kind of band together.”

One of the defining songs on Bit Logic is titled “Bad Time to Be an Outlaw.” The song is less a statement about the Bottle Rockets’ place in American music than it is simply about playing music and paying the damn bills. Henneman breaks out his phone to illustrate, swiping through images of every single thing that broke down last year: air conditioner, furnace, car, toilet, the aforementioned phone.

“When shit ain’t broke it’s a great time to be an outlaw!” Henneman laughs. “Now I gotta go $8,000 in debt for an air conditioner. Why didn’t I just write Carrie Underwood a song? My musical integrity flew out the window when I was financing my furnace!”

In some ways, however, it’s never been a better time to be an outlaw. The band has figured out how to make touring work — sharing dates with Americana rockers like James McMurtry, Chuck Prophet and Marshall Crenshaw, finding a home on the SiriusXM Outlaw Country station and landing a spot on last year’s sold-out Outlaw Country Cruise.

“What is outlaw music? What is country?” asks Henneman. “It’s sort of obtuse. Anybody that is out playing music is some kind of outlaw. But the outlaw brand name does steer you in a direction. It lets you know what it’s not — and that in itself can make it a bad time to be an outlaw! But ten years ago there was no cruise for bands like us. So cheers to those who figured out how to market it.”

If the band’s arresting outlaw country turn was premeditated, the central theme of Bit Logic, a kind of resigned resilience in the face of these strange days, was never mapped out. On “Doomsday Letter” Henneman lays into all manner of pessimistic prophets — “There’s way more left in the world that’s glistening, it’s not all ruin,” — and on “Maybe Tomorrow” he laughs at his own foibles and failures, closes up shop and heads into another day.

“It’s a feel-good song about failure,” Henneman says. “There’s this vibe of going as open-mindedly as your closed mind can go into the modern world. It’s sort of a bunker mentality, of laying low, figuring out how you survive weird things. There’s something about it that’s true to our lives.”