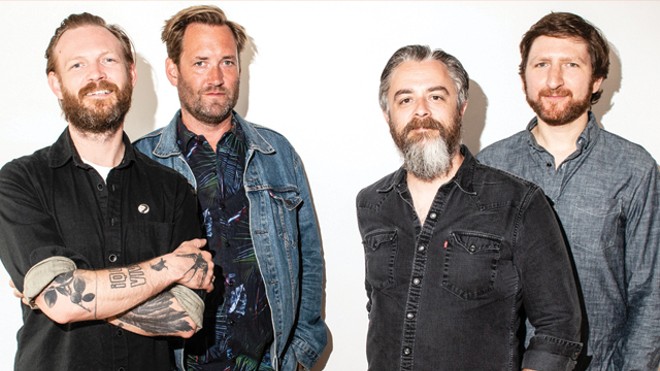 Devon Cahill EP Release Show w/ Tonina, Mt. Thelonious
8 p.m. Off Broadway, 3509 Lemp Avenue. $10. 314-498-6989.
The single thread that connects three of St. Louis’ foremost folk outfits — the Defeated County, Traveling Sound Machine and Prairie Rehab — is singer-songwriter Devon Cahill. And, as part of Letter to Memphis, voted Best Folk Band by Riverfront Times readers in 2015 and 2016, she has even graced the stage at the Sheldon Concert Hall. When I Wake is the solo debut for the young artist, who brings six fresh songs of heartache and hope following the split of her former band. Outside of Cahill herself, there’s no one who knows these songs better than producer Matthew Sawicki, who recorded the new EP this past summer at his Suburban Pro Studio. He’ll be joining her on stage to play keys alongside singer Lacie Williams and multi-instrumentalist Ryan Bouma.

Imelda Marcos w/ Sexual Jeremy, Mother Meat, Skin Tags
9 p.m. Schlafly Tap Room, 2100 Locust Street. Free. 314-241-2337.
By approaching the drum set melodically and, likewise, the guitar with a percussive rip, Imelda Marcos makes a mesh of esoteric jazz. Some might cry “math rock” at the tumbling textures, slingshot loops and jittery vibes, but this playful prog wanders even further outside the box. That’s not to say the shred takes precedent over the songwriting — quite the opposite. It’s just that there are more sections in a single Imelda Marcos song than in some bands’ entire albums. Vocals might be a good entry point into a sound this dense, but this Chicago duo opts to let their hands and feet do the talking, walking and whatever other moves they can cram into a set.

Minus the Bear
9 p.m. The Ready Room, 4195 Manchester Avenue. $20 to $25. 314-833-3929.
For a band as prolific and beloved as Minus the Bear, an announced breakup can be taken about as seriously as DC killing off Superman or Batman. At some point, you know the group will retcon the split with a reunion tour or some twenty-year celebration of its first record. But just for one moment, let’s pretend that this last shot across the United States, a lengthy two-legged tour, really is the band’s final farewell. That makes this show mandatory for even marginal fans, who will be treated to a long set that reaches from every release in Minus the Bear’s long line of records, EPs and singles. This particular night promises to be an intimate one, as it’s the only date on the 30-plus day tour without an opening act — other cities have either Caspian or Tera Melos in tow.

4U: A Symphonic Celebration of Prince
7 p.m. The Fox Theatre, 527 North Grand Boulevard. $35 to $125. 314-534-1111.
With the Roots’ Ahmir “Questlove” Thompson at the helm, don’t expect “the symphony plays Prince” at this celebration of the Purple One’s music. While that would surely be a fine experience, 4U takes it further, serving as the sole estate-approved show of its ilk, with care and curation by a self-professed Prince superfan and historian. This blending of live band and chamber ensemble treats the source with reverence while artfully injecting in-jokes and nods for hardcore fans. A Prince tribute act this is not, and that fact alone might be the key to 4U’s endurance as a celebration, rather than an impersonation, of the Artist Formerly Known As.

Jr. Clooney w/ Jadewick, Choir Vandals, Lobby Boxer
8 p.m. Foam Coffee & Beer, 3359 South Jefferson Avenue. $7. 314-772-2100.
These days the players in Jr. Clooney are most often seen as Le’Ponds’ backing band, yet they still make time to carve shapely songs out of marble. The band layers melodic riffs over fragmented breakbeats that change trajectory with a sharp and deliberate tone. Jazz fans will hear jazz and prog-rockers will get a double dose of braining-bending gnar. Jr. Clooney is at its collective best when playing in a basement or intimate space, and luckily this show marks the first in a U.S. tour where the band will do just that, with Memphis’ Jadewick along for the ride.