The Pink Slip Has Closed, Ending an Era in Brooklyn 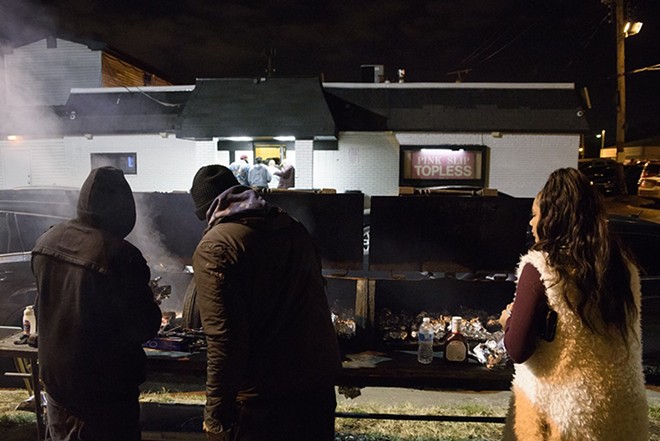 A sign on a window states simply "CLOSED out of business." It includes a phone number for people to call for more information, but no one answers (or has responded to messages left over a two-day period). And the Pink Slip's phone number simply rings and rings. A man patrolling a nearby parking lot confirms that the place closed a few weekends ago.

The Pink Slip was built in 1975 and became an adult club in 1993. At one point, it was quite the establishment — parking lots both across the street and a few blocks away are marked specifically for its overflow.

But as Thomas Crone reported in a memorable December 2017 cover story, time has been hard on the Brooklyn scene. At the time of his visit, Crone reported, the Pink Slip's customers were 95 percent black, writing,


Brooklyn's scene used to be not only livelier, but also more racially diverse. P.T.'s Brooklyn, also known as P.T.'s Classic, rebranded as Black Magic just one year ago, only to later close its doors. Its primarily white sister club, Roxy's, is still hanging in there, though at reduced hours, with a multi-hued clientele and worker base.

Meanwhile, the S&L Rub, an erstwhile massage house, is now an empty lot, the same fate that befell Brooklyn Books after a fire. The 'round-the-clock Mustang Sally's, up the road a piece, became a clearance house for, of all things, outdated hotel furniture; it's now empty, the same status as the nearby club last known as C-Ro's. Many a dollar has been made — and lost — along this short, winding, weedy stretch of highway.

During Crone's visit, an observer noted, "The Pink Slip itself is a community stalwart. The number of people it employs, the money it puts back in the community ... tonight, it has between 25 and 30 dancers alone." No more.

Pour one out for the Pink Slip. And maybe read Crone's story one more time, an elegy to a club that survived a long time in Brooklyn, but didn't live to see 2019.