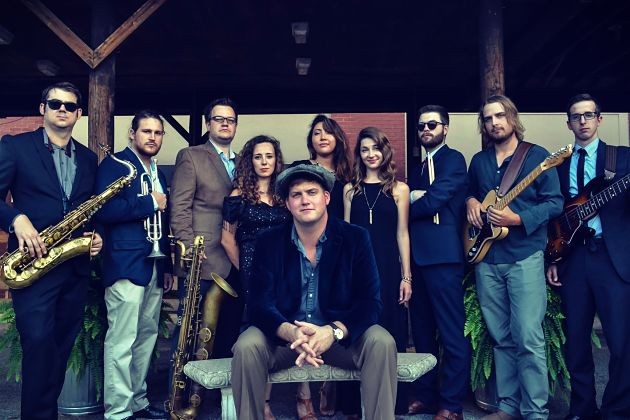 Seated in one of KDHX’s production studios, Andy Coco seems remarkably at home. The bulk of his workweek is spent in rooms like these, surrounded by microphones, soundboards, amps. As chief production officer of the community radio station, Coco’s work involves a variety of tasks, from cutting station interstitials to recording bands for broadcast to keeping the station’s volunteers sounding good on-air.

For two hours a week, on Friday from 2 to 4 p.m., Coco’s own show, The Rhythm Section, brings to life the music that excites him. It’s a mix of soul and funk, with regular appearances from acts as diverse as Orgone, Galactic, Lee Fields, Sharon Jones, Charles Bradley, James Brown and Lettuce. You get the classic names from labels like Motown and Stax as well as young bands utilizing digital-only platforms. On this one afternoon a week, bands like the Meters are treated like the American classics they are.

There’s also an emphasis on bands with local and regional roots. But you won’t hear the many St. Louis groups that would qualify for his show, if not for Coco’s involvement in them.

“I always tell bands when I’m asked to join, that I might be a deficit,” he says. “It’s important to express that you might hear my music [on KDHX], but I’m as hands-off as I can possibly be. I follow the standard practices of being an outside player, and I’m aware of the potential conflicts of interest.”

That’s both simple and complex, as the music lifer has a hand in multiple aspects of the local music scene. Outside the walls of KDHX, Coco operates a small label (Dogtown Records), records groups and plays in a big batch of acts on his primary instrument of bass. How many? Well…

“I think it’s always funny when people ask me how many bands I’m in,” he says. “It depends on which band is actively booking, which is making a record. It’s nice to be wanted in a way. I’m a utility player, not a band leader.”

This weekend, on September 28 and 29, Coco will get to wear a few of his different hats, as Funk Fest 13 plays out over Friday and Saturday night in a three-venue stretch south of downtown: the Broadway Oyster Bar, BB’s Jazz, Blues & Soups and Beale on Broadway. For someone who considers himself a utility player, Coco has put his stamp all over the event, from curating the talent to coordinating production components to playing in a good chunk of the weekend’s lineup.

He’ll be playing with the Service, Hip Grease, Big Mike Aguirre, Funkify Your Life: A Tribute to The Meters and Sean Canan’s Voodoo Players. The pace, he says, is “nice. I like the activity of three sets on one night and two on the other. And all of it’s different.”

But just as he’s quick to point out that KDHX isn’t his personal jukebox, he notes that Funk Fest isn’t about creating a space for his music alone. A total of 24 bands will be featured across the three stages, with a roster that also includes Marquise Knox, Al Holliday and the East Side Rhythm Band, Illphonics, the Jeremiah Johnson Band, Love Jones, Roland Johnson, Torrey Casey and the Southside Hustle, the Provels, the Grooveliner, Scandaleros, Kingdom Brothers, Mz. Sha, Devil’s Elbow, Hazard To Ya Booty and Naked Rock Fight featuring Dawn Weber. Also included is Seattle funk project Pig War, featuring St. Louis expat Teddy Presberg.

Finding enough talent for the event is never the problem. The trick lies in the coordination, the planning, the details.

“A lot of these share members,” Coco says, “so once somebody agrees to a specific set time, I need to build around that. That type of coordination can be a real bear.”

For example, a core of horn players will bounce between stages all weekend long, with Adam Hucke, Ben Reece, Aaron Chandler, Charlie Cerpa and Derick Tramel taking part in multiple sets. (This year, Coco says, the drummers don’t overlap as much, giving him just a touch of planning relief.)

That said, there’s a chance that early next week Coco will be in the mode of deep recovery.

“I sweat it off, then think I’m not ever doing this again,” he explains. The flipside is the gratitude he feels. “A lot of people will make a point to thank me, as they otherwise can’t all hang out with each other” on the same weekend.

“There’s a familiarity with the district that’s helpful for the musicians, a comfort level in knowing how to navigate the stages,” he adds.

So proximity is the key here, with the Broadway corridor providing the rooms for a multi-band fest like this to work. For Coco, the city’s so-called “Broadway Blues Triangle” is the one place that provides a year-round, central location for live music. He sees Funk Fest as a bit of a roadmap to what could be.

“That’s part of the point,” Coco says. “Cementing the district, recognizing that bands are playing there regularly, that they have live music every day of the week. I’m hoping to beat that drum this weekend. ‘These are kinds of bands you’ll see down here every night of the week.’ Their investment in live music is a big deal and facilitates these bands being able to grow and experiment. That goes for Art Dwyer’s Monday night jam at the Oyster to BB’s having something going after everything is closed. Every concierge and booker in town knows where to send people. They’re not sending people to the Landing, as much as I wish it was happening there.

“I try to avoid the term ‘Broadway Triangle,’” Coco says with a laugh. “You don’t want it to sound like the Bermuda Triangle, where musicians go to die. But people do call it that as much as anything.”

While Coco suggests that the next few days will mostly center on promotion, he does talk of how the district could improve long-term, with a stoplight here or bit of traffic calming there, maybe a bit of city-fueled push to refocus gametime activities south of the stadium. He sees the big picture of a crackling nightlife scene that could be reborn, taken back (at the very least) to the popularity of the pre-Ballpark Village days. With a couple of non-blues/funk bars in the mix, too, he reckons that the district is already on its way.

“There’s a bigger transformation going on there, too,” he says. “A lot of good stuff is going on.”