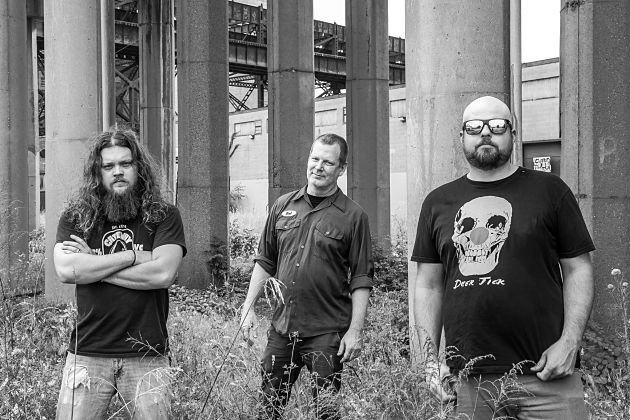 Rob Wagoner’s gig in the mail-order department of Euclid Records finds him spending his worklife in a corner of the shop’s sprawling basement, a magical space unseen by customers’ eyes and teeming with inventory. The rock & roll lifer is slowly working his way through one of Euclid’s biggest buys ever, a massive 125,000-piece collection of 45s. He pauses for an interview only after snagging a few punk EPs for a quick round of show-and-tell, proving that even when surrounded by what looks to be all of the world’s recorded music, favorites can still be found.

Wagoner is also an active musician again these days, and his instrument is bass. His band is Spacetrucker, a “stoner grunge” outfit with a newly released second album, Smooth Orbit, its first outing with Wagoner. As his bandmates arrive, they weave their way through the stacks and good-naturedly bust on Wagoner for his office space, calling him “the cryptkeeper” before settling into folding chairs to talk about getting to this point in their life as a band.

The band’s core had been guitarist, vocalist and songwriter Mike Owen and drummer Bryan “Del” Weitekemper. The pair have a tendency to finish each other’s thoughts, the kind of thing that happens when you share a creative outlet with a friend for years.

Sketching out the group’s history, Owen starts by saying, “Me and Del have been in and out of bands together since we were … shit, I was probably twenty.”

Owen continues: “We’ve been in bands since. We’ve moved some places together. Lived in different cities for a while. Then Del moved back here after living in Chicago for a long stretch.”

The shortest version of what happened next flows kinda like this: Owen’s previous band Fumer was winding down, even as Wagoner’s previous bands had moved into periods of inactivity. Spacetrucker’s prior bassist wasn’t able to continue with the group. And with a practice space near a graveyard just begging for noise to be made, the new lineup of Spacetrucker was born — and almost immediately jumped into live play.

“The newest record,” Owen says, “was 100 percent written with Rob. When we started playing together, we had the seven songs from the first EP. We had about three practices, then a show.”

Unlike a lot of bands that are coy about influences, Spacetrucker proudly wears more than a few on its sleeve, including Sleep, the Melvins, Kyuss, Red Fang, High on Fire, TAD, Nebula, Local H, Fu Manchu, Failure, Nirvana, Karma to Burn and Fatso Jetson.

Beyond that, descriptions of what the band aims for come in varied bursts:

Weitekemper: “If it’s not at eleven, it’s too quiet.”

Wagoner: “We’re into everything from shoegaze to Black Sabbath.”

Owen: “And the MC5. Something that makes you wanna grit your teeth until they break.”

Weitekemper: “Bands like Barkmarket, Unsane, anything from the Man’s Ruin label.”

Owen: “We’re into a lot of the same stoner rock. I remember first hearing Queens of the Stone Age. When they started breaking out, we thought, ‘Oh, shit, we have to do something like this.’ It took us a few years to finally get there, but we really loved those first few Queens records.”

The group went to its recording engineer, Gabe Usery, with some very specific, very simple instructions for how they wanted to achieve that sound.

“When we were making the record, we gave him the direction that we wanted the drums to sound like Unsane’s Visqueen album,” Owen says. “There wasn’t any question then. He said, ‘I know exactly what you want.’”

Vocals aren’t necessarily front-and-center on Space Orbit, an album that has its fair share of instrumental passages. But when lyrics are needed the job falls squarely on Owen, who says they come together piece by piece.

“A lot of the songs are about my frustrations with the world, or with myself,” he explains. “I don’t write too many story songs, but there’s one that stands out and that’s ‘Hotbox Airlock.’ It’s got my favorite lyrics, a story about how modern astronauts are visited by an astronaut from the future. And he brings some killer weed, which he imparts on them, to help avoid the destruction of the human race. That one’s fun. The rest are angrier, I write them down scrawling, like I’m gonna punch through the piece of paper.

“I want every word to count,” Owen adds. “We can write a song in 40 minutes, but lyrics can take twelve weeks to finish. I’ll sit there with, like, four lines down.”

Instrumentally, Smooth Orbit has what Wagoner calls a few “bells and whistles,” but nothing that seems critical when the band takes the stage as a three-piece, fully electric rock & roll band. Owen adds some acoustic guitar parts on a couple of tracks, while omnipresent St. Louis cellist Jake Brookman adds some flourishes. The album, which was originally intended to come in at around eight tracks, wound up at ten thanks to a last-second burst of inspiration and new songs.

“Sparks flew. Emotions ran high,” Owen says with a touch of dry humor. “And all of a sudden, we thought, ‘We should put this one on the record.’ Usually, I have all of these snippets and riffs on my iPhone, after I used to use one of those interrogation-style tape recorders. I have these riffs, then I usually just bring them to Del first and we kinda have this back-and-forth thing. It’s unspoken, really. We’re rapidly like ‘Yeah, yeah, yeah, yeah, yeah.’ Once we have that, Rob adds a bassline and puts in two cents with structure.”

Wagoner, for his part, is just happy to be in a writing, recording and gigging band again.

“The thing that’s been a lot different with this is that we practice twice a week,” he says. “I haven’t been used to that and it really is a pleasure. If I’m not progressing or creating, I kinda go nuts.”

“Playing in this band is our zen,” Weitekemper adds.

If you listen to Smooth Orbit in just the right head space, you’ll get there, too.