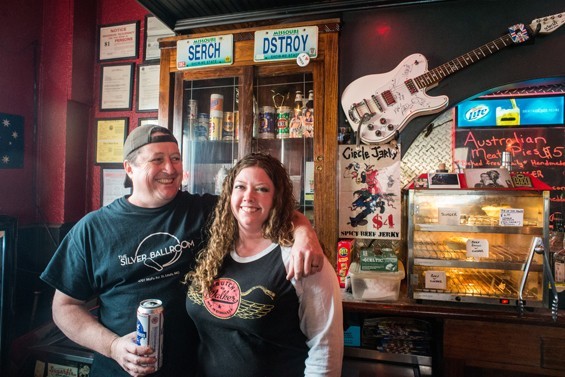 Now, with Silver Ballroom owners Steve and Shelly Dachroeden taking the reins of the Waiting Room from original owners Jimmy and Shannon Nichols, that comparison is more apt than ever. They will join longtime bartender Scott Fogelbach, who stepped into the role of business partner back in June, in running the watering hole.

"We're excited," Steve Dachroeden says of the plans. "We talked about it a long time ago, and then I think Jimmy was ready to move on. He kinda made us an offer I really could't refuse. And Scotty is gonna be in there helping me out doing stuff, so that's always cool. He's not going anywhere either."

The Nichols announced in February their intentions to sell the bar, citing the toll that late nights and long hours took on their ability to spend time with their young daughter, Stella. Even with that admirable motivation, it was still difficult to move on.

“We used to say owning a bar was the hardest thing we’ve ever done," Jimmy told RFT at the time. "But I think selling it is going to be even harder."

Still, it's hard to imagine they could have found a better set of buyers. The Dachroeden and Nichols families have been friends for years, even before the Waiting Room opened, Dachroeden says. And Dachroeden and Fogelbach have known each other for more than two decades. Fogelbach has even served up suds at the Ballroom from time to time.

"I think it's great," Fogelbach says of the new partnership. "I love Jimmy and Shannon to death and I know that they are missing some time with Stella and everything." The Dachroedens, he says, will bring some new, exciting life into the bar.

The group has renovations planned for the space — first and foremost, the pool table in the front room will be moved out, and in its stead will be a slew of new pinball machines, similar to the ones the Silver Ballroom is known for.

"That whole front section will be, I'm guessing, ten — minimum of ten, maybe even more," Dachroeden says. "Whatever I can squeeze in that front section before you get to the bar."

In addition, the interior will get a facelift, with fresh paint and new tables and chairs as well as updated lighting. Dachroeden says the bar's massive back patio will also be renovated and better utilized as well. He expects the bar will be closed for about a week in mid-October while that work takes place.

"I'm not gonna make it too fancy," Dachroeden promises, "but I'm gonna just make it a little cleaner."

Perhaps most importantly, the Waiting Room is going to start selling the absolutely delicious Australian meat pies the Silver Ballroom is known for as well. North county, frankly, is not ready.

"We'll have the pizzas like we had before, but we're gonna have those meat pies, which I think is gonna go over pretty well," Fogelbach says. "There's a lot of people out that way that don't get down to the Ballroom, so they haven't experienced those things yet."

All told, Fogelbach is looking forward to the future with his new partners.

"I got a lot of high expectations for it," he says. "I think it's gonna be fun."