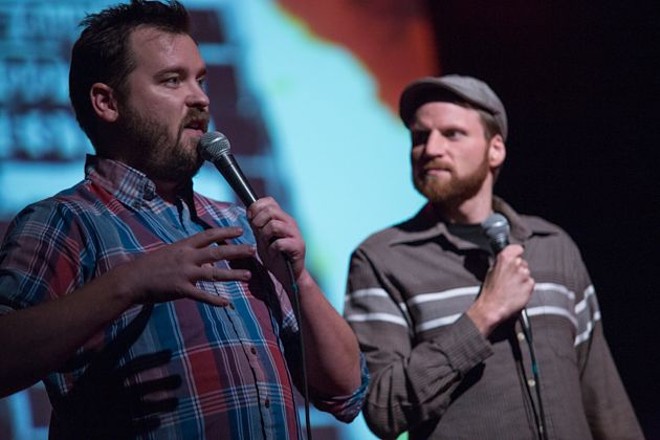 It’s obvious in talking to Nick Prueher that he’s a man who’s found a calling, unlikely as it might be. Along with lifelong friend Joe Pickett, Prueher has been involved in a project that dates back to either 1991 or 2004, depending on which birthdate you use.

It was in ’91 that the pair began collecting offbeat VHS tapes as a hobby. Their first score came in the form of a McDonald’s training video called “Inside and Outside Custodial Duties,” which is about as pedantic, and amusing, as you might imagine. (To this day, instructional videos remain Prueher’s faves.) And in 2004, the Found Footage Festival was born, with a show in their adopted hometown of New York City. The duo has spent the last decade-plus cutting together versions of their work for tours that take them on the road for up to 130 showings a year.

Audiences come in all shapes and sizes, Prueher says, including “older people and younger people and 30-something guys who look like Peter Jackson before he lost all that weight.” And any town, on any night, can provide them the best gig of the tour.

“There really isn’t a bad town,” he says. “Austin, as you might expect, is always good. New York, where we live, and San Francisco are always great. But then there are towns like Tucson, Arizona, or Madison, Wisconsin, that really turn out well. And we love coming back to St. Louis. We’ve always had good shows there.”

For their September 16 show at Delmar Hall, the pair is including local themed touches, with bits culled from two VHS scores: “St. Louis Earthquake Survival Guide” and “How To Meet Women In St. Louis.” Whenever possible, the pair attempts to include some local flavor. And they’re not above using a private eye if it means uncovering a person they’ve found on video who they’d like to highlight at live events.

Asked how folks react when a hip production company reaches out to inquire about a relatively ancient recording, Prueher says, “Generally, people have long since forgotten about the video. They’re like VHS skeletons. Many of these were promotional videos, or someone who made a video about self-defense or a singing instructional tape. ... I don’t think anyone’s offended. Once they’re at the show, they can laugh at it, too. They’re little celebrities in their own hometown for that day.”

Still active in fishing for tapes, the pair finds a few things to be true about America, Prueher says. Stereotypes be damned, he says, “New York and Los Angeles were hubs for public-access show footage, of which we’ve found a lot in thrift stores or have had donated to us. You find new-age videos in the desert, in New Mexico or Arizona, commingling with energy-crystals types of videos.

“In the Midwest, a lot of training videos; there seem to have been a lot of headquarters in cities like Omaha, Minneapolis and outside of Chicago. In the South, you’ve got a lot of religious tapes, from ministries and places like that. Sometimes a find really does tell a story. In Atlantic City, on the top shelf of a thrift store were twelve different tapes about ventriloquism. Clearly this was dropped off by someone who failed at ventriloquism, or who now has their own show in an Atlantic City casino.”

Pickett, a contributing writer for the Onion, and Prueher, formerly of The Colbert Report and Late Show with David Letterman, have taken stabs at extending the format, not only creating the touring clip shows but moving their VHS collection into new, extended contexts or modern twists. Most recently, the pair has been livestreaming on YouTube with their Tuesday night VCR Live Party! series.

Within the last year, Pickett and Prueher also settled a lawsuit filed by a Wisconsin TV station after their fictional alter-egos — a pair of “strongmen” known as Chop & Steele — trolled its morning show. The two would appear on various morning shows and prove inept at the whole fitness thing, leaving red-faced hosts in their wake; a Wisconsin station wasn’t amused. The Chop & Steele videos, taken off YouTube during the litigation, are back online and quite amusing. 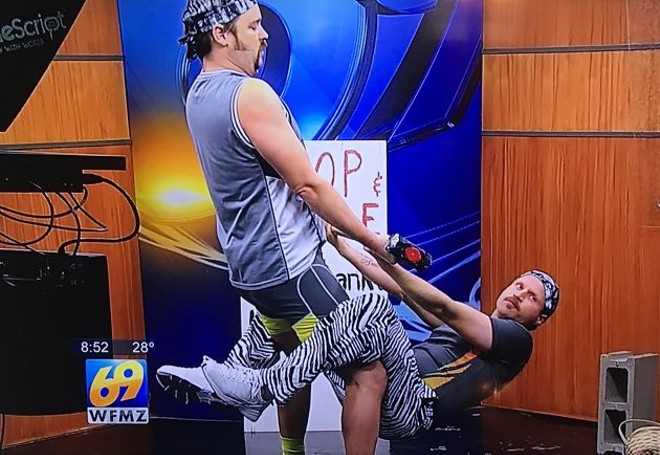 They’ve also worked in longform documentary making, with arguably their best-known work coming in 2009 with Winnebago Man, a doc built around the “world’s angriest person,” Jack Rebney. In this one, the pair (using their private eye) tracked down an infamous internet character, who had been captured cursing during breaks in filming for an RV commercial. In finding and cutting together the footage, they unknowingly released a popular, early YouTube viral video and ultimately found Rebney living in near-solitude in northern California.

“The ending of the film,” Prueher says, spoilers be damned, “is of him hugging us. If the angriest man in the world could hug us after a show, we’re doing something right. It shows that we’re not mean-spirited. It’s a celebration of all this weird stuff.”

Prueher, always amusing, is thoughtful in summing up possible next steps for himself and Pickett.

“Well, we’ve just started doing the live internet show,” he says. “We finally got an office, where we put all the videos on our shelves.

“So let’s, every Tuesday at 9 p.m., broadcast as we watch videos. It’s stuff we’re usually doing all alone. It’s a new, fun outlet, more loose than live shows. We get to sit around, pop in videos for ourselves. People like David Cross have come by. We’ve been developing something for TruTV. There’s so much material that it could easily translate into a TV series.

“And after that,” he says, “theme parks is the next obvious step. Then we can just die.”