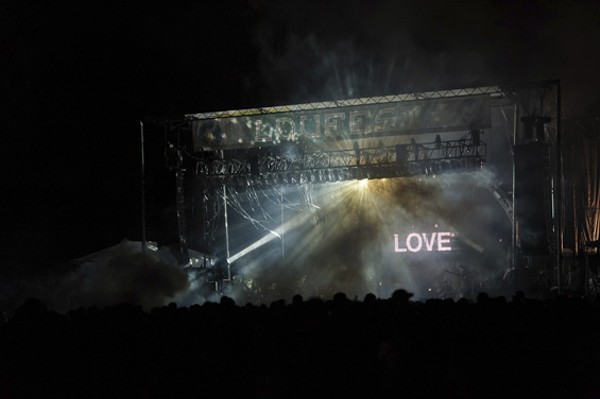 Complaining is the official sport of St. Louis. We are international-champion, gold-medal-winning, legendary complainers. But this city is also full of some of the most generous, kind-hearted, thoughtful and community-driven people you’ll ever find.

That’s why in the hours after the LouFest cancellation, I wasn't surprised to see people whining about it on social media — and then immediately coming together to try to help the vendors, bands and workers who were left holding the bag.

It was a sight to behold. Seemingly the entire city immediately shifted into gear and mobilized to try to make things right, not only for the disappointed ticket-holders but also for the myriad local businesses that had been planning to service the event. With only a few days' notice on the cancellation, many business owners thought they were… well... fucked. But people all over St. Louis stepped up to help.

One of the first touching stories came from family-owned Gioia’s Deli in the Hill neighborhood. The deli had bought and prepped 600 pounds of beef in anticipation of feeding hungry LouFest attendees; co-owner Alex Donley told us that a few hours after the 2 a.m. announcement that the show was cancelled, his phone started ringing with local businesses offering to “help buy his excess product.”

Touching stories like that came in so quickly that our newsroom scrambled all day to try to keep up. As our social media feeds, email inboxes and phones were bombarded with tales of people trying to help out, it became apparent that our LouFest fallout coverage would be dominated by heartwarming stories featuring St. Louisans going out of their way to support impacted former LouFest-ers.

That’s why I was nothing short of disgusted when I read a Facebook post yesterday afternoon from an out-of-touch local business owner. The cancellation, he wrote, "reflects poorly on the St. Louis community and it's an embarrassment that we can't get our shit together enough to support a truly great annual event like LouFest." He continued, writing that "LouFest belonged to the city of St. Louis and St. Louis dropped the ball, not the organizers."

The St. Louis community spent all damn day trying to fix a mess brought on by organizers who couldn't pay their contractors, and this guy is going to lecture us that “it's an embarrassment that we can't get our shit together” and that we "dropped the ball" somehow?

What city do you live in, dude? Because in my St. Louis, the community was not only ready to bounce back but also jumped in to help others absorb the hit. They set up new shows for touring bands. They set up a whole damn free showcase for local bands. They organized their own smaller festivals in Forest Park. They promoted Pu Fest, the DIY LouFest alternative. And independent citizens not only arranged to show their personal support but made sure that their friends also knew to spend money with local food and beverage vendors who would’ve been providing for the LouFest crowds this weekend.

And they're working on more events even now. Even Chuck Berry's dead ass is recommending a rescheduled show from beyond the grave. So, no, it was not a sad day at all, but a day when St. Louisans rushed to be heroes to their neighbors in need.

Nope, this little LouFest setback won’t keep locals low for long. When St. Louisans get knocked down, we stand right the fuck back up. Our community is never stronger than when it is facing adversity — when bad things happen, we stick together and pull through. Yes, we like to complain, but our altruism and our indomitable spirit almost always pull through regardless.

So we send our thanks to LouFest for the accidental reminder that we’re amazing. Maybe enough of us didn't buy tickets in advance this year to make things pencil out. Maybe we are all too quick to turn to point blame. But when it really counts, when restaurateurs and bands and small business owners need a boost, we're there for them — with vocal support, with sympathy, with patronage. And isn't that worth celebrating?