The 5 Best Concerts in St. Louis This Weekend, August 31 to September 2 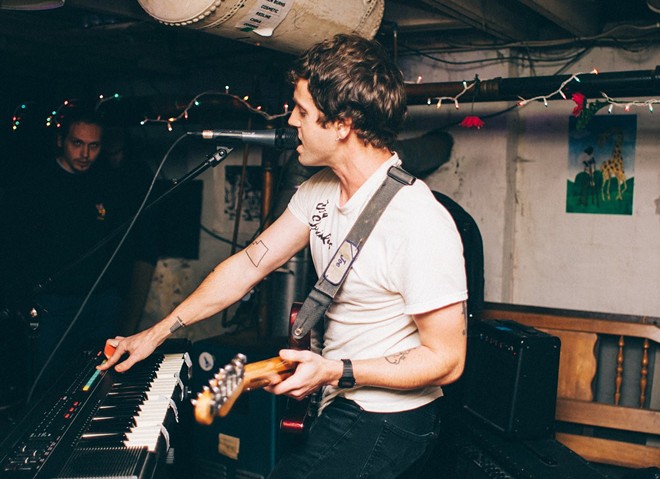 Dabor Day Disco Dance Down w/ DJ Limewire Prime and DJ Nebulosa
9 p.m. RKDE, 2847 Cherokee Street. $3. 314-669-9240.
Without Kaleb Kirby and Julio Prato, St. Louis would be a duller place. These two are, at least in part, responsible for A Leaf in the Street, Kids and Nebulosa, in addition to numerous other bands dwelling in and around Cherokee Street. Behind the turntables, each has an alter ego that digs through crates and deep cuts to provide a cerebral night of dance music with disco at the core. Kick off the long Labor — sorry, “Dabor” — Day weekend with a vibe that will last until Tuesday morning.

Frankie Valet w/ Let’s Not, Aquitaine
9 p.m. Schlafly Tap Room, 2100 Locust Street. Free. 314-241-2337.
With a 4:3 aspect ratio and just the right kind of blur, Frankie Valet’s new video for “Why Blue” could be a promo tape made to play on ‘90s-era MTV. Waves flow over a wash of nostalgic clips for a layered style that fits the track’s warm production. It’s an effective single for Stop Apologizing, the eight-song limited-edition cassette being released at tonight’s Schlafly Tap Room celebration through It Takes Time Records. Soak in the audible exposé of fuzzy, lo-fi garage pop.

No More!: A Benefit for the Women’s Safehouse of St. Louis
7 p.m. Foam Coffee and Beer, 3359 Jefferson Avenue. $5. 314-772-2100.
Gateway City Hardcore is a collective that pairs touring punk bands with locals for solid shows year round, and No More! is just the first in a line of benefits slated for the latter half of 2018. The trio of acts on hand range from the bruising hardcore of Redbait to the dreamy indie rock of Daytime Television, with Blight Future sitting in the center of a Venn diagram of said genres. But while that’s a stellar lineup any day of the year, this is more than just a show. With the presence of local crisis center Safe Connections and proceeds going to Women’s Safehouse of St. Louis, there should be no doubt about the focus of the night.

The Art & Soul Live Exhibit
7 p.m. .Zack, 3224 Locust Street. $20 to $40. 314-533-0367.
.Zack feels tucked away in the heart of Midtown, an island of emerging artists. Take the Art & Soul Live Exhibit as a coming-out party of sorts for all the ideas those artists have incubating. Offerings will be split three ways between three floors to offer three specific vibes. The All Purpose Band will provide a live soundtrack with its futuristic funk-fusion. Live-painting, henna tattoos and a caricature artist will inject the show with eye candy to match the madness. From top to bottom, it’s a varied night that celebrates the intersection of art and music in St. Louis.

Joey Sprinkles w/ Shitstorm, Brother Lee & the Leather Jackals
9 p.m. CBGB, 3163 South Grand Boulevard. $5. 314-773-9743.
Joey Sprinkles’ self-description of “Cleveland suburbanite wannabe lounge singer bent on bad keyboards” would be spot on if it didn’t totally undersell his dense power-pop. We get it, no one wants to come off as braggadocious, but he could boast a little more and no one would bat an eye. Not so much a far cry from his former band Chomp — a punk outfit out of Columbus — Sprinkles marries a frenetic sound with an intelligent sense of pop and structure. Any of his songs could be whittled down to the most minimal melody and still carry the weight, but thankfully everything here is delivered with plenty of fuzz and crunch.