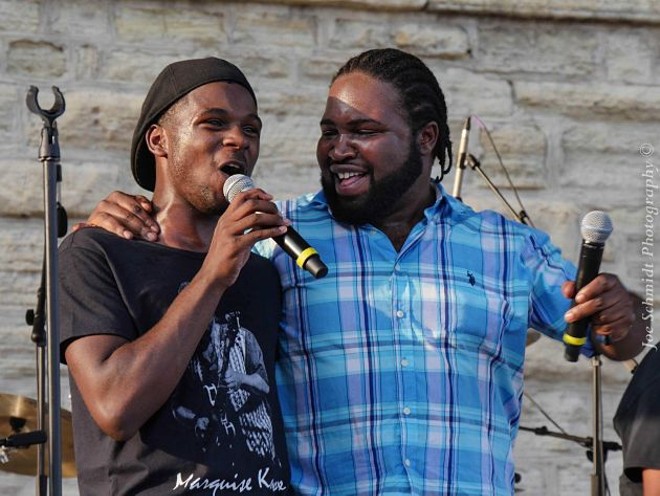 John May has maneuvered around BB’s Jazz, Blues & Soups enough times in his life that he can multi-task there with ease. That might be expected at 10 p.m., when bands are playing their first sets and a bar full of diners are on-hand to enjoy local, live music. But he can juggle things when it’s 10 a.m., too, like when a band needs to soundcheck and a TV crew’s about to show up at any moment. Flicking on power strips, adjusting the monitor mix, tweaking the stage lights, the BB’s mainstay can even brew up a pot of coffee while getting a group onstage and sounding great in a matter of minutes.

It helps, of course, when the band is skilled and a backline of instrumentation is ready, and that's the reality on a recent Wednesday morning. Onstage, dressed in black slacks and shirts are drummer Marcus Webster, guitarist Mitch Montaldo, bassist Lonnie Poe Jr. and saxman Art Pollard. The latter’s son, and the only individual varying from the all-black uniform, is the vocalist, “Little Dylan” Triplett, who is enjoying his last full day in St. Louis before heading for Greenville University in Illinois, where he’s pursuing a music major.

Having just turned eighteen, Dylan is by far the youngest player in the room in a lot of settings like this one. He’s been gigging more under his own name in 2018, while still sitting in on jam sessions and guest appearances. A series of firsts have come in just the past summer. His first website’s gone live (found at reallildylan.com). He’s performed his first set under the St. Louis Arch. He’s scored his first TV feature, via a KSDK piece that used his mid-morning cameo at BB’s. Though not exactly a first, he turned eighteen. All while prepping for college, which he swears hasn’t stressed him out much, if at all.

“I’ve had time to prepare myself, mentally and physically, for college,” the Edwardsville resident says. “I’ve been doing some jam sessions with Kim Massie. We played at the Arch. These past couple weeks have been about trying to get it all in before I leave. It’s amazing, it’s awesome. It’s mind-blowing that this has all actually happened for someone. And that it’s happened to me is pretty awesome. I’m kinda ready to conquer the world now.”

Those words, on paper, could come off as brash. But in-person, it’s just part of his youthful energy. He’s confident, but not cocky. Certain about his future, but open to things changing. But that it will happen for him? There’s no doubt, no uncertainty.

Asked if he likes things to happen organically or with a big, concerted push, Little Dylan says, “It’s a little bit of both. I have goals for myself. My goals for the summer were to make an EPK, get some nice T-shirts made, get set up with a label. Now that I’ve signed up with Marquise Knox, that was probably the biggest one. Getting on the Big Muddy Festival and Blues at the Arch were great. It feels good to know I had some part in all of that.”

Getting a solid live band together was another piece of the puzzle, and Triplett and Pollard pieced together exactly the lineup they wanted with Poe (who attends church with them), Montaldo (found through a jam session) and the well-traveled Webster (whose reputation lead them to him). To date, they’ve been rehearsing once a week, and the goal is to keep that Thursday tradition going, with Triplett in college less than an hour’s car ride away. Based on the soundcheck they threw down at BB’s, the band’s plenty rehearsed, playing some material which might surprise a bit.


For example, the first cut was immediately recognizable, as Triplett played the first notes of Elton John’s “Bennie and the Jets,” which the group made their own. It’s a people-pleasing cut that make fans of the original happy, be it in a festival or club setting. Working in a more traditional blues idiom isn’t an issue, either, as the band allows songs a chance to breathe, while giving every player moments to showcase their skills. It’s a versatile, multi-generational band with an ability to cross genres. That’s a key for Triplett as he plots his course.

At his age might suggest, Little Dylan’s not unfamiliar with modern ways of getting noticed. He’s tried his hand at competitions once, trying out for The Voice at age sixteen. It was a worthwhile experience, giving a life lesson if not a recording contract.

“They rejected me,” he says, “and it didn’t feel too good. But that made me push myself harder at the same time. I’ve gotten a lot better since then, my voice has grown a lot since I was sixteen. Maybe I’ll try it again in a year and a half, see where it goes.”

If not gaining a career through a lightning strike, he’s content to let things play out the old-fashioned way. He’s committed to getting his degree in music. He plans to be at band practice, even if schoolwork’s pressing. He’s ready to commit every summer to his career, with the rest of the year given to his studies.

At the ripe age of eighteen, he’s viewed the last two years as a period of trial and error, of learning and discovery. It’s a perspective that will change in another two years, of course, all of us vessels of self-discovery. But he’s had enough of the blues in his life that he can already give some sense of what’s been and what’s to come.

“It’s kinda funny,” he says. “I was thinking back to two years ago. I told myself I’d do something with my life. I learned BB King’s ‘Don’t Answer the Door;’ it was the first blues song I learned and played out. I thought, ‘Wow, that sounds really good.’ It’s amazing to have that feeling. When we’re playing and my shirt’s soaked in sweat and people are applauding, I know I’ve done my job. I’m not all the way there yet, but I’m pretty pleased with where I am right now.”

Little Dylan will play the Big Muddy Blues Festival on Saturday, September 1, with a 6:15 to 7:30 p.m. performance at the Morgan Street Brewery.