The Democratic Party Is Secretly Fleetwood Mac. Here's Why 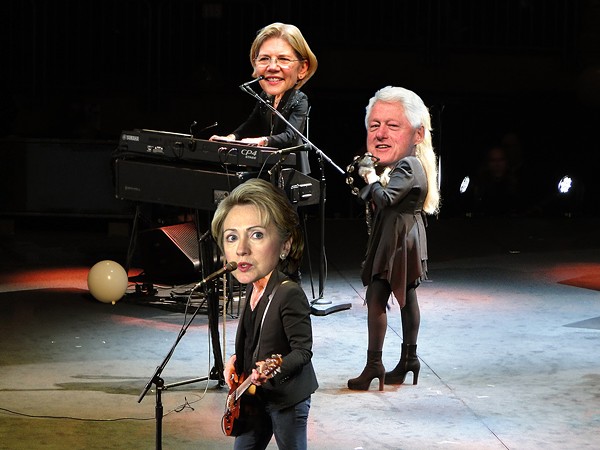 Time to tell the truth, Dems. You're really Fleetwood Mac, aren't you? You must be, with the way you're all screwing each other.

The more we think about it, the more the truth underneath all the gold dust and hanging chads seems obvious. Check it out:
But on the real: Bill and Hillary Clinton are totally Lindsey Buckingham and Stevie Nicks. Power couples who have been together since the 1970s, both formed an unbreakable bond while using others to claw their way to the top. And even if it seems to outsiders that sometimes they're at odds, that’s all part of their game. They'll always rejoin. They are a package deal, stuck together forever in the bonds of bigger business.

Bill Clinton is totally Stevie Nicks. They both have weird scratchy voices and they’re both flirts who are allergic to keeping it in their pants. And Hillary is an easy fit for Lindsey Buckingham. First of all, she’s always standing on stage going on and on, just like one of Lindsey’s wanky guitar solos. They’re both fans of a suit jacket and they are both forever having to hold themselves back when what they really want to do is just freak the fuck out.

And now Buckingham is back to a solo career, just like Hillary has returned to solo walks in the woods. But these are all strategic moves. They'll return in the next chapter. The machine stops for no one and they are recurring characters. The DNC (and the Mac) must soldier on.

Once the main characters start taking their places, some things become apparent. Like Mick Fleetwood is obviously Barack Obama because, first of all, have you seen those big balls? And both Mick and Barack kept the beat steady and were the solid backbone of their groups, so they have that in common. They’re also both from another country. (Kidding! We miss you, Obama.)

So who is Elizabeth Warren? She could be Christine McVie, because at first she seems unnecessary, but once you really listen, you realize that every time she opens her mouth she drops bombs. You’ll be like, “What is she moaning about?” and then something clicks and you're like, “Sing it, sister!”

Or maybe Elizabeth Warren is newly-minted Mac member Neil Finn. Oh, yes. That must be it. They both have the same haircut, they’re both far too talented for their current jobs and they’re both trying to catch the deluge in a paper cup.

May we we propose "Don’t Dream It’s Over" for Warren’s 2020 presidential campaign song? (“They come, they come / To build a wall between us / We know they won’t win.”) And while we’re on the topic of campaign songs, it’s more than a little odd that out of all of the songs in the entire world, Bill Clinton picked Fleetwood Mac’s “Don’t Stop” as his campaign song. Hmmm. He either is Stevie or he totally just wanted to meet her so he could try to tap dat.

Anyway, we have a message for both groups:

We're on to you and your sweet little lies. You can keep pretending you're hopelessly fractured, but we know the truth. Democrats. Fleetwood Mac. Whoever you are, you need to work together for the common good. Don't be such drama queens all the damn time. We need you. And please don’t stop thinking about tomorrow.

P.S. Just in case you're still hungry for more keen political observation: If Fleetwood Mac is the Democratic party, then Peter Green is Andrew Jackson because he started it all. And while Bernie Sanders might also have gotten his start in the 1970s and he plays all of the same venues, he’s not in Fleetwood Mac. Since Sanders is good for everybody and is the chosen favorite on a global scale, he is clearly ABBA. Duh.