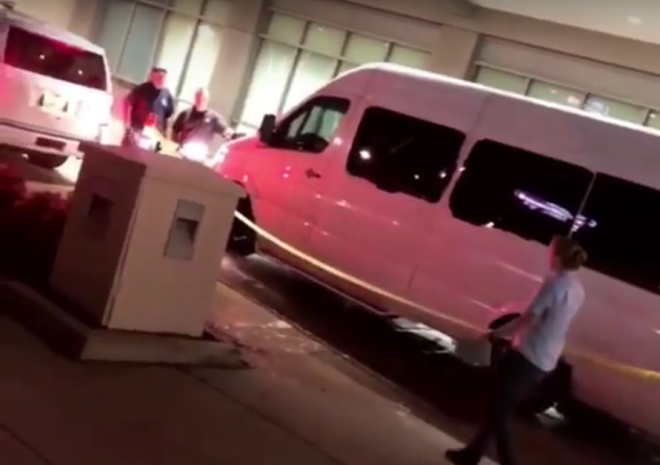 A van transporting Florida-based rapper/R&B singer YK Osiris was shot up following his performance at the Pageant Wednesday night, according to multiple posts by the musician on social media and confirmed by police.

The nineteen-year-old rapper, real name Osiris Williams, was in town opening for the sold-out Lil Baby show, along with City Girls, Kollision, B La B and 24 Heavy. Early Thursday morning he posted a photo to Instagram of a bullet-riddled white Dodge Sprinter surrounded by yellow police tape and parked just outside the entrance to the emergency room at Barnes Jewish Hospital.

"WHEN U A CHILD OF GOD 🙏 AND PROTECTED BY THE BLOOD OF JESUS 💯 THERE IS NO WAY THE DEVIL CAN KILL YOU ‼️‼️ THE DEVIL IS A LIE 🗣🗣 U CANT STOP ME ‼️‼️‼️ #THANK U JESUS🙏🙏," read the caption accompanying the photo. (Later this morning, the Instagram post was deleted, but an identical post remains live on Twitter.)

WHEN U A CHILD OF GOD 🙏 AND PROTECTED BY THE BLOOD OF JESUS 💯 THERE IS NO WAY THE DEVIL CAN KILL YOU ‼️‼️ THE DEVIL IS A LIE 🗣🗣 U CANT STOP ME ‼️‼️‼️ #THANK U JESUS🙏🙏 pic.twitter.com/K5aLfqxsMe


The St. Louis Metropolitan Police Department says the shooting took place on Highway 64 near Jefferson Avenue on Wednesday around 11 p.m. The van was traveling from the Pageant back to a hotel at Market and Jefferson for the night. As they were driving on the highway, a grey four-door sedan apparently pulled up alongside them, and one or more of its occupants began opening fire. According to the police report, "the vehicle sustained heavy ballistic damage on the driver’s side of the vehicle."

Williams and his people were able to transport themselves to the hospital. Four victims, ranging in age from 18 to 53, suffered gunshot wounds to their limbs; they are listed in stable condition.

In what appears to be a Snapchat video later uploaded to YouTube, bullet holes can be seen all across the rapper's van, on both the passenger and driver sides.


In another video, Williams can be seen wearing a Barnes Jewish Hospital visitor's pass — seemingly indicating that he himself was not struck in the shooting — with the date of 8-23 written on it.

"God's so good, man," he says in the video. "My car got shot at twenty times. When God got a plan for you nobody can take it from you. And when you're God's child, for real, pray it up."

The video of Williams speaking to the camera can be seen at the 1:35 mark.

St. Louis police were unable to provide any details about the suspects in the shooting. The investigation is ongoing.

The full police report is below:

Officers responded to a call for a shooting where the victims were shot while traveling eastbound on Highway 64 near Jefferson. The victims drove themselves to and area hospital. The victims advised they had left the Pageant music venue and were heading to their hotel at Market and Jefferson. While on the road a grey four door sedan, drove alongside them, and began firing into the driver’s side of the victims Sprinter van. The vehicle sustained heavy ballistic damage on the driver’s side of the vehicle. Four victims sustained gunshot wounds to their limbs and are listed in stable condition. The other two did not sustain any injuries. This investigation is ongoing.

[Correction: An earlier version of this story said that five people were shot in the incident. It was actually four. We regret the error.]