All is quiet at 2720 Cherokee Performing Arts Center on a recent Wednesday afternoon, save for the sound of bottles and cans being loaded into boxes behind the bar. The space in front of the stage — a stage which has hosted countless bands over the last ten years — is now crowded with stacked chairs and bar stools, ready to be sold. The room is dark, save for the sunlight streaming in from the venue's front windows.

2720 Cherokee, long a home of live music in south city, is closed.

The venue hosted its last show on Saturday, August 4 — a Kiss tribute band, with a Ramones tribute as its opener. It was an inauspicious last hurrah for a space that has played host to some truly huge acts over the years — names like Pete Rock & CL Smooth, Buckethead, Ghostface Killah, Mobb Deep and countless others. There wasn't even an official announcement that it would be the last show, just rumors and whispers that have only now been fully confirmed.

But according to Kaveh Razani, 33, who has helmed the ship for the last two and a half years, this isn't the end — more like a new beginning. 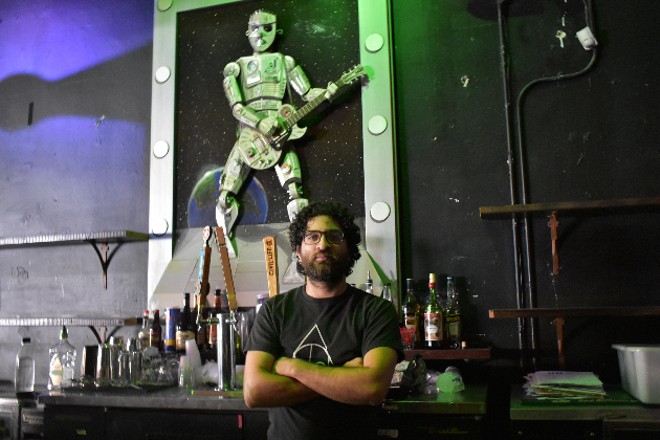 "I'm highly confident that this will stay a music venue," Razani says, noting that the space has already seen some potential buyers since it quietly closed its doors. "Cherokee won't lose a music venue. But my priorities have shifted."

That shift came about six months ago with the arrival of Razani's firstborn son Keyumars. Since becoming a father, Razani says he simply doesn't have the time necessary to devote to the business — though he doesn't intend to drop off the map entirely.

"I'm gonna probably get into production and catering. I'm gonna focus on being a dad, but I've also got a building and a liquor license down the street," he says, referring to his longtime operation Blank Space. "I want to start catering alcohol to places — art shows, fashion shows, whatever types of events that are in spaces that don't already have a liquor license. I'm gonna have a bunch of sound gear, so I'm gonna potentially start a production company with that. Maybe get into some artist management, that kind of thing."

Becoming a family man has affected Blank Space as well. The venue, which was recently converted into arcade bar RKDE, has ceased being open during regular hours and now will open only for shows, much as it did during its run as Blank Space.

Some of the games within, he says, will find new homes.

"Me and DJ Crucial are gonna start using the games down there that aren't getting a lot of play," he says. "We're joining forces with Moonbase and Earthbound in Soulard at the Preservation Hall, they got that new location down there. We're gonna put a bunch of games in there. I feel like an e-sports bar/lounge is kind of the perfect place for arcade games."

And so RKDE will go back to being available to be booked for events of any shape or size, but without regular business hours. For Razani, it's just easier for him to manage with his changing lifestyle.

"My whole perspective now is to use the resources I have, the equity that I have — a liquor license, a bunch of arcade games, a sound system — and try to do that more on my terms, on my schedule, rather than having to be open seven days a week or needing to have to book twenty shows a month to stay viable," he explains. "I think that's the kind of direction I'd rather go in."

2720 Cherokee will be holding a closeout sale this Thursday and Friday from 4 p.m. to 7 p.m. and on Saturday and Sunday from noon to 6 p.m. According to Razani, everything must go.

"I'm trying to be a family man," he adds. "My wife has made a lot of sacrifices especially with her career to be here, and she's about to go back to work full-time and I'm gonna be a full-time dad. That's really what it is. I can't be a party man."